Daniel Ortega gets an oil-powered boost

And guess who he’s getting it from… 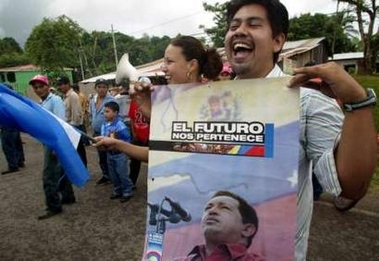 Yes, once again, a certain Venezuelan saves another country’s day:

Venezuela was due to ship 350,000 barrels of oil to Nicaragua yesterday in an effort to boost the election campaign of Daniel Ortega, who hopes to lead the Sandinistas back to power next month.

The heavy diesel was intended to alleviate power cuts in the impoverished central American country and to show the benefits of friendship with Venezuela’s president, Hugo Chávez.

Mr Chávez has openly backed Mr Ortega, a fellow leftwing critic of the United States and frontrunner in the November 5 vote. The former Marxist revolutionary led a Sandinista government in the 1980s which fought a Washington-sponsored insurgency. The prospect of this cold war foe returning to office has alarmed the Bush administration. Its ambassador to Managua has warned Nicaraguans not to vote for Mr Ortega.

Nicaragua, one of the poorest countries in the western hemisphere, has struggled to import enough fuel and experiences regular power cuts.

Under the deal, struck in April, Nicaragua’s association of municipalities – as opposed to the central government – agreed to pay 60% of the cost and pay the remainder over 25 years at 1%, in hard currency, grain or beans. A tanker with a separate shipment of 84,000 gallons reached the Nicaraguan port of El Rama at the weekend. It was welcomed by Mr Ortega, who said it was the same port to which Fidel Castro sent aid to the Sandinistas in the 1980s.

Originally the oil was to be distributed to Sandinista-run towns and municipalities but now it will go first to regional power plants.

Whether this will swing the election to Ortega remains to be seen. He was already leading in polls before this move, and it probably won’t hurt his chances any!

And in any case, I’m sure Nicaraguans are relieved to be seeing an end to the blackouts and brownouts.

This entry was posted in Barreling Right Along, Huguito Chavecito. Bookmark the permalink.