Oh, what a tangled web they weave…

…when building fences to keep out the very people they’re panting to employ for substandard wages!

A fence-building company in Southern California agrees to pay nearly $5 million in fines for hiring illegal immigrants. Two executives from the company may also serve jail time. The Golden State Fence Company’s work includes some of the border fence between San Diego and Mexico.

After an immigration check in 1999 found undocumented workers on its payroll, Golden State promised to clean house. But when followup checks were made in 2004 and 2005, some of those same illegal workers were still on the job. In fact, U-S Attorney Carol Lam says as many as a third of the company’s 750 workers may have been in the country illegally.

Golden State Fence built millions of dollars’ worth of fencing around homes, offices, and military bases. Its president and one of its Southern California managers will pay fines totaling $300,000. The government is also recommending jail time for Melvin Kay and Michael McLaughlin, probably about six months.

It is exceptionally rare for those who employ illegal immigrants to face any kind of criminal prosecution, let alone jail time. Earlier this week, for example, immigration raids on six meat-packing plants netted almost 1,300 suspected illegal workers. But no charges were leveled against the company that runs the plants: Swift.

Oh, the irony. The delicious, delectable irony. Just jumped right up and bit them in the ass, it did…

Actually, this all proves not the need for a “guest worker program”, but the bottomless greed of Corporate America, which wants only to go on paying substandard wages–and is quite willing to exploit vulnerable, undocumented immigrants in order to do so. They don’t need a legalized way to exploit those people; they need a swift kick in the pocketbook.

And for anyone who thinks fencing off the border is a viable solution, just ask Subcomandante Marcos how well that works: 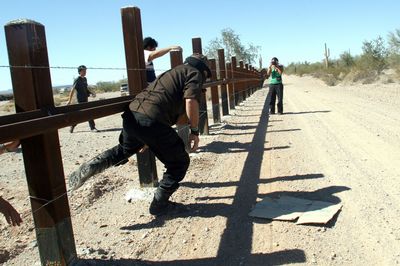 Let’s face it–for every barrier one person builds, another will find a way through, around, over or under it.

And sometimes, the builder and the one who worms his way through are one and the same.

This entry was posted in Isn't That Illegal?, Mexican Standoffs, The "Well, DUH!" Files, The Hardcore Stupid, W is for Weak (and Stupid). Bookmark the permalink.