Cup of fresh-brewed bile, anyone? Here’s who I’m serving it to this week…1. Silvio Fucking Berlusconi. Careful of the linky, kiddies; it has a nude shot of an ugly old fascist with a comb-over, a bad facelift, a sunken chest, a droopy belly and a VERY SMALL PENIS. It also lays bare the side of him the media normally prefers to hide, namely his evil, evil soul. Which of those is worse, I honestly can’t say. Both make me want to take up the fine art of projectile vomiting really, really soon, though.2. and 3. Lincoln Fucking Diaz-Balart and Ileana Fucking Ros-Lehtinen. How many times have these two congresscruds been re-elected in their respective Florida districts? Her bio says she’s been squatting in the House of Representatives since 1989; his, since 1993. Do the math, kiddies; how many terms does that make, respectively? Easily way more than two apiece, given that congressional terms in the US are two years long. And what have they done with the power the sheeple of Florida have vested in them in all that time? Basically, not much besides bitch about Fidel Castro and, in the case of Ileana, call openly for his assassination. And oh yeah, if you clicky that first linky, you’ll see them meddling in the latest Venezuelan referendum, which is really none of their fucking business. 4. And while we’re on the subject of US representatives who were inexplicably re-elected despite having done nothing but make asses of themselves, get a load of Michelle Fucking Bachmann. I didn’t realize there were that many sheeple in Minnesota, but apparently they have them too. My deepest condolences to the people of Minnesota who did not vote for this dumbass. Bet you’re wishing for congressional term limits too right about now, eh?5. Allen Fucking Stanford. On second thought, the Earth shouldn’t open up and swallow this scummy sumbitch just yet. First, let the Mexican drug cartels get their pound of his flesh; after all, he stands accused of laundering their money. I’m sure they’re not happy that he absconded with it. Whatever they leave of him, the US federales (including the IRS) are welcome to…assuming they can find him. And assuming the Venezuelan authorities don’t pick his bones clean first. They’ve become mighty intolerant of that kind of shenanigans down there of late.6. Sean Fucking Hannity. For buzzing up Allen Fucking Stanford on his shitty radio show. How ironic is it that this racist swinebag might just finally be strangled with the entrails of a multinational rip-off artist he was paid to plug, instead of his Nazified pal Hal Turner? Oh well, Karma’s a bitch, and she can have her way with him any which way she likes. I just hope she leaves some for the vultures.7. Christopher Fucking Hitchens. Look, I’m as antifascist as it gets, and I’m all for sticking it to the Nazis wherever they are and whatever form they take. But I prefer that it be done in a way that accomplishes something more than a moment’s petty individual snickering. And therefore, I must say that scrawling shit on one of their posters while drunk in Lebanon is not the act of a man who is “intellectually ambitious”, it’s just really fucking stupid. It’s also totally fucking typical of Hitch, who apparently didn’t learn much from having been waterboarded. Dude, use your head and stop trying to get it kicked in–you’re too old, too out of shape, and too drinky to pass for a street-fighting hero anymore. (Plus, you’d look shitty with a green mohawk and cherry Docs.)8. Sean Fucking Delonas. Cartooning Barack Obama as a crazed chimp, in a country with a long and not-so-proud history of whites referring to blacks as (among other things) “porch monkeys” and “yard apes”? That’s worse than tasteless, that’s racist. But then again, it’s par for the course; Delonas’s other cartoons reveal that hate, bigotry and the lowest common denominator are the key elements of his unfunny “humor”. He’s so crappy that political cartoonist/master blogger Daryl Cagle won’t list him on his site. If not for the appallingly far-right New York Post and its touching habit of defending the indefensible, he’d be unemployed. Ain’t wingnut welfare grand? 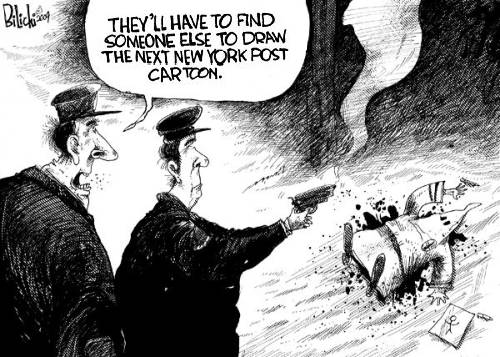 9. Jamie Fucking Dimon. He got bailed out along with Chase Bank, but he thinks people with mortgages should keep paying “even if they’re underwater”. If that’s his attitude, he should do two things: Give back every cent of his bailout cash, and keep paying what he owed before the bailout. Even if he’s underwater. Which I hope is exactly where he finds himself–in cement overshoes. 10. Joshua Fucking Partlow. Because repackaging old, debunked conspiracy theories, which were retracted and apologized for over a year ago, isn’t reporting. Unless, of course, you work for the Washington Fucking Post, which has apparently felt a thirty-year need to overcompensate for inadvertently bringing down Richard Fucking Nixon, instead of sticking with the official story about those right-wing Cuban émigré dudes at the Watergate just being “plumbers” and all. 11. Wilmer Fucking Azuaje. First this crazy Cro-Mag accuses the Family Chavecito of all kinds of crooked dealings in their home state of Barinas, Venezuela (including large land accumulations, all so far unproven); then, he busts into a local newspaper office with a bunch of armed thugs, hellbent on destruction, because he doesn’t like the way the paper covered the death of his brother (who was shot on Thursday in what looks to be a common street brawl; authorities now have one suspect in custody). And the best part? He blames it on Chavecito, of course! What’s his real problem? Whatever it is, I think it’s past time that he were locked up for it. Mentally unstable people should not be in parliament. 12. Richard Fucking Perle. First he authors neo-con foreign policy, now he denies that it exists and that he even read it. But his signature is on it, and he is KNOWN to be an author. Where have we heard his kind of denials before? Hint: They wore swastikas there. And it was funnier on this show:BTW, if you want to read even more fun and damning stuff about Perle, I highly recommend Richard Rhodes’s powerful work on the nuclear arms race, Arsenals of Folly. Perle, it turns out, was also a leading policy-pusher for the nuclear wing of the Military-Industrial Complex so rightly damned by Ike Eisenhower. There are so many reasons the Earth should open up and swallow this bastard that it truly buggers belief.13. Andres Fucking Oppenheimer. Oh joy, the Miami Herald’s resident narcissist-lemonist is all sour-pussed about Chavecito’s clear victory. Even worse, some people take the Schloppenheimer’s work for stockmarket gospel. One word, people: DON’T. He’s never been right about anything to do with LatAm yet, and he’s not about to start. The same kind of people who would believe him probably also lost money to Allen Stanford’s Ponzi-“bank”. 14. Allan Fucking Brewer Carias. This is the same creepy creature (from the Black Lagoon?) who dissolved all the democratic institutions in Venezuela during the coup of ’02; see him in action here. Why the hell is he teaching law at Columbia University? Do they not value democracy or the rule of law there? I would ask why the NYFuckingT grants this vampire an interview as if he were a real, non-undead human being, but I already know the answer: They applauded that coup and called it democratic. Of course they love him!And that about wraps it up for this week’s bile-o-rama. Tune in next week, same bat channel…BTW, I heard a rumor that Barack Obama was in Ottawa this week. I must have blinked, because I missed it.

This entry was posted in Just Pissed Off. Bookmark the permalink.

2 Responses to Dear Mother Earth, please open up and swallow these people NOW.