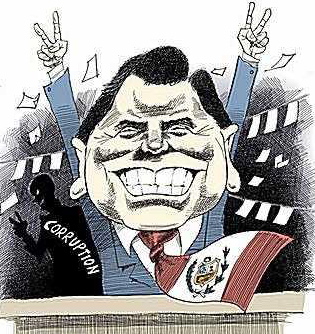 All right, so the government of Peru granted political asylum to an obvious crook on the flimsiest grounds ever. Now, they’re about to reap the consequences of their incredibly ill-considered actions:

The Venezuelan government, in an official communiqué, rejected the asylum granted by the Peruvian government to the fugitive from Venezuelan justice, Manuel Rosales. According to the communiqué, “the Government of Peru decided to grant political asylum to Manuel Rosales, in a decision which constitutes a mockery of international law, a severe blow to the fight against corruption, and an attack against the people of Venezuela.”

Previously, the Chancellor of Peru, José Antonio García Belaunde, informed that his government had decided to grant political asylum to Rosales, in spite of the latter having been accused of corruption, and who fled the country without facing the charges against him. “The Peruvian government, true to its historical tradition and in co-operation with international law, has decided to grant asylum to the citizen Manuel Rosales,” said the chancellor during a meeting with the exterior-relations commission of the Peruvian congress.Rosales met with other Venezuelan fugitives who fled the country over non-political offences and who received asylum in Peru, among them the leader of the illegal oil lockout of 2002-3 Carlos Ortega, and the ex-governor of Yaracuy, Eduardo Lapi. Lima also granted asylum in 2003 to two retired military leaders who participated in opposition protests in the Plaza Francia in Altamira, Caracas. Some press accounts claim that Nixon Moreno, ex-student leader accused of sexually assaulting a police officer and attempted murder of another officer, may also be in Peru.The communiqué released today by the Venezuelan government states:“As is well known to public opinion, the judicial authorities of the Bolivarian Republic of Venezuela sought, via regular channels, an international order for the capture of the Venezuelan fugitive from justice, Manuel Rosales, accused of corruption and illicit self-enrichment, which led to an immediate ‘code red’ alert from Interpol.“Interpol Peru asked Venezuelan authorities for the necessary documentation to detain Manuel Rosales; the documentation was handed over last Sunday, April 26.“In spite of the weight of evidence [against Rosales], the Government of Peru decided to grant political asylum to Rosales, in a decision which constitutes a mockery of international law, a severe blow to the fight against corruption, and an attack against the people of Venezuela. “In light of these facts, the Government of the Bolivarian Republic of Venezuela has decided, in protest, to immediately return to Caracas its ambassador in Lima, to suspend of all diplomatic proceedings of the ambassador to Peru, and to re-evaluate its relations with the government of that country.”

Translation mine.Translated from the officialese, that’s a major bitch-slap to El Gordo. Which should come as no surprise, given that he’s been a major bitch. While unpopular even with his own people, though, he’s still in office, and still thumbing his nose at international law on numerous fronts. Sheltering Venezuelan corruptos, as we can see, is something of a hobby for him.But at least now, he knows his chronic nose-thumbing isn’t going to get him any sympathy in Caracas. Most likely, not in the rest of the Unasur countries, either.