Portrait of the Terrorist as a Young Gun Nut 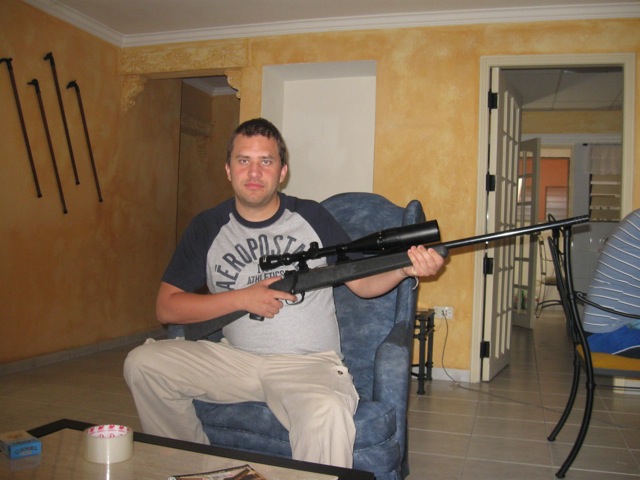 Elöd Tóasó, Hungarian/Romanian would-be assassin, posing with a sniper rifle last December at the Hotel Buganvillas, Santa Cruz, Bolivia. Too bad it didn’t have a magnifying mirror instead of a high-res telescopic sight, so he could take a peek in and realize how stupid he looked.Strap yourselves in and fold up your tray tables, folks. It’s time for another bumpy ride on Air Terrorcell!

Elöd Tóasó, the 29-year-old Hungarian-Romanian apprehended in an antiterror operation on April 16 in Santa Cruz, was the “communications link” of the international mercenary terror cell dismantled by the police, and was tasked with spying and telephone tapping.

In reality, far from being a “young adventurer” in search of a daily living, as described with paternal innocence by the Hungarian ambassador in La Paz, Matyas Józsa, Tóasó received military training in Bucharest, along with the Irishman, Michael Dwyer, who was killed in a hotel in Santa Cruz in a firefight with Bolivian police two weeks ago.Tóasó, who appears in a photo published by the independent Cochabamba newspaper Opinión holding a sniper rifle with a high-precision telescopic sight, became a mercenary under the influence of Michael Dwyer and also that of the Hungaro-Croatian Bolivian Eduardo Rózsa Flores, leader of the mercenary cell.The picture was taken in the middle of last December in the Hotel Buganvillas, one of the most exclusive in Santa Cruz, where the armed group stayed for more than two months at cost to a third party, currently unknown, whom Rózsa Flores described in an interview in Budapest last September as “the Bolivian financiers” and providers of the weapons.According to the management of the five-star hotel, the terrorist group booked in the Buganvillas under false identities. Tóasó, who was taken captive in the raid two weeks ago along with Jorge Tadik, a Bolivian ex-military man trained in Bolivia but with Hungarian roots, even convinced the ambassador of his own country that he was just an innocent adventurer, in spite of the evidence shown by a video of the conspirators making assassination plans.“This man, to me, is far from being a terrorist. Young, 29 years old, who made mistakes, and I believe they invited him to come here offering to pay him this and that, but he didn’t know what lay in store…I believe that this man had no money, because the financial crisis has hit Hungary hard too. We’re very badly off, so this stems from the fact that our people have no money. He was young, and looking for adventure, and accepted something I don’t think he thought through,” said the Hungarian diplomat, trying to intervene on behalf of his countryman.In Hungary, Tóasó was known to have belonged to the so-called “Szeklers”, who consider themselves to be direct descendants of pure Hungarians, according to Opinión. Along with Arpad Magyarosi, Tóasó joined the far-right paramilitary “Szekler Legion”, which went to war in Croatia for separatist causes in the 1990s.

Translation mine. Linkage added. Yeah, just another cute young dreamer, like that Irish dude, who supposedly got in over his head and couldn’t possibly have been a baddie. Looks to me like he damn well knew what he was doing, and didn’t care as long as the rich “Bolivian financier” supplied plenty of money, guns and ammo. (And BMWs, as Mike Dwyer bragged to his friends back home. Which, incidentally, do NOT come cheap in Bolivia, even if you’re only renting. Sorry, Mike’s friends, your ol’ buddy was definitely mobbed up.)The open question remains as to who that “financier” was, but my spidey-sense tells me Branko Marinkovic has got to be feeling the noose closing in on him by now. The government of Bolivia has sent troops to guard the Brazilian and Paraguayan borders of Santa Cruz, since it’s known that the weaponry and Jorge Rózsa Flores both got in through Puerto Suárez, on the border with Brazil. If I were in that gummint, I’d make sure that Branko had no means of leaving the country, lest he pull a Burusas and seek “political asylum” in Peru, too.PS: For another portrait of a deranged Hungarian from the inside of his cracked skull, I recommend this piece in the Irish Times. Fancy a racist fascist calling Evo, who has never said one prejudiced word against whites, a Nazi! Pot, say hi to kettle over there in the funhouse mirror…PPS: Andras Kepes, look for a subpoena from the Bolivian government in your mail this week. They’re not impressed with you for interviewing that Flores crackpot and then sitting on it instead of informing the authorities of a terror plan. That makes you look kind of complicit in it, dude.PPPS: A German-language blogger in Ireland is asking the same questions in his blog as Otto, BoRev and I are tackling, respectively, in ours. He’s also found the “actual” website of the Szekler Legion to be “under construction”, although it wasn’t last week. Go to his link if you wanna see screenshots of the icky place before it was taken down for “construction”.PPPPS: And finally, don’t worry–these Szekler whackjobs aren’t the scariest Hungarians out there by a long shot. Click here to see who is.