“Must smash that pesky insect! Why does he taunt me so?”Well, Mario–maybe it’s because he’s a popular, elected leader, while you’re a sad, old, sold-out fart with no new ideas of his own, who lost his own election bid rather badly for that and other reasons. Kiddies, this is what the bitter old guy came to Venezuela for. Basically, to preach the same old racist-putschist-capitalist gospel that he thinks should pay off far more handsomely than it actually does:

Hundreds of right-wing political leaders and representatives of pro-capitalist think tanks from across the world gathered in Venezuela’s luxurious Caracas Palace Hotel this week for an exclusive event titled “International Conference for Freedom and Democracy: The Latin American Challenge.”

A major theme of the conference was how to put an end to the political changes been carried out by President Hugo Chávez and a wave of other progressive presidents who have been elected across the region over the past ten years.Peruvian author and former Peruvian presidential candidate Mario Vargas Llosa, one of the high profile keynote speakers at the event, framed the Chávez government as the chief obstacle to the progress of capitalist free markets in the region. “The path of progress is not the path of collectivism, it is not the path of state-ism, it is not the path of social property,” said Vargas Llosa, referring to new forms of social property that the Chávez government has promoted to co-exist with private property, which remains protected by the Venezuelan Constitution. “Property is individual and private or it is not property,” said the author.

Gee, that’s about as original as an old, worn-out cookie cutter. Hey Mario, ever hear of public schools? Public hospitals? Public roads? For that matter, how about the public airport at Maiquetía, by which you arrived in the country whose leader you came to insult? All of those and more are property–and they’re not individual OR private!

Vargas proceeded to encourage the wealthy and powerful conference attendees to impede the Chávez administration’s progressive policies, which have been approved by a decisive majority of Venezuelans in more than a dozen democratic elections. “If this path is not interrupted, Venezuela will be converted into the second Cuba of Latin America,” said Vargas Llosa. “We should not permit it. That is why we are here.”

This is hilarious, coming from a man who once ardently supported and defended Fidel Castro, back before the plagues ate his brain. Kiddies, allow me to present and translate for you the words of one Mario Vargas Llosa, back in the day: 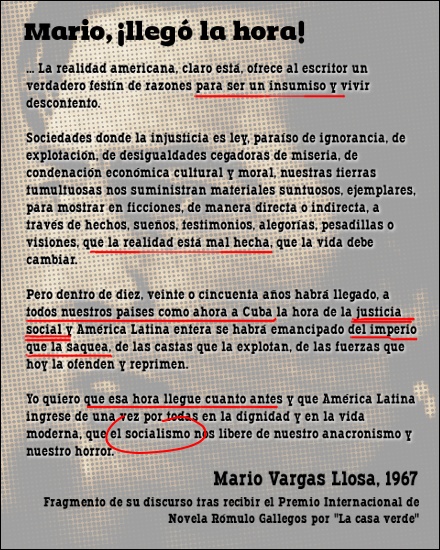 That was his 1967 speech upon receiving the Rómulo Gallegos prize for his novel, The Green House. Here’s what it says, in my own translation:

The American reality, clearly, offers the writer a veritable banquet of reasons to be a conscientious objector and live in discontent.

Societies where injustice is law, a paradise of ignorance, of exploitation, of inequalities that blind one with misery, of economic, cultural and moral condemnation, our tumultuous lands submit to us sumptuous materials, examples, to show in fiction, in a manner direct or indirect, after facts, dreams, testimonies, allegories, nightmares, or visions, that reality is badly made, that life must change.But in ten, twenty or fifty years, the time for social justice will have come for all our countries, as it has for Cuba today, and a united Latin America will have emancipated itself from the empire that robs it, the classes who exploit it, and the forces that today offend and oppress it.I hope that this hour arrives as soon as possible, and that Latin America enters, once and for all, into dignity and modern life, and that socialism will free us from our anachronism and our horror.

Emphasis as in the original.Gee, Mario, what the hell happened? You’ve gone from being an ardent, pan-Latin-American socialist, to being a neoconservative imperialist–living in Spain, no less! But I suppose you don’t remember having said that. After all, it was more than 40 years ago, and a lot of things have happened since then. No doubt you took one look at what happened to Chile and Argentina a few years later, not to mention Bolivia that same year, and decided that maybe this whole rebellious, dignified socialism thing wasn’t such a good idea after all. It’s not hard to see why; the iron heel of fascism was a pretty good persuader that maybe capitalism was the way to go after all–eh, Mario?Of course, there are other great writers, your contemporaries, who haven’t given up on socialism. Eduardo Galeano, who lived in Argentina after fascists had driven him out of his native Uruguay (and just before the junta took over there in 1976), was menaced frequently at his office by the Argentine Anticommunist Alliance. They threatened him with death. His response? “The schedule for calling in threats, Sir, is from six to eight!” He wrote this incident up in his book, Days and Nights of Love and War. It was originally published in Cuba. He, too, is an award-winner. He also has not stopped being a socialist; he’s a great observer of Chavecito’s Venezuela, and these days, I daresay, his oeuvre is more keenly appreciated there than your old stuff is. (Have you read it, Mario? Does it shame you? Or did you quit touching things with Cuban germs on them before that amazing book came out?)It would certainly give pause to me, Mario, if I were like you–an old sell-out. Fortunately, I’m not there yet; if I’m lucky and if I keep my head, I never will be. I can’t help thinking of what Che Guevara once wrote in a letter to his mother: “Not only am I not moderate now, I shall try never to be. And if I ever detect in myself that the sacred flame has given way to a timid votive flicker, the least I can then do is vomit over my own shit.”But like I said, I’m not there yet. I’ll have to vomit over other people’s shit instead. Yours, Mario, will have to suffice.