Wankers of the Week: The “pro-life” killers of Dr. Tiller 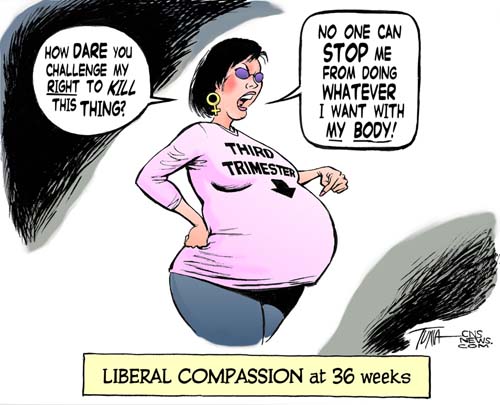 No shit, kiddies, this is how they really “think”. And this is how they see women. Nice, innit? Christ, what is it about abortion that brings out the wankers, baying for blood from women and doctors? Whatever it is, they were sure out in force this week, and their ugly side wasn’t far below the surface. In many cases, it was right out front and proud. Just like a wanker’s you-know-what. Here’s who gets bitch-slapped for public obscenity by your Auntie Bina this week, kiddies…1. Bill Fucking O’Reilly. For demonizing Dr. George Tiller, an abortion provider from Kansas who was recently murdered. IN CHURCH, no less. Of course, he’s pretending he had nothing to do with it. What does one expect from a cowardly wanker like Mr. Oh-Really, or any other of his bed-wetting, loofah-abusing, woman-harassing, shit-stained ilk? They’ll never man up and admit their share of responsibility, as Frank Schaeffer has done, for the general psychopathy of the right-wing fringe.1 1/2. Juan Fucking Williams. Uncle Tom covers Billo’s blotchy bully ass. Talk about compounding one’s moral cowardice.2. Randall Fucking Terry. See above, and add shameless mooching. Cthulhu will surely eat HIM hot and crispy one day…soon, I hope and pray. (Hey, it’s commensurate to the crime. Just as he says.) 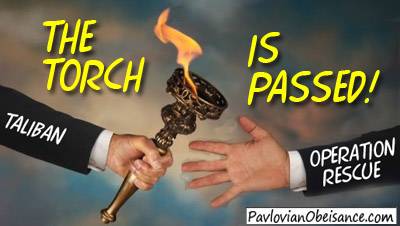 3. Scott Fucking Roeder. Yeah, I know–why is the stinking assassin third on the list? Because he didn’t come by his murderous attitude just out of thin air. See the two (and a half) entries above. And add extra wanker points for his fascist militia membership. His ex-wife even confirms that his extremism was part of the reason she ended up divorcing him, and that it’s also why his son, now 22, has as little as possible to do with his dad. Nice guy all around, eh? 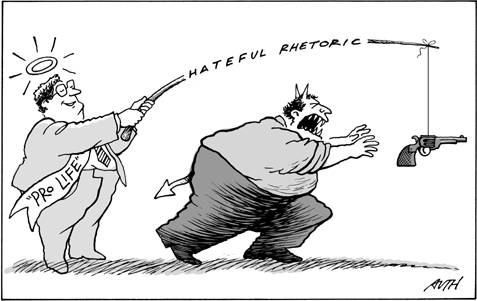 4. All the fucking Twitter-shitters, freepers, etc., etc. ad nauseam who are applauding this crime. Are they nuts? YES. And they’re also quite typical of the anti-abortion movement, no matter what anyone says. They deeply believe that all women who have sex are jezebels who must be punished for it–with pregnancy, among other things. And if a woman chooses not to stay pregnant (i.e. punished for sex), they scream for blood. Hers? Her doctor’s? It hardly matters to these thugs, as long as someone is killed to atone for the act. “Pro-life” is a misnomer for these people; they clearly have no problem with the murder of medical professionals. Especially if those medical professionals also happen to deliver babies, not just abortions. And, more significantly, if they also practice adoption, as Dr. Tiller did. They also can’t admit that Dr. Tiller did what he did out of a deep compassion for women in a serious bind. Are you people ashamed of yourselves yet? You should be. You’re not pro-life, but the man you love to hate was. And now he’s dead–thanks in no small part to all of you fascist WANKERS. 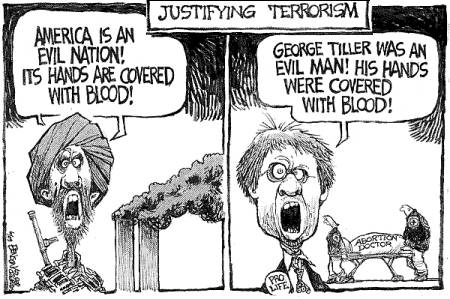 5. Whoever the fuck is responsible for this defamatory website. You’ve got wanker written all over you. Why don’t you put your OWN name to it, you cowardly asshole? (EDIT: According to an anonymous benefactor commenting below, Wanker #5 is Stuart Bensch, of 1007 W Padon Avenue, Blackwell, Oklahoma 74631. Please direct all correspondence accordingly.)6. Fucking Google. When I did a search for the phrase “George Tiller delivered babies”, just to see if in fact he did (as many abortion providers do, surprise), the search left the crucial word, “delivered”, out. WTF does Google have against people seeking complete, accurate information on an ob-gyn? Try it yourself and see–it WILL leave the “delivered” out unless you re-run the search asking it to leave it in! And even then, good luck finding non-Christofascist stuff. A right-wing-biased search engine? Don’t look so shocked, kids. The world is full of right-wing bias, and it is the root of all evil. I already suspected something seriously amiss from what pops up in my “Hugo Chavez” Google Alerts. “Don’t be evil” is apparently just an empty slogan to these wanks. 7. Anyone who refers to late-term abortion by the inaccurate term “partial birth”. There is no such procedure, except in the fevered brains of the Amurrican Taliban. The overwhelming majority of “late-term” abortions are second-trimester, and are done only in the case of a fetus that isn’t viable anyway. There is NO “partial birth” about it, and NO sense pretending that there is. Read this and get the facts!8. Anyone who thinks that it will “save babies” to kill a doctor for Jeebus. No, it won’t. Women who are going to abort, are going to go to any length they have to, even if it kills them. And if you don’t believe me, maybe you should read what Dr. Garson Romalis has to say about his own near-death experience at the hands of one such walking freak-scene. It left him unable to deliver babies, which he did on a regular basis, as well as providing abortions, BEFORE he was shot! (Thanks a lot, James Charles Fucking Kopp. Why do you hate babies, James Charles?)9. Anyone who thinks that abortion is a “holocaust” and that it’s the sort of thing a Nazi would do. WRONG. The Nazis were against abortion. They were also most explicit in their “KKK” rule for women. This coincides remarkably with the Religious Reich’s own role-modeling for females. They not only rewarded “good” German mothers-of-many with crosses, they actually forbade women to refuse to have children! And let me repeat, this rat-eaten assassin-of-doctors, like many others, was a fundie who moved in some pretty Nazified circles. So, if you’re “pro-life” for religious reasons–congratulations! You have something major in common with fascists:

The Nazi Mother’s Cross–the ultimate symbol of “pro-life” Christianity!10. Bruce Fucking Murch. Figures that a Quiverfull cultist would celebrate something as heinous as this. They care precious little about the women, and much more about keeping ’em barefoot and you-know-what, in the name of raising an army for Jesus, and for fighting the so-called culture war. For some reason, this whole whacked-up theology has a funny way of backfiring on itself and breeding radical feminists instead. Gee, I wonder why!And finally, anyone who thinks this CRIME will put an end to abortions anywhere. No, it won’t. It won’t even shutter one clinic! After a period of mourning, Dr. Tiller’s clinic will be open next Monday…and practicing good medicine, providing a needed service to women in a bind. Meanwhile, your “hero” Roeder will be rotting in jail, and this time, he won’t be getting out on any technicality. The law is clear–this is NOT justifiable homicide. This is first-degree MURDER, by definition–because there was malice aforethought. This is a legal definition which applies to all doctor-killings, but NOT to abortions. (When’s the last time YOU saw a woman have an abortion simply to torture her own fetus? Oh, only about NEVER. Abortion is, therefore, not murder–QED.)

And no, I don’t need you wanking in my comments section here. None of your comments will be published, and anyone who tries it will be insta-banned (and your e-mail will be saved to be forwarded to the appropriate authorities if you threaten me in any way). Your hate speech stops here, bastards. Now go and get a life.

This entry was posted in Do As I Say..., Fascism Without Swastikas, Guns, Guns, Guns, If You REALLY Care, Isn't That Illegal?, Law-Law Land, Newspeak is Nospeak, Not So Compassionate Conservatism, Pissing Jesus Off, Sick Frickin' Bastards, The Hardcore Stupid, Uppity Wimmin, Wankers of the Week. Bookmark the permalink.

20 Responses to Wankers of the Week: The “pro-life” killers of Dr. Tiller