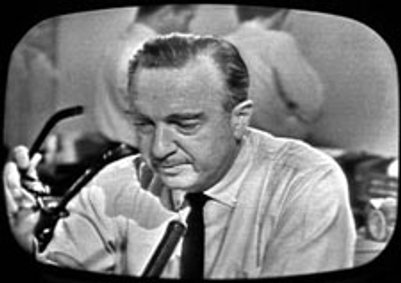 Walter Cronkite announcing the death of JFK. I take off my glasses to you, sir.A venerable man passed away this week at a venerable age. His name was Walter Cronkite, and he was 92 years old.Some called him a “Voice of God”–which, for all its reverential implication, simply means a male news reader with a voice that sounds authoritative even when reading off a grocery list. (Canadian actor Lorne Greene–Bonanza‘s beloved “Pa Cartwright”–was also known as such during World War II, when he worked as a radio announcer for the CBC.) Walter Cronkite was more than that. When he spoke, he didn’t only sound authoritative–he was it. People knew when the war in Vietnam was well and truly lost for the US–it was so because Walter Cronkite took a good hard look at it and declared it unwinnable. His judgment was sound, based not only on casualty reports (the Vietnamese had several times more casualties than their enemy, but that didn’t stop them) but on the fact that the US troops knew they were fighting an immoral war based on a lie. Cronkite had the guts to tell that exactly as it was.Interestingly, he was also right about another war, although this is less well known. (I didn’t find out about it till today.) Did you know that he also “called” the War on Drugs? It’s true. Unfortunately, his prescience has not shaped public policy nearly as much as it has mirrored public opinion. This failed war still rages, with ugly implications for, among other places, South America. And yes, plenty of lies are being uttered in the service of it. All of them come from lesser journalists.Interestingly, for a “Voice of God”, Walter Cronkite never pretended an impartiality he didn’t feel. When John F. Kennedy was killed, Cronkite took off his horn-rims and blinked in pained disbelief, clearly fighting tears. He was not afraid to show emotion, be it grief or–when the Apollo 11 lunar mission took off–jubilation. He felt no obligation to come off as a cypher in the interests of that bogus journalistic ideal, “objectivity”. This, too, underscored his authority–it let the audience know it was getting the real deal. When he said “And that’s they way it was…”, you knew he meant it. The man was avuncular, but he was not bland.I miss Walter Cronkite terribly. He slowly slid out of the spotlight before I took a serious interest in journalism, and that’s too bad. We need more like him today. Unfortunately, the best we had was Dan Rather, and he soiled himself shamefully after 9-11. Would Walter Cronkite have choked like that? Most assuredly not. I like to think he would have followed the truth wherever it led, whomever it inconvenienced and whatever nefarious, costly agenda it would have hurt. Walter Cronkite was no liar, no sellout, no crapaganda whore. He was a journalist’s journalist, and while there were precious few of them in his time, there are even fewer of them today.How I miss him. Oh, how I miss him!

This entry was posted in Obits and 'bobs. Bookmark the permalink.

1 Response to A few random thoughts on Walter Cronkite