Another innocent woman killed by sexism and sleaze

The word “ladykiller” has taken on a very literal meaning: 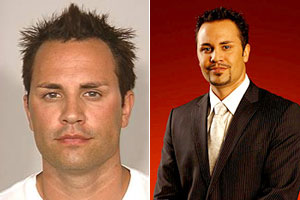 A former Calgarian being sought by California police in the death of a model pleaded guilty to assault in his hometown three years ago.

Police in Buena Park, a city southeast of Los Angeles, are looking for Ryan Jenkins, 32, as a “person of interest” in the death of Jasmine Fiore, 28.A man looking for recyclable materials in a metal trash bin found Fiore’s naked body in a suitcase on Saturday morning. Police said she appears to have been strangled.Fiore’s mother, Lisa Lepore, said the couple got married in Las Vegas in March but got the union annulled in May. She said Jenkins convinced Fiore to take him back.Jenkins reported Fiore missing to the Buena Park Police Department on Saturday evening. Police said she was last seen with Jenkins in San Diego on Friday.Lt. Gary Worrall said investigators have not been able to contact Jenkins, and they fear he may be headed back to Canada before they can question him.“We find it suspicious that with all the media coverage that he has not made himself available to us,” he said.

Suspicious? Yeah, I should say so. If he were innocent, he’d have nothing to hide. Instead, his ex-wife’s body was found hidden in a trash dumpster, and Ryan himself is in hiding God knows where. Plus, there are a lot of hinky details, like a nasty text message he is believed to have sent to Jasmine’s former boyfriend, whom she had a date with the night she vanished. Somehow, I just can’t believe he’s innocent of anything.BTW, here’s the late Jasmine Fiore, Ryan’s ex:

Jasmine Fiore must have been the sweetest person on Earth, and I don’t doubt that she was, but it’s hard to see the humanity when you’re looking at someone in a profession that objectifies women quite literally, turning them into props rather than people. (Especially if the one looking is a certain type of male.) It may not have been her idea to look like that, but someone probably told her she’d get more modelling jobs if she did; she was in a very conformist industry, where women are often interchangeable as far as their looks go. She didn’t deserve to die, but that look, that artifice, must have made it all too easy for someone to think that she was just a doll to play with and then cast aside. It’s a look that a certain type of guy gravitates to. A certain type of guy you wouldn’t normally take home to meet your parents no matter how rich and prominent he appears to be. In fact, a certain type of guy that most women rightly avoid taking home anyway, not to meet their parents but for whatever reason…because he’s one of those:

According to court records in Calgary, Jenkins pleaded guilty to assault in 2006. There are reports the victim was his girlfriend at the time. Jenkins was given a conditional discharge which he fulfilled with 15 months of probation and court-ordered counselling.

Aha, so Ryan has a record. It figures; men who kill women have a prior history of violence. None of them ever do it just out of the blue. It also appears that his court-ordered counselling didn’t “take”. Too bad. If it had, he wouldn’t have gotten all these grandiose notions:

Jenkins moved from Calgary to Los Angeles to appear as a contestant on a reality TV show called Megan Wants a Millionaire.

The show features 17 wealthy men, each with a net worth of more than $1 million, competing for the affections of model named Megan Hauserman. It had aired three episodes by this week, and Jenkins had emerged as a fan favourite on the show’s online discussion boards.“The show completed production at the end of March. Given the unfortunate circumstances, VH1 has postponed any future airings,” said the network in a statement on Wednesday.“This is a tragic situation and our thoughts go out to the victim’s family.”In addition, VH1 pulled Jenkins’ biography and photo from the show’s website.Fiore’s mother said Jenkins had his eyes on stardom.“He had stars in his eyes,” Lepore said. “He was totally jazzed, like, being a star.”

I don’t wonder that this show was pulled. Not only that, but this creep was a contestant–and reportedly a winner–of another reality show as well, called I Love Money 3. He had a meteoric rise to wealth, piggybacking on the coattails of his dad, a pricey Calgary architect and condo developer. (He’s still apparently listed here, too, although he’s lost his licence. Hmmm.) That, and his apparent lust for fame (and multiple women) made him a “natural” for these grotesque shows. It’s the skanky “player” ethos writ large: get as many pretty girls as you can, and don’t let a little thing like their humanity and their rights stand in your way. You’re a rich guy, so of course you deserve it–women are just trophies anyway, right? Ugh.I don’t go in for “reality” shows, precisely because of that nauseous blend of vapidity and voyeurism; it’s the same thing that turns me off of porn. It’s not sexy. It’s sad. It’s like orchestrating a car wreck just so you can see the blood.And it’s saddest because of the effect it tends to have on people–an effect no one even seems to notice until it’s too late. That’s because the effect is deeply embedded in our society, and in our culture. It was this way long before any of these glorified game shows ever aired.Back in my early teens, there was a huge hoopla up here over the death of another beautiful, blond model who wasn’t exactly a fashion icon either, because her brand of modelling involved very little clothing, and wasn’t designed to sell anything but magazines. She was a Playboy centrefold girl named Dorothy Stratten. She, too, was killed by her estranged husband, who was a sleazeball to end them all. He was so sleazy that Hugh Hefner himself characterized him as “a hustler and a pimp”. Stratten got tired of her ex’s abuse, separated from him, and moved in with movie director Peter Bogdanovich, and that’s when her troubles spiralled out of control. Her ex, livid that he couldn’t have her anymore, decided that no one else would, either. After he shot her, he turned the gun on himself, probably to evade capture
and punishment. It was the ultimate objectification of a sweet girl who’d already become a sex object in record time. And yes, Dorothy’s ex, too, had a prior history of violence and abuse. Here’s an account by a former girlfriend, who is undoubtedly thankful she got away.Dorothy Stratten’s death was the subject of two hit songs, both written by Bryan Adams: “Cover Girl”, recorded by Vancouver rock group Prism, and “The Best Was Yet to Come”, by Adams himself. Here’s the latter, which I’ll dedicate to Jasmine Fiore:As with Dorothy, Jasmine Fiore is the human being who was lost and discarded amid all the phony glitz and self-serving sleaze. May the truth come to light, and may Jasmine get the justice she deserves. May her family find comfort and may they not grieve her loss alone. For they are not alone. All around the world, every day, women are being killed by men, never deserving it–except, of course, in the deranged minds of their killers, who were made that way by being told, somewhere, somehow, that it was okay to treat a woman as chattel. All the more so if she is pretty, as these two ladies were.No woman should be abused because of how she looks, and no woman–no matter what she does for a living–deserves to die in this way, objectified, degraded, then dumped in the trash. Let’s stop pampering that big fat male ego and demolish the social norms that make this sort of murder so sickeningly common. In other words: Let’s kill sexism so that sexism never kills again.

This entry was posted in Men Who Just Don't Get It, Sick Frickin' Bastards, The Nausea. Bookmark the permalink.

5 Responses to Another innocent woman killed by sexism and sleaze