Wankers of the Week: Fascists and Apologists edition

First, a little keynote address by the Reverend Keith Olbermann:

Big breath. Yes, kiddies, Auntie Bina has a big, bad, UGLY mad…and these people are it this week:1. and 2. Hal Fucking Turner and his (as yet unnamed) FBI paymaster(s). Why in hell would you pay someone to spout Nazism, racism and hate, hate, hate? In a word, ENTRAPMENT. I would sure love to see how many actual flies their sticky paper has caught. The current round of loonies cropping up at town-hall meetings with guns strapped to their legs tells me one thing for sure: They haven’t caught nearly enough. And I wouldn’t be surprised if they’ve actually created a few fresh ones where none existed before. Good luck catching them, FBI, you’re gonna need it.3. And while we’re on the subject of hate speech, all those freedom-of-screechers who defend hate speech as “free”, but don’t want to do a thing about it. Or its consequences. Other than defend it, that is. (I’m looking at you, Michael Fucking Orozco. BTW, you’re contradicting yourself when you say it was his job to get others acting out so the FBI could bust ’em, but at the same time, that he wasn’t telling them to take a gun and go shoot. Wha…?) You people, you free-speech absolutists, absolutely sicken me. When you defend the propagation of hate, you defend murder. How many lynchings do there have to be before you people wake up to the fact that hate speech is oppression, not freedom? Auntie Bina is German, you see, and a bad one, too, so she knows from family experience about these things and what they can lead to. 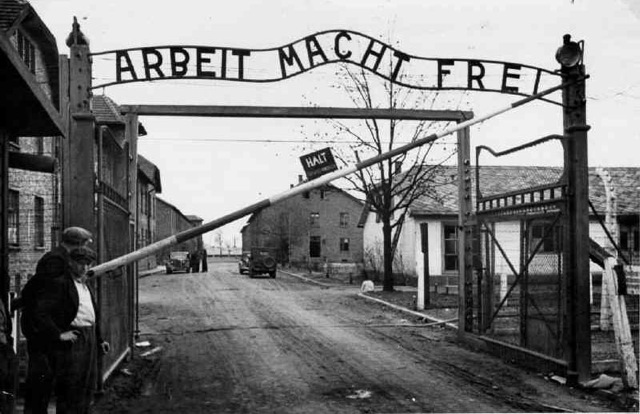 Weimar Germany had freedom of speech, too. Wonder what happened to it? One thing’s for sure: they never got it all the way back. Today, human rights trump the individual right to babble like an idiot, and that is as it should be. Now, if the government would only enforce the law properly (and the police would stop protecting the neo-Nazis!), there’d be no need for the anti-fa to do the job for them.

3 1/2. And yes, the ACLU is absolutely wrong on this issue, too–this week, any week. When will they learn that it’s worse than useless to go to bat for anyone who only ever plays foul? The neo-Nazis are forever biting the ACLU hand that just goes on feeding them. Kindness hasn’t killed that monster yet. Nice historical revisionism you got going there, too, ACLU. And would you kindly explain this to me? I thought you guys were about freedom. Why is it okay to be a Nazi in the US, but not a commie? Probably for the same reason it’s okay for the ACLU to get Weimar Germany’s well-known history of free-speech absolutism and weak commitment to democracy so terribly wrong. And why it’s also okay for the ACLU to go back on its noble tradition of free-speech-defending when its own members get too critical of, you guessed it, the ACLU.4. This crazy teabagger bitch right here:She yelled “Heil Hitler” at an Israeli Jew praising Israel’s national healthcare program. (Which, incidentally, is one of the few things Israel still has to be proud of.) Even more bizarre, she’s wearing an IDF t-shirt! Yes, folks, there’s now really such a thing as Jewish Nazis. And they have no idea how fucking cuckoo they are. (Someone please pass them a copy of Vonnegut’s Mother Night, wouldya? Or better still, remind them that free state healthcare also applies to the mental kind.)5. And while we’re on the subject of crazy teabagger bitches:Project much, Little Sister of Wanker #4? Fortunately, we’ve got Barney Frank to put you in your place. Well done, Barney.6. And speaking of projectors, how about Glenn Fucking Beck? Basically, this is Hal Fucking Turner with a high-visibility job and a slightly more weaselly way with words. He may be losing sponsorships, but that’s nothing; he’s still got his job. He, too, is an inciter, and worse, he’s got a vast national news network behind him. Firing’s too good for him, unless you’re talking about the squad kind. 7. Tom Fucking Ridge. “Just following orders” didn’t work at Nürnberg, either, Rainbow Ridge. You and Dick and Tater all need to take your lumps the way you did everything else: TOGETHER.

8. This blogging birther handjob right here. Newsflash: The more you love and support Sarah Fucking Palin, the more you’re wasting your fucking time. I don’t know why anyone would be supporting quitters who’ve done nothing but wasted public money, racked up ethics scandals, and spouted reams of fascist stupidity. And the more I see of blogs like yours, the more I’m glad I fired all popes of organized religion two decades ago. As I recall, Hitler and Mussolini were Catholics in a secular world, too…and threatened by it…and never, not even posthumously, excommunicated by the Vatican that still secretly loves them to this day.And, BTW, Nanook of the Nazis is not Catholic, she’s a fundie who’d burn you guys at the stake because you’re not the “right” kind of Christers, and she’d probably crucify Jesus all over again if he came back because, let’s face it, he’s a socialist. How much support can you waste? Gawd, how sad to be born without two working brain cells to rub together.9. and 10. The Fucking CIA and Fucking Blackwater. In bed together–what did you expect? The CIA has long been Corporate Amurrica’s enforcement arm in the world, and with the priv
atization of its functions by Blackwater (however inept), the snake has truly bitten its own tail. Most inadvertently revealing quote of the entire piece? Step right up, Jack Fucking Devine:

Jack Devine, a 32-year veteran of the CIA’s clandestine operations office, said Thursday that the government should be extremely cautious about outsourcing lethal and sensitive CIA operations–in part because those are important capabilities the spy agency should be developing in-house, but also because it looks bad if the operation becomes public.

“If it won’t pass the giggle test, you don’t want to be involved in it,” Devine said.

Yeah, why let the private sector go around covertly killing people for profit when the CIA can do it just as well for at least an equally big bite out of the public purse? I mean, what have they been doing since their inception, anyway? And they’ve been doing it for the private sector’s benefit, to boot. Why does the private sector hate Big Fucking Brother? Why does Big Fucking Brother hate himself? Buncha fucking ingrates.11. The Fucking Dissociated Press, yet again. Christ, five reporters on a story, and none of them managed to get out there and interview some oppressed Hondurans who miss having an elected president and a working democracy? No word on the rising death count from the roving death squads, either. But they DO think it worthwhile to regurgitate fascist drivel from Bolivia’s second-ugliest douchebag, Rubén Costas–to demonstrate that there was a (nonexistent) “legal precedent” for the coup, or perhaps to create one for a bunch of Bolivian putschists who currently have nada? One might start to get the impression that the AP is being an apologist for something…12. Betsy Fucking McCaughey. Who she? Oh, only the bitch who gave Sarah Fucking Palin that “death panel” meme in the first place. Seems she’s had a little conflict of interest between her pose as a neutral policy reseacher and her true nature, as a rabid right-wing shill for a drug company. From the relevant press release:

CANTEL MEDICAL CORP. (NYSE: CMN – News) announced that on August 20, 2009 it received a letter of resignation from Ms. Elizabeth McCaughey as a director of the Company. Ms. McCaughey, who had served as a director since 2005, stated that she was resigning to avoid any appearance of a conflict of interest during the national debate over healthcare reform.

Emphasis added.Yeah, I can kind of see a conflict there. I mean, it’s very easy for one to appear like a right-wing shill for the for-profit health sector when one IS one. She should have been made to resign BOTH positions. Instead, she’s still in the one where she will end up doing the most damage.And finally, to “Erin”, who expects an apology from me (ain’t gonna happen, because there’s nothing to apologize for): WHAT PLANET ARE YOU FROM, GIRL? If you don’t understand yet that what happened in Santa Cruz was the unravelling of a murder plot orchestrated by Branko and Co., do yourself a favor: Just shut the fuck up and read this blog first, THEN comment–when you have an INFORMED opinion. Till then, you’re nothing but a fascist apologist. And a damned sorry piece of racist human waste. (Figures your IP shows you’re at Regent University–the worst and most racist unaccredited brainwashing hole in the US of A!)And that’s it for this week. I’ll let Bart here have the final word, since he knows what freedom of speech really is, and how to use it correctly: 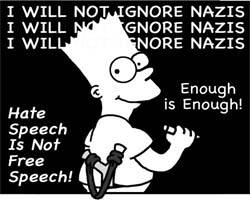 6 Responses to Wankers of the Week: Fascists and Apologists edition