Posted on September 7, 2009 by Sabina Becker 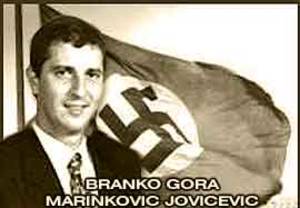 Hey Branko, is this “libel”, “slander” or “calumny” enough for ya? Dude, if the shoe fits, wear it and don’t send out your lawyer to complain that it pinches:

Branko Marinkovic, businessman and ex-president of the radical Comité Pro Santa Cruz, filed a slander lawsuit on Monday against the vice-minister for governmental co-ordination, Wilfredo Chávez, and a presumed activist for the ruling MAS party, professor Margoli Guzmán, accusing them of linking him to terrorist acts.

Marinkovic’s attorney, Otto Richter, told the media that this action would set a precedent, because no government authority or political leader had previously faced such accusations without knowing that they would have to answer for their actions and words before the law.“Today, Mr. Branko Marinkovic has filed two lawsuits, one against Ms. Margoli Guzmán Rojas, and the other against Mr. Wlfredo Chávez Serrano, for slander and injuries [to his reputation],” said the jurist.Richter explained that last Wednesday, vice-minister Chávez insinuated that Marinkovic used his influence against the Superior Court of Santa Cruz, with the objective of slowing down investigations into a separatist-terrorist case against the ex-civil society director.Margoli Guzman is said to have accused Marinkovic of financing the activities of the terrorist cell dismanteld in Santa Cruz this past April.Marinkovic’s attorney asserted that his client “is in Santa Cruz, will stay in Santa Cruz, and will remain in the country” to demonstrate before justice that he had never had any relations with the terrorist group.“He is not trying to evade any orders, for one simple reason: there is no arrest warrant out against Branko Marinkovic,” said Richter, who claims that justice failed because the terrorist-separatist court case is rooted in Santa Cruz, not in La Paz.

Translation mine.Here you can clearly see just how much arrogance and chutzpah exists in the Santa Cruz “civil society” groups (read: fascist terrorist financiers). They claim it’s not really justice because the case against them is a federal rather than a local or provincial one? Surely they jest.Or maybe they’re just running scared, because they know that the government has some real information on them. And to intimidate anyone who speaks out, they’re now pursuing this frivolous suit against two very minor players.Bad news for ya, Branko: The truth is the best defence legally as well as in any debate. These two will get off, because they’re only telling the truth, and it is nothing that we don’t already know. And if you don’t have the truth on your side, all the lawsuits in the world aren’t going to change that. At best, this is just gonna make you look like the rich bully you undoubtedly are.And if you don’t like seeing it told so baldly, you can sue me too–if you think your arm reaches all the way up the Internet into Canada. C’mon, Branko, let’s see if you can repossess my used furniture, haha.PS: Branko’s lawyer is lying, BTW. Government minister Alfredo Rada has just made it clear that a warrant for Branko’s arrest is in the works. The case against Branko is being made at the federal level because Branko (or his Comité, same diff) is widely suspected of having bribed a superior-court judge in Santa Cruz. So you can kind of see why the case against him can’t be carried out locally, eh?

This entry was posted in All About Evo, Fascism Without Swastikas, Filthy Stinking Rich, Isn't That Illegal?, Law-Law Land. Bookmark the permalink.