A big embarrassment for my home and native land 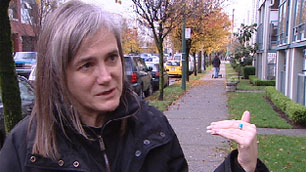 Amy Goodman talks to the CBC about her unexpected detention at the border. See Raw Story for video of the whole interview with CBC’s Kathy Tomlinson.I’m rarely ashamed to be a Canadian, but today is different. Today, one of my personal heroes and role models, Amy Goodman of Democracy Now!, was detained at the border. She was coming to British Columbia to speak out against war and promote her book, but that’s not how the uniformed stormtroopers saw it:

Goodman says Canadian Border Services Agency officials ultimately allowed her to enter Canada but returned her passport with a document demanding she leave the country within 48 hours.

See, this is the paranoia that goes with having a conservative government. Harpo & Co. are already under siege. The war in Afghanistan was never popular here, but Canadians being dutiful troop-supporters, the criticisms have all been very muted. Rather than do the really bold thing and declare NATO a relic of the Cold War past, Harpo has chosen to kiss ass and lick boots in Washington. And keep sending Canadians to die in a country that has been the downfall of every foreign power ever to invade it. (Alexander the Great is said to have died at Kandahar, which is supposedly named after him. Canadians are currently in the Kandahar province. Every so often one of them comes home in a box, and the region remains ungovernable. So, why are we there?)And the Olympics are a special point of paranoia. The actual risk of terrorism in Canada is almost nil, and the likelihood of anything disrupting the games is vanishingly small. It would have been absolutely zero if we were not at war in Afghanistan against a phantom menace that never menaced us before. When he made Bowling for Columbine, Michael Moore was struck by how laid back we were, and how little gun crime we had as a result. That’s Canada for you; we are not a nation of paranoiacs. We’re proud of our warm hearts and cool heads. We take special pride in our love of peace, and have sent peacekeepers on every mission that the UN has called upon us to do so.But since Harpo & Co. run a minority parliament, and they are constantly in danger of being toppled by a non-confidence vote, it stands to reason that they want to keep up every possible façade that says “Look how well we Tories can do things”. And of course, what bigger one than the Vancouver/Whistler Olympics of 2010? Never mind that the Games are not their brainchild, and that the bid was won under a previous, Liberal government. Nor that the logistical masterpiece that is the longest Olympic torch run in history is going off without a hitch. (It’s also none of their doing.) No, Harpo’s selling point is the security angle, and he’s playing it to the hilt. In other words, once again, he’s appealing to a very un-Canadian sense of paranoia, not pride.And that paranoia is why I’m not proud to be a Canadian today. When an innocent person like Amy Goodman, who has much in common with the best of Canadian values, is stopped at our border simply for being outspokenly anti-war (which I am too!), and accused of trying to foment terrorism against the Vancouver Olympics, all I can do is hang my head and wish that all these assclowns could be tossed out of office tomorrow. Peacefully, of course.PS: A Creative Revolution‘s own Pale Cold was on the Daily Kos with this, and a host of other things that suck about the situation. Don’t miss it!

This entry was posted in Angry Pacifist Speaks Her Mind, Canadian Counterpunch. Bookmark the permalink.