Can you guess what it might be? Here’s a hint: 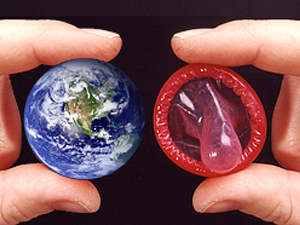 And here’s the scoop:

The planet’s population is expected to surge to 9.2 billion from the current 6.7 billion by 2050, and many fear that such unprecedented growth will push Earth’s temperatures, and thus the weight-bearing ecosystem, beyond the “breaking point.”

The heaviest population growth is expected to occur in the developing world, where women do not have easy access to reproductive health services and are giving birth like jackrabbits.India, for example, a major condom giveaway notwithstanding, is preparing for a 50 percent explosion in its numbers by 2050, topping off at 1.6 billion, thus surpassing its bursting-at-the-seams neighbor China as the most populated place.“Women with access to reproductive health services,” the UN agency said Wednesday at a conference in London, “have lower fertility rates that contribute to slower growth in greenhouse gas emissions.”

Of course, as the picture strongly hints, the responsibility for lower fertility rates should not be that of women alone. Gentlemen, do your part. Don’t be a fool–vulcanize your tool! (And don’t forget to reduce consumption of emissions-producing fuels, either. Yes, whitey, I’m talkin’ to YOU.)

This entry was posted in Environmentally Ill, Good to Know, If You REALLY Care, She Blinded Me With Science, Stupid Sex Tricks. Bookmark the permalink.