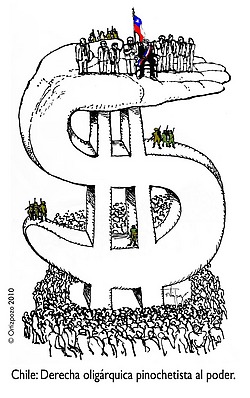 “Chile: Right-wing Pinochetist oligarchy in power.”I have a lot of feelings about this, and none of them are what I’d call good:

After winning the second round of the presidential election in Chile by a slim margin, multimillionaire Sebastián Piñera could start to strengthen his enterprises and consolidate his fortune, according to analysts.

During his presidential campaign, the businessman indicated repeatedly that he would sell his 26% stock in LAN Chile Airlines, which would raise his capital to unimaginable levels.Piñera beat out former president Eduardo Frei, of the ruling Concertación coalition party, with 51.9% to Frei’s 48%. He will be the first conservative president to rule the South American nation since the end of the 17-year dictatorship of Augusto Pinochet in 1990.According to a 2004 pact among its shareholders, LAN Chile is controlled jointly by Piñera and the Cueto family, who are heavily involved in the day-to-day administration and business strategies of the airline. Enrique Cueto is executive vice-president of the company, and his brother Ignacio is general manager.It is likely that Piñera will sell his LAN stock to the Cueto family, who already own 23%. Piñera is also owner of the Chilean TV network Chilevisión, and has said he would not sell it but would place it in a blind trust instead.Along with minority stock in various other local businesses, Piñera holds a 13% stake in the Colo-Colo soccer club, which he has also said he would not sell, according to the Wall Street Journal.

Translation mine.Note that he won on the second round, by a slim margin. That’s no indicator of great popularity or enthusiasm for this right-winger (who styles himself “centre-right”, always a worse term than “outright fascist”) on the part of Chilean voters. Especially not when you consider how many abstained in protest of the lacklustre slate to choose from. Or the fact that he lost on the second round five years ago, to Michelle Bachelet.The implications of it all, however, are best summed up by this report by Katherine Hite and Peter Kornbluh:

A Pinera victory will mark a major turning point in the post-Pinochet transition, and perhaps a return to power of some of the hardcore rightists who collaborated with the military regime. (Pinera’s brother served as Pinochet’s Minister of Labor.) For twenty years the Chilean center-left political elite has governed in a stable if cautious approach to Chile’s economic and political evolution; the coalition is now paying the price for failing to build and mobilize a mass base. The historically strong political parties that make up the twenty-year governing Concertación alliance have failed to excite or incorporate young people. (Current legislation requires all registered voters to cast ballots, but it is not obligatory to register to vote. Of a total of 12 million potential voters, close to four million, or 31 percent, are unregistered. A law is pending that would make registration automatic and the vote voluntary.)

The museum reflects a similar political dynamic. Bachelet’s administration initiated the project with little participation of the human rights constituencies who might have played a role. Still, the existence of the museum is the culmination of a persistent struggle by human rights groups for a major public recognition, in a major public space, of the state terror that took place under Pinochet. Over the past decade, organizations of victims and their families have led successful efforts to establish a range of memorials, which now dot the country. Until now the administration resisted representing the past in any way that would be interpreted by the Chilean right, particularly, as “taking sides.”

It’s pretty clear to me that trying to paint oneself as a centrist, if one is on the left, is cowardly and will lose you votes–although, as we can see from the first paragraph in the quote, those votes did not automatically go to the crypto-fascist who, being equally cowardly, also tried to paint himself as a centrist. Those votes were altogether lost, by either non-side. (Remember that old saying about what’s in the middle of the road?) Abstention, not popular will, decided this election.Idiotic crowings aside (gosh, who knew that Chile had had 52 years of unbroken leftist rule, even under Pinochet?), this marks no actual turning point in Chile at all. It is a sign only of how badly things have stagnated, and how poorly the Concertación has done when it decided to shut out the true left, which might have become its conscience and backbone. Whoever doesn’t stand up, gets run over; it’s obvious that that’s what happened here.And no, I don’t share this prof’s view that it’s “ultimately healthy”, either. The “dentist”, in this case, is well known for his callous disregard for the victims of a butcher he worked with in the past. It is not a “healthy” change by any means–unless one’s idea of health is being left utterly toothless, and able to eat only pablum.Piñera has already gotten off to a bad start, slamming other LatAm leaders whose popularity, unlike his own, is not in doubt, and who do not, like him, have a cloud of conflicts-of-interest hanging over their heads. Not a wise move for one who is the scion of a family of wealthy diplomats; he should watch his language, or he’ll find himself shunned, like the luckless Pepe Lobo, when he takes the sash. If Piñera thinks he can run Chile like a business in which he owns a large block of shares, he’s in for a nasty shock. A country is not a corporation, and cannot be run corporate-style; “one man, one vote” still applies. And there are a lot of Chileans who did not vote for him; they are, in fact, the majority. About all I can foresee at this time, however, are lots of protests. Whether they will generate a true popular leader, as they did in Bolivia, I do not know. Chile doesn’t have much of a history for that, other than with Salvador Allende, and we all know what happened to him.

This entry was posted in Chile Sin Queso. Bookmark the permalink.