Um. Nice president you got there, Colombia. 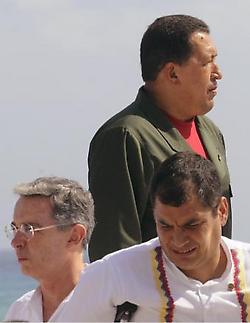 Discord at the Cancún summit. An unexpectedly revealing photo of three leaders, only two of whom get along well all the time? Sure looks like. Guess which…So, Chavecito’s the regional troublemaker, is he? Not even hardly. Guess who came to Mexico just to blow snot all over everything. Story from Aporrea:

The president of Colombia, Alvaro Uribe, picked a nasty fight with the Venezuelan president during lunch at the Rio Group Summit.

Uribe, who arrived late, provoked a heated discussion and was almost beside himself when he interrupted President Chávez as he was explaining how commerce between Venezuela and Colombia had increased eightfold since he (Chávez) had come to power in 1999. Trade between the two nations rose from 1.6 billion dollars that year to 7.9 billion in 2008. It was then that Uribe interrupted, comparing the recent shut-down of trade with Colombia to the US blockade of Cuba.Uribe continued interrupting the Venezuelan leader as he was defending his position. Chávez asked him to let him finish his speech, and when he saw it was impossible to get Uribe to calm down, he told him to “go to hell”. Other sources who attended the luncheon explained that the Cuban president, Raúl Castro, who was attending the Rio Group Summit for the first time, tried to mediate between the two leaders to put an end to the argument.Uribe was the last president to arrive at Playa del Carmen, a seaside resort on Mexico’s Caribbean coast. There, he incorporated himself in sessions that had already begun, attended the official photo session, and later the luncheon offered by the Mexican president, Felipe Calderón.

Translation mine. The cause of all this altercation? Chavecito doesn’t appreciate the fact that Nasty, Brutish & Short is letting the gringos use Colombia for a staging ground to spy on, intimidate, and commit acts of aggression against, the sovereign nations of South America. Chavecito also didn’t take kindly to Uribe’s lies that he was supporting the FARC. The issue came to a head last year when Chavecito ordered the borders closed and all imports from Colombia stopped. The borders soon reopened, but trade did not. That’s what’s got Uribe all hot under his too-tight collar. He’s losing money and credibility daily, and the longer this goes on, the more Colombia’s gonna be hurting. (Yeah, surprise, Colombia’s most important regional trading partners, in terms of impact on the lives of smaller producers, aren’t the guys who buy their blow and their bananas, but those who buy their beef. That’s spelled V-E-N-E-Z-U-E-L-A. And if the latter keeps boogying with Argentina on that one, well…)Long story made short: Uribe picked the worst possible way to try to lance this festering sore and reopen trade talks. His petulant attitude is gonna cost him. Worse, it’s gonna cost Colombia. Which can ill afford to lose the goodwill of its neighbor, when all’s said. You can’t make up for that by any amount of toadying to Washington, no matter what anyone says.The question is now open as to who will get the blame from the lamestream anglo media for this undiplomatic incident. Place your bets, ladies ‘n’ gents…PS: For extra shits ‘n’ giggles, hear Mario Silva’s take on it all (in Spanish) here.

4 Responses to Um. Nice president you got there, Colombia.