Posted on November 20, 2010 by Sabina Becker
Just when you thought life couldn’t suck harder, it started to blow. The above is only a slight exaggeration of the already insane number of hoops we have to jump through just to visit our friends south of the border. And here’s who else is making the intolerable even worse for us this week:1. Rush Fucking Limbaugh. Hey Pigman, did you know Sasha is, in fact, a genderless name? Guess not. Guess you just never can pass up an opportunity to be a sexist shit, eh Rush?2. Joseph Fucking Tarnopolsky. Bad enough that he wrecked a 14-year-old girl’s reputation by having sex with her. And yeah, stupid move not picking someone of consenting age. But then he bitched about her in public (and yes, the tweeter counts as “in public”, since all but direct messages are generally visible), which is what drove her to suicide. Yeah, dude, your reputation is shot to shit now, and deservedly so. I hope it stays that way for life.3. Alison Fucking Reynolds. Posing as the daughter of a famous poet for purposes of tax evasion? Stupid. Posing as the twin daughters of T.S. Eliot? Doubly stupid, since he never had a child. Getting caught? Priceless.4. Virginia Fucking Thomas. Yes, Drunk Dialin’ Ginni is stepping down as head of her own teabag social club. One wonders if it had any actual members besides herself. 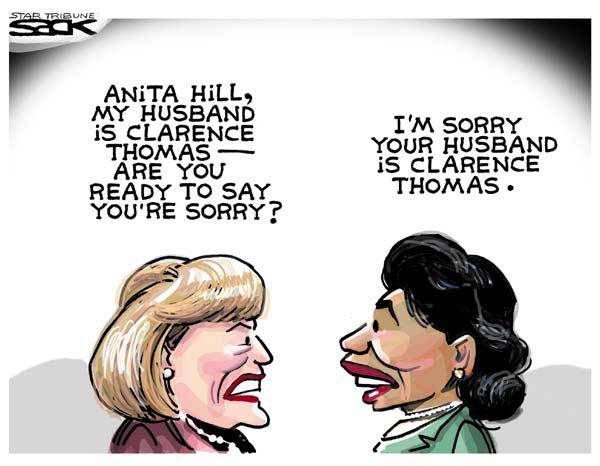 5. Rona Fucking Ambrose. I guess she does do something besides sit around flat-ironing her hair, after all. Too bad that what she’s doing is irreparable damage to the cause of missing aboriginal women…and to Canadian women’s rights in general.6. James O’Fucking Keefe. Oh look, Casanova the Douchebag is back. And this time, he’s trying to screw schoolteachers. Including one who once risked her life to protect her young charges. Fuck off, you.7. Andy Fucking Harris. I have it on the authority of the entire progressive US tweeterverse that this one is, and I quote, “the biggest assbag in the whole fucking world”. Hey, who am I to argue with Teh Tweeter? And yes, Politico-morons, he WAS being hypocritical in “pointing out the inadequacies” of the reforms…because those inadequacies exist thanks to Repugs like him. Were he and his coreligionists not such a bunch of obstructing corporatist asshats, the entire US might actually have publicly-funded, single-payer healthcare, like we Canucks do. And he would have one less thing to bitch about.8. Pat Fucking Sajak, again. Now we know why he no longer has a talk show. Why is he taking credit for “introducing” Keith Olbermann to the nation’s airwaves, as though the latter couldn’t do the job brilliantly himself? Pat, word of advice: Stick to Wheel of Fortune. At least there, you won’t embarrass yourself too much. PS: Do we really need Wheel of Fortune? For that matter, do we really need another right-wing dingbat hosting any show, period?

9. Loy Fucking Mauch. No, the Confederate flag is NOT “a symbol of Jesus Christ”, any more than a KKK cross-burning is. It’s a symbol of slavery, racism, intimidation and oppression. Also, the insanity of certain white southerners, self-explanatorily known as CRACKERS.10. Mel Fucking Gibson. Never, in the history of humankind, has anyone EVER been “calmed down” by SLAPPING. Especially not if it breaks a woman’s teeth. That said, someone please slap this crazy motherfucker and knock some of his fillings loose. He seems hysterical.11. John Fucking McCain. That Snooki thing is just plain ooky.12. Sarah Fucking Palin. Yes, “her” apolitical Alaska is SO political! Everything about it, right down to the non-government-dependent mama bears, is a “subtlety” that she’s trying to cash in on for the sake of her own ambition, which is to go on living off the government without actually working. (Also, BOOBS. Surely not a “subtlety” for our Christian “feminist” Sarah either, eh?) PS: WTF is “lazzay fare”? Was she trying to speak French? If so, cheese-eating surrender monkey FAIL. PPS: Mama Grizzly fail, too. Who raised some entitled little whiners, again? As I recall, none of the other contestants on Dancing With the Stars have a retinue of ‘bots, egged on by mom, rigging the voting in their favor. 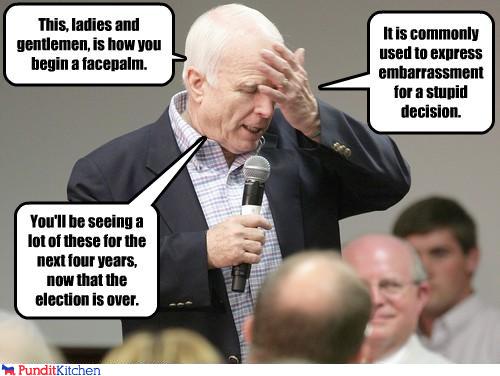 13. and 14. Willow and Bristol Fucking Palin. Snotty, bratty, conceited little homophobes, you say? Like mother, like daughters, say I. PS: Oh wait, it gets even better. One of the guys Willow got all snotty with is fat because he has Crohn’s disease and takes steroids for it. Can you say LOW? PPS: Bristol, get the fuck off the air, NOW.15. Vic Fucking Toews. No, the US does NOT have a right to any of our info. If we’re flying over them without stopping, it hardly concerns them as long as the plane keeps going and doesn’t blow up or sma
ck into anything. And even if we do stop in–what business is it of theirs? All this stupid right-wing talk of small government is just sheer bullshit hypocrisy when the right-wingers are the most intrusive snoopers in our private lives when they get into government.16. David Fucking Barton. Your blatant homophobia makes me want to kick you. Right between the legs.17. Joanne Fucking Hill. Yeah, I’m sure George Galloway will be totally fooled by pro-Israeli fascists dressing up in, and I quote: “…a keffiyeh or hijab or hippy-type clothing (blue jeans, Birkenstock sandals with socks, hand-woven Guatemalan man-purses, long scarves on men, etc.)” Get with the times, JoJo…blue jeans are not just for hippies anymore, and your stereotyped descriptions are actually going to make your minions stick out like the sore thumbs they are. Nowadays, leftists and Muslims can wear whatever they like…and some of us socialists don’t lug our shit in hand-woven Guatemalan purses, but in top-grain leather. PS: Pro-Palestinian lefties aren’t the confused ones, either, JoJo.

18. Michael Fucking Ben Ari. From the heart of my “bloody” German bottom to you, sir bigot–KISS MY ASS. 19. All the fucking Palinbots gaming the system on Dancing With the Stars. We see what you did there. Your talentless homophobic hack won’t win, don’t worry. You can quit forging e-mail accounts now.20. Robin Fucking Dubner. You know you’re losing the public debate on Palestine when you have to pepper-spray some nice Jewish peaceniks.21. Peter Fucking Skaarup. Trust me, bare boobs will NOT scare Muslims (or any other unwanted immigrants) away from Denmark. Try inviting Yoani Fucking Sánchez, her face (and more importantly, her hideous crapaganda) could stop anything. 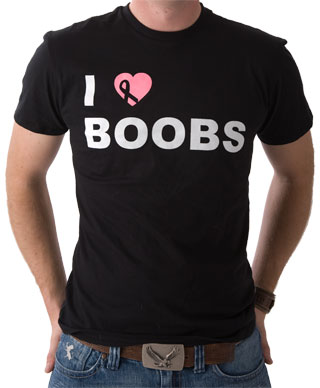 22. Peter LaBarbera. Yeah, I’m sure there are tons of gay TSA screeners who just can’t wait to get their hot little hands on your poor, unloved cock. Actually, I’m even more sure that this is your deep, dark, inadmissible sexual fantasy talking, and nothing more. PS: I’m sure Barney Frank appreciates knowing that you masturbate over his picture, too. 23. Michele Fucking Bachmann. Who voted for this crazy bitch? Whoever did, the blood of democracy is on your hands, you fucking idiots.24. Keith Fucking Ablow. I really don’t care to learn about “Seven Wonders That Will Change Your Life” from anyone who’s hot for the cheesy, hemorrhoidal bod of Glenn Fucking Beck.25. Fucking PETA. Why? 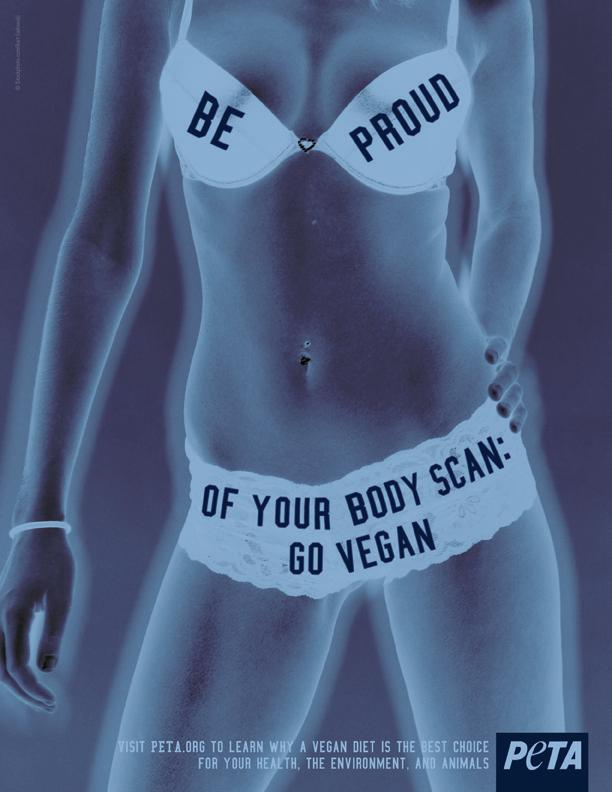 That’s why. Let us count what is wrong with this picture: Bullshit (there ARE fat vegans, which kind of puts a crimp in PETA’s spin); misogyny (nothing new for PETA); bullshit (the scanner doesn’t show you flatteringly posed in your prettiest undies, but awkwardly naked) and oh yeah, did I mention bullshit? This is not an environmentally or humanly friendly device. The scanner carries an elevated risk of skin cancer. Are these strident morons telling us to be proud of that, too? Thanks, PETA idiots, for yet another epic fail. 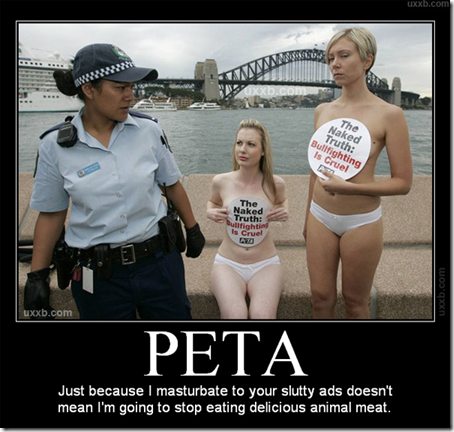 26. Stephen Fucking Harper. Now we know why he packed the Senate with unelected SupposiTories. It was so Canada would never do anything about climate change–which, ironically, affects our far north disproportionately, and makes him look like an ass on Arctic sovereignty everytime the pack ice melts. Which it’s doing faster and faster nowadays.27. Bryan Fucking Fischer. You and your bloodthirsty sky-pixie can both go to hell. None of the wars currently raging are anything remotely resembling “just” wars.28. The Fucking Grauniad, again. When you publish the insane burblings of Pamela Fucking Geller, you’re not a news site anymore. Even under Comment is Free, that’s just beyond ridiculous. She has her own shitty blog, let her flap and squawk there; she doesn’t need another forum, much less from a once respected British centre-left newspaper. Which you no longer are. You are through the Looking Glass, right in the heart of Fascist Crapagandalandia.29. Gretchen Fucking Carlson. Self-defecate much? Hahahahahahaha. Awesomest Freudian slip EVER.30. Pete Fucking Arnold. Behold the hypocrisy of the “libertarians” when it comes to a woman’s body. Here’s the Man of the House, using his (presumably pregnant) wife to “prove” some kind of patriarchal point about abortion. He wants other people to vote on whether she gets one or not–banking on it that the majority will say no, proving some anti-choice shit or other? There’s only one vote that counts–HERS. Nice of Sexist Troll Boy to forget that. Sorry, Petey-pants, but I’m not biting…being truly pro-choice, I’m not going to make up someone else’s mind for her. But I will say this: Hey, Alisha–ever consider divorcing this loser? 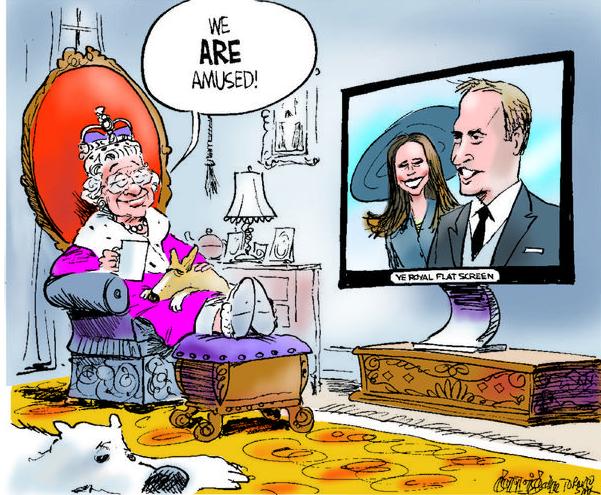 31. Robert Fucking Poole. What’s his answer to the TSA’s invasive porno-scanners and gropings? Letting the private sector do the exact same things, for profit, with even less-adequately-trained screeners. Pas
sengers would pay through the nose for this privilege of having their privacy violated by an underpaid stranger. The private sector is, incidentally, the one responsible for giving us those porno-scanners in the first place.32. Cindy Fucking Jacobs. She wonders why heads of state don’t consult the likes of her? Superstition and stupidity on her part might have something to do with that. But of course, she calls those traits “prophecy, discernment, and wisdom”. That’s the demon Delusion talking, kiddies.33. Chris Fucking Bentley. Talk about someone who just doesn’t get it. Right as transgendered people hold their annual Day of Remembrance for fellow transfolk who died at the hands of haters, the so-called attorney general of Ontario won’t move to amend our provincial human rights code to include gender identity as a basis of hate crime. Not only are transfolk being made to risk their lives selling sex to pay for their gender realignment, the province isn’t doing the least little thing to protect them from the violent trolls lurking out there, waiting for an opportunity to “cleanse” society of them. This is actually worse than a wank; it’s tantamount to murder. PS: Special boos to LifeShite for abetting this blunder with a lot of crazy theory of their own.34. The Fucking Vatican. Oh, oh, oh. Condoms are now okay, but only for male hookers. That still leaves the vast majority of HIV-positive people defenceless, for those keeping track. Pity those who take Rome’s directives seriously. And then go out and get thee a pack of Ramses.35. Cedric Fucking Miller. Facebook is a “portal to infidelity”. So says a man who clearly didn’t need it to help him mess around. Feel free to share that linky on all your fave social media networks, kiddies. 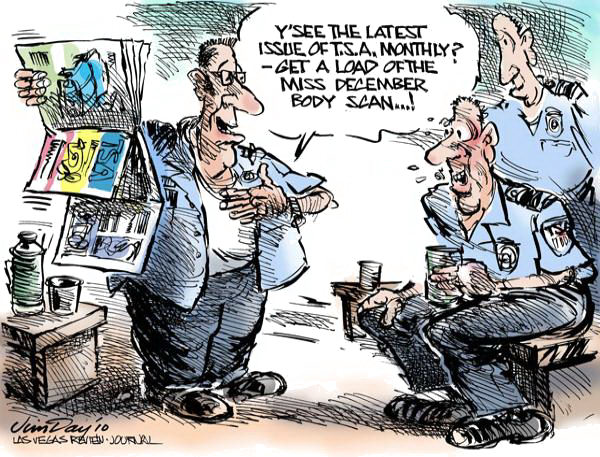 And finally, to the mouse that croaked in my study this week, somewhere out of reach behind a wall. You miserable, stinking little motherfucker! Being in the same room with you is like breathing secondhand smoke mixed with rotting cabbage and shitty diapers, only worse. I can’t wait till you desiccate. If only there were a hell, I’d wish you would rot there, and save me the grief of smelling you.Good night, and get fucked!

1 Response to Wankers of the Week: T ‘n’ A–er, TSA–edition