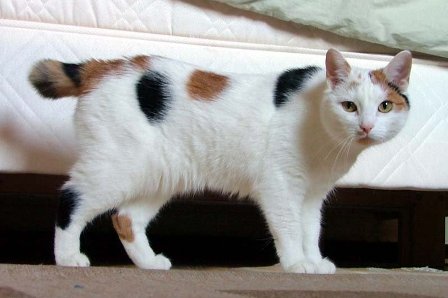 The Stumpy Cat as been prowling all over the Internets today, trying to make sense of the Tucson Massacre. As usual, when this kitty goes mousing after the news, she catches something…and it doesn’t squeak away:

First up, Ms. Manx is wholly in agreement with everything Cenk Uygur says here. Derangement does not happen in a political vacuum. Right-wing politics made Jared Loughner what he is…not merely a disturbed, mentally ill kid, but someone who slipped through any number of cracks, including those in the gun laws. And the right wing is to blame for those cracks being as wide as they are.

Second, the Stumpy Cat is pleasantly surprised at William Saletan’s analysis. He doesn’t often get it this right. If Joe Zamudio is a hero in Tucson tonight, it’s not because he was armed, but because he didn’t shoot when he helped to disarm the shooter.

The Manx also managed to dig up a self-described “God-fearing American” who prefers sanity over the status quo. Key quote: “Check your guns at edge of town, is my idea. Leave it home locked up. It worked in the Wild West, it should work here too.” Oh yeah, and he’s from out west, so that’s how he knows.

And the WSJ has uncovered something worrying: Mentally ill individuals have no trouble getting their hands on guns. Given the guns are used in suicides as well as homicides, this is a major public health issue. Yet the NRA is still doing its damnedest to bury that fact.

On a related note, at Alternet, Karl Frisch writes:

The Second Amendment reads, “A well regulated Militia, being necessary to the security of a free State, the right of the people to keep and bear Arms, shall not be infringed.” I for one would prefer it if such a “well regulated militia” did not count violent criminals and the mentally disturbed among its membership.

Ms. Manx adds: Jared Loughner was debarred from joining the real “well regulated militia”, the army, on grounds of mental health. A pity that an amendment written in the days of flintlocks and muskets, when the newly independent colonies did not have an army, should still be erroneously construed to mean that anyone can get their hands on a gun, even a lunatic–and this in the age of assault weapons. Call that “well regulated”?

And finally, at Straight Goods, Linda McQuaig nails it by pointing out the media’s complicity in the toxic political culture. Why so cowardly, journos? Afraid you’ll get shot? What’s the matter…cat got yer tongue?

4 Responses to Short ‘n’ Stubby: Of Manxes and massacres