Payola: Not just for $ and P anymore! 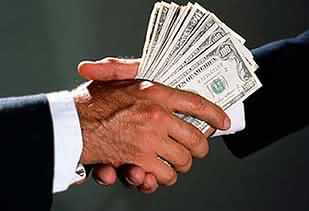 A while back, I posted about how a certain ratings agency takes payola. Now, it looks like another one also does:

A former senior analyst at Moody’s has gone public with his story of how one of the country’s most important rating agencies is corrupted to the core.

The analyst, William J. Harrington, worked for Moody’s for 11 years, from 1999 until his resignation last year.

From 2006 to 2010, Harrington was a Senior Vice President in the derivative products group, which was responsible for producing many of the disastrous ratings Moody’s issued during the housing bubble.

Harrington has made his story public in the form of a 78-page “comment” to the SEC’s proposed rules about rating agency reform, which he submitted to the agency on August 8th. The comment is a scathing indictment of Moody’s processes, conflicts of interests, and management, and it will likely make Harrington a star witness at any future litigation or hearings on this topic.

The primary conflict of interest at Moody’s is well known: The company is paid by the same “issuers” (banks and companies) whose securities it is supposed to objectively rate. This conflict pervades every aspect of Moody’s operations, Harrington says. It incentivizes everyone at the company, including analysts, to give Moody’s clients the ratings they want, lest the clients fire Moody’s and take their business to other ratings agencies.

Moody’s analysts whose conclusions prevent Moody’s clients from getting what they want, Harrington says, are viewed as “impeding deals” and, thus, harming Moody’s business. These analysts are often transferred, disciplined, “harassed,” or fired.

In short, Harrington describes a culture of conflict that is so pervasive that it often renders Moody’s ratings useless at best and harmful at worst.

Useless at best and harmful at worst. Hmmmmmm, that sounds like a pretty good summation of crapitalism itself. The more we dig below the surface, the more it looks like a pay-to-play system all around. And the more dirt the Invisible Hand of the Market coats itself in, the more we see just how untrustworthy it is.

This entry was posted in Crapagandarati, Economics for Dummies, Filthy Stinking Rich, Isn't It Ironic?. Bookmark the permalink.

2 Responses to Payola: Not just for $ and P anymore!