Citizens of Caracas hold up a banner thanking President Chávez for bringing home the gold in the name of their sovereignty. 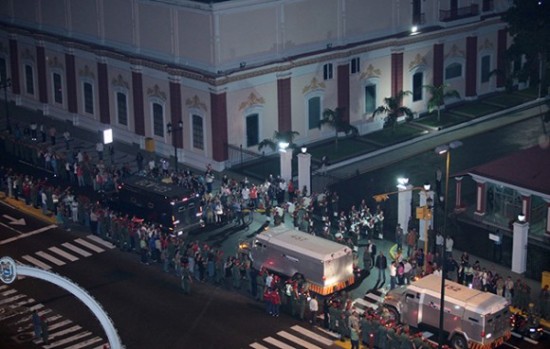 A welcoming crowd lines the streets of Caracas as the armored trucks carrying the first gold shipment pass on their way to the Central Bank.

The first shipment of the gold which Venezuela had kept in European banks, was received today amid great celebration by Venezuelans.

Almost immediately, Venezuelans mobilized to accompany the caravan transporting the reserves to the BCV.

“Impressive mobilization of the people of Caracas to receive our national gold,” tweeted parliamentary deputy Freddy Bernal, who was present along with other functionaries and citizens in the streets.

Shouting “The gold is ours”, the people of Caracas lined the streets to watch the caravan of armored trucks pass.

Nelson Merentes stated that there were a little over $300 million (US) worth of gold in the first shipment, which arrived on Friday, and was transferred to the BCV’s vaults.

Merentes emphasized that “we have the physical, technical and human capacity to look after the gold resources which are being transferred to the vaults of the Central Bank.”

Why is this significant? Well, just look at the headlines. Europe is in crisis, with even Italy — Europe’s third-biggest economy — unable to pay off its debts. Bankers are demanding sacrifice and austerity in the form of public service cuts, even as their own wallets grow fatter.

And since these Venezuelan reserves came out of European banks, it’s not only a statement of sovereignty on Chávez’s part, it’s also a served notice that Venezuela wants no part of the European crisis, and will not allow its gold to be part of the bankers’ insane gambling spree. In other words: Venezuela is opting out of the global crisis of capitalism.

And a glance at Venezuela’s own history and economic crises of the past makes it clear why they are doing so, and why ordinary Venezuelans support their president and their central bank in this momentous decision:

In a secretive operation, on Friday, August 5, 1988, eight tons of gold that had been under guard “suddenly left” the country, according to denunciations at the time by communist deputies, in the face of silence from the predominant politicians of the era.

Later, on February 21, 1989, the recently elected (for the second time) president, Carlos Andrés Pérez, revealed something similar on the front page of the newspaper, El Nacional: “BCV ships eight tons of gold to London.”

The transfers of gold out of the country began during the early days of “representative democracy”, under Rómulo Betancourt. Approximately a third of the country’s total gold reserves were placed in the Federal Reserve Bank of the United States, as a guarantee for a $2 billion loan, contracted by Betancourt, which was already cancelled before 1989.

The dates are significant. In February and March of 1989, the streets of Caracas were awash in blood as the Caracazo raged, and Carlos Andrés Pérez sent the police and army out to fire on their own fellow Venezuelans. For what? For rioting against a crisis manufactured, in large part, by capital flight, corruption, debts to foreign banks, and austerity measures virtually identical to those being protested in Europe right now.

Riddle me this: If Venezuela had all that gold, what did it need a fucking $2 billion loan for?

Rhetorical question, kiddies. Venezuela didn’t need that loan at all. (Venezuela is not a poor country, it is a rich country that was MADE poor.) The US needed it…to pay itself for all the half-assed “development projects” it undertook in Venezuela. Most of them having to do with getting quick, easy and cheap access to Venezuelan oil…and oh yeah, Venezuelan GOLD. And putting in just enough infrastructure to make it look like something was trickling down, and to make sure that the two predominant “democratic” parties, the “liberal” Acción Democrática (AD) and the conservative COPEI, had enough spending money to throw around buying votes in the poor barrios with fresh paint for the houses, bags of groceries, and so on.

Venezuela’s oil and gold could easily make ALL foreign loans unnecessary, but to assure that they didn’t, one corrupt “democratic” government after another sent Venezuelan gold out of country and tied it up in various foreign reserve banks. “To keep it safe”, or so it was said.

In reality, that gold could not have been LESS safe. It was being used as collateral by the foreign bankers to back up their gambles in stocks, bonds, and oh yeah, FOREIGN DEBTS. And as financial deregulation came into vogue around the world, that kind of collateral came in VERY handy.

And that’s why Venezuela wants its gold at home, and why it’s very smart of Chavecito to bring it back, RIGHT NOW. Venezuela is going to weather the so-called global recession better than Canada and the US, and certainly better than Europe, as a result of this simple, sovereign move.

This entry was posted in Barreling Right Along, Canadian Counterpunch, EuroPeons, Good to Know, Huguito Chavecito, Isn't It Ironic?, Merry Old England, Socialism is Good for Capitalism!, The United States of Amnesia. Bookmark the permalink.