Ahem. Make that two and a HALF million… 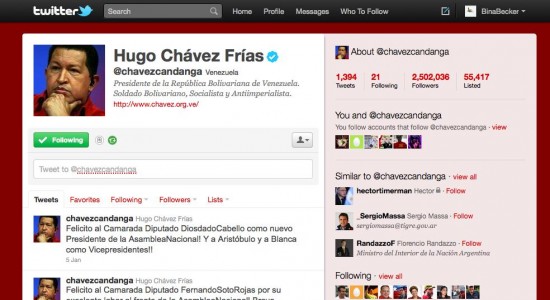 And now, the story from Aporrea:

At 10:06 this morning, and three months shy of his second anniversary on Twitter, President Hugo Chávez made history as the most-followed head of state on the social network, with two and a half million followers.

1394 tweets, following 21 tweeters, and found on 55,400 lists, @chavezcandanga exceeded all expectations. We can emphasize that he has more followers than @Facebook, which was created on December 7, 2009.

Here is a list of the most-followed heads of state in Latin America, as of 10:21 am:

No doubt about it, this is one more demonstration that the Bolivarian Revolution is consolidating itself in all spaces, considering that @chavezcandanga is one of the best communicators in history.

Translation mine; linkage as in original.

If the Internet is the marketplace of ideas, then it looks like a leading anticapitalist is the top seller. Outpacing even Facebook on the tweeter — how about that?

And if you think it’s just a tweetish fluke, I can assure you it’s not. His messages also appear on Facebook, and get huge numbers of “likes” in no time at all. The only one who gets “liked” faster is Cristina Fernández (a.k.a. CFKArgentina), mainly because she uses Facebook more she does Twitter. Which she does almost as much as Chavecito.

But then again, Chavecito has only to get on Facebook himself (he doesn’t seem to have a personal profile there yet, only a generic “politician” page and a whole slew of fan pages), instead of simply linking it to his Twitter account. The day he does is the day Facebook’s entire server farm crashes from all the happy Bolivarian traffic welcoming him aboard the Internet’s biggest time-suck.

This entry was posted in Brazil is the Bomb!, Chile Sin Queso, Don't Cry For Argentina, Ecuadorable As Can Be, El NarcoPresidente, Festive Left Friday Blogging, Huguito Chavecito, Mexican Standoffs, Socialism is Good for Capitalism!. Bookmark the permalink.