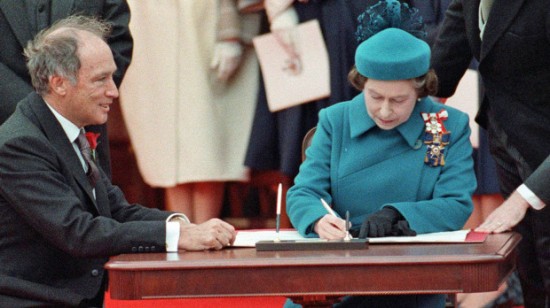 It’s been thirty years this week since Pierre Trudeau brought our Constitution over from England, and appended our Charter of Rights and Freedoms to it. Cause for celebration? Definitely, and especially in light of this:

“Could it be that Canada has surpassed or even supplanted the United States as a leading global exporter of constitutional law? The data suggest that the answer may be yes.” So conclude two U.S. law professors whose analysis of the declining influence of the American constitution on other nations will be published in New York University Law Review in June.

As the first Commonwealth nation to adopt a bill of rights, Canada has influenced other former British colonies as they create or revise their own constitutions, the study finds. Israel, Hong Kong and Eastern European countries have also drawn from the Canadian example.

Both the Charter itself and the nation that gave birth to it serve as an example to the world. “Some countries may be especially prone to borrow from the Canadian Charter of Rights and Freedoms because they perceive themselves as sharing the same goals and values as Canadian society,” write David S. Law, who is professor of law at Washington University in St. Louis, and Mila Versteeg, who teaches law at University of Virginia.

In contrast, professors Law and Versteeg conclude that the American constitution, once the foundational document for new nations in search of a government, has fallen out of favour. It fails to protect rights, such as freedom from discrimination based on race or sex, that are considered fundamental in our time; it enshrines rights, such as the right to bear arms, that other nations don’t value; its courts increasingly interpret the American document so perversely – by claiming that it must only be applied as the founding fathers originally intended – as to render it useless as a tool for tackling modern problems.

Bam! Suck on that, con-tards. While you’re so busy bitching about our so-called lack of cultural identity (which, by the way, is a figment of your limited imaginations!), and admiring the yanks and their Second Amendment, which was written in the days of muskets and blunderbusses (and seems to be most in favor with people as primitive and unreliable as those same), other countries are busy emulating us on the very progressive grounds you despise the most. Namely, those of our much more flexible constitution.

And more to the point, there are a lot more of those countries. And you want to know what they love most about us? The fact that we’re NOT the US:

The Charter of Rights and Freedoms not only prohibits discrimination based on race or gender, it protects mobility and language rights and enshrines the presumption of innocence. It balances the rights of legislatures and courts through the “notwithstanding” clause, which gives the federal and provincial parliaments limited powers to override court decisions.

Beyond the Charter itself, the Canadian Supreme Court is considered an exemplar in balancing constitutional and legislative powers, a role the American Supreme Court lost entirely after Republicans and Democrats turned it into an ideological battleground.

“The Charter is widely admired, and so are the decisions of the Canadian court,” observes Peter Hogg, one of Canada’s foremost constitutional authorities. “And one reason is that Canada is not the United States.”

The U.S. study, which offers a meticulous comparison of how constitutions around the world reflect and influence each other, leads the authors to conclude that “other common-law countries are looking either directly or indirectly at the Charter,” as they draft and amend their own constitutions, Prof. Law explained in an interview Sunday.

“Overall, the evolution of global constitutionalism has tilted more toward the mild-mannered country to the north than its superpower neighbour to the south,” the report concludes.

And the reason for that is our progressive, socially liberal democracy. Which the Charter has helped us to build. Its drafting was a non-partisan affair, with members of all three major parties contributing. Which means that it rightly belongs to us all.

And that’s just what pisses off Harpo, who would like nothing better than to see his not-so-new Conservative party owning our country in perpetuity. Little wonder, then, that he is so petulant as not to be celebrating this milestone.

Tough toenails, Harpo. Canada is a progressive country still. And it will go on being one in spite of your efforts to make it over in your own regressive, repressive image. It will still be one long after you are dead and gone. Our progressive base is too strong to be snuffed out by you or anyone.

I guess it’s asking too much to tell you to stuff your spite and get over yourself. Doesn’t matter; the rest of us are quite content to celebrate this cornerstone of our national identity…without you and yours.