Crappy weekend, everyone! Well, how about that Higgs boson? Yes, they finally found the elusive “God particle”! What it portends for us mere mortals is yet to be determined. But one thing’s not in doubt: There are still an awful lot of wankers out there, and they cannot be explained by any science known to humankind. And here come this week’s prize idiots, in no particular order:

2. Keith Fucking Mason. Dear woman-hating personhoodlum: So, someone spray-painted coathangers all over your pwecious widdle house and it scared you a teensy-weensy bit? Well, I would care, but you see, I’m so busy trying to make sure your ilk doesn’t take away the rights of half the human race that I have simply run out of shits to give. Maybe now you’ll understand what it’s like on MY side of the fence, and that of doctors who are only trying to provide needed surgeries to women without getting shot or firebombed out of all THEIR personhood. Or maybe not, seeing as you’re not exactly the fuck-giving kind. (Or the kind worth giving a fuck about.)

3. Joe Fucking Walsh. The Internets have been unanimous all week that this teabag (also a famous deadbeat dad, BTW) is a dickweed for insulting Tammy Duckworth…a politician who lost both legs in Gulf War II. Heartily seconded from up here. He’s a real piece of work, and by work, I mean SHIT.

4. Marty Fucking Golden. His idea of job preparedness reads something like an old ad for the Barbizon School: Be a model…or just look like one. Honestly, I had no idea that Pretty Woman was actually a job-training video!

5. Linda Fucking Harvey. I think I know what her sexual fantasies are. Adultery and neo-pagan cosplay, natch! But srsly, that woman needs a sassy gay best friend to save her from her fatuous self.

6. Nell Fucking Diamond. Bankster’s daughter shows how little class all that money actually buys by tweeting stupid shit while her dad falls on his sword for scandal-ridden Barclay’s amid the collapse of capitalism. Hey sorority girl, if you’re gonna tell people to hold your dick, shouldn’t you actually OWN one, first? You can’t buy that. And what is up with those gaudy, ATROCIOUS clothes? Buy yourself a wardrobe consultant…if you can still afford one when this shitstorm’s over. Ha, ha. 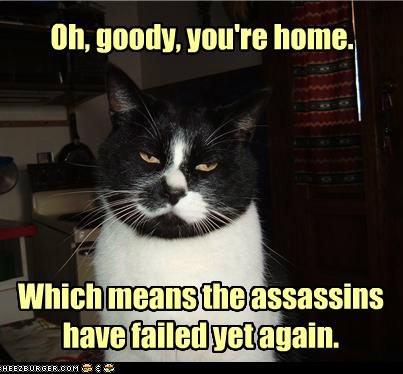 7. and 8. Susan Fucking Horton and Sarah Fucking Cullum. These two raging bigots may be finished as nurses, but I think they’ve got a brilliant future ahead of them in the British Nazi Party. Or, alternatively, as soccer hooligans.

9. Bill O’Fucking Reilly. So, he apologized for being an idiot? Um, no. That was a non-apology “apology”. If you say “I apologize, but I’m not really sorry”, that’s meaningless. You’ve negated the whole point of apologizing. And he ought to know that, but in this age of the non-apology, he chose to overlook it. Basically, that makes Billo…still a fucking idiot.

10. Allen Fucking West. Well, so much for the idea that gun-nut con-tards are all about small government and less taxes. This one is all about forcing people to buy guns…or pay taxes. Figure that out if you can; the sheer fucking stupidity of it makes my head ache. I suspect the only way this COULD make sense is if he’s in the pocket of the Glock corporation.

11. Dean Fucking Del Mastro. Now hear this: Greta Fucking Garbo vants to be left alone! No, sorry, that was his cousin David. But still! Okay, when you’re done picking yourself up off the floor and have wiped the tears of laughter from your eyes, sober up and consider this: He went into politics voluntarily. He chose the public life. He broke election law and overspent on his campaign just so he could be there. And now he wants the media to leave him alone? BWAAHAHAAHAHAH! Sorry, Dean, but you made your bed. You invited them into your life. You’ll have to suck in your considerable gut and just deal with it. Or resign and go back to being a sleazy car salesman. Better still, GO TO FUCKING JAIL. It’s where you belong, and you’ll be out of the public eye for a good long time. Just like you vant…er, want!

12. Flora Fucking Burkhart. Ice cream can’t mend everything, and neither can it excuse anything. Especially if you rear-end someone else out on the road.

13. Justin Fucking Bieber. Smarten the fuck up, little boy. “Yo’ mama!” is not the proper response. To anything.

14. Ann Fucking Romney. I have officially lost all respect for her (not that I had all that much to lose in the first place). If there is one thing, just one, that I am looking forward to this fall, it’s watching that black guy from Hawaii beat this crazy bitch’s out-of-touch rich husband with a landslide.

15. Herman Fucking Cain. Somebody please teach this fool some history. Canada, which is STILL officially under British rule, abolished slavery and became a haven to escaped slaves LONG after the US declared independence from Britain. Which abolished slavery long before the US got ’round to it. Oops! Guess someone was born on the wrong side of the Underground Railroad tracks, eh?

16. John Fucking Stossel. Too bad this Randroid motherfucker isn’t homeless for real. I’m sick of him and his lying ‘stache propping up corporatist highway robbery. And on that note, let us pray…

17. Rush Fucking Limbaugh. Women vote “with emotion”? This from a guy who constantly whines and rages like he’s gonna bust a fucking blood vessel on the air. You know what? I wish he would. Get some of that fucking male emotion out of politics, for a change. And no, I do NOT believe he was joking. All he ever says is feminazi this, feminazi that. With a red, contorted face, and his twenty chins juddering with real outrage. It is NO JOKE. It is pure projection of his own male-dominant, rage-driven fascism, and the sooner we realize that and get his fat ass the fuck off the air for good, the better.

18. Conrad Fucking Black. Yes, Lord Blah-Blah is well and truly back, and blatting his usual pompous horseshit. This time, it’s about how the world “worked so much better in colonial times.” NOT FOR THE COLONIZED IT DIDN’T, YOU SHITTY FUCKING PSEUD. And on that note, it is now past time Canada became a republic. We don’t need any more stinking lords of light rail stations and masters of bugger-all fucking it up for the rest of us.

19. Jane Fucking Pitt. OMG, Brad Pitt’s mom is a flaming racist homophobe and anti-choicer. Either that or she’s hideously senile. In any case, you kids stay off her lawn, you hear?

20. Lou Fucking Engle. It’s summer, Pride festivities are in full swing…you know what that means? Yep, there’s a twister full of rainbows, glitter, and really hot dudes coming our way. It’s the homo-sex-you-all tornado, and this wanker is just loopy enough to think it’s real. And that Teh Ghey is contagious…and that prayers will stop it…and that ex-gays actually exist, and that they can cure AIDS. Someone kindly inform Dorothy that she’s not in Kansas anymore.

21. Valarie Fucking Hodges. Funny how a Repug whose own hairdo is full of diversity (helmet, beehive, AND mullet, all on one head!) can be so anti-diversity when it comes to religious education. Guess no one explained to her that Christianity isn’t the only religion, not even in her hickish neck of the woods. Poor dear!

22. Ted Fucking Nugent. So, the Noodge thinks it might have been better if the South had won the US Civil War? Considering he and his ilk would probably be poor white trash without so much as a broken-down mule to their name if that had happened, it might certainly be more amusing (and karmically fitting). But the reality would also comprise slavery and snake-handlin’ fundie nutcase megachurches. And no opportunity for betterment if you’re born poor and snaggletoothed. So no, I wouldn’t wish that on anyone. Not even HIM.

23. Mitt Fucking Romney. Yes, Mittens wanked again. This time over Venezuela. And, newsflash to the dog-abusing bonehead: VENEZUELA IS FREER AND MORE INDEPENDENT THAN YOUR COUNTRY WILL EVER BE. Thanks to the brown dude with the afro-curly hair whom you love to bash, and no, I don’t mean Barack Obama. Chavecito is a true follower of Bolívar; Mittens has no fucking idea who Bolívar even is. In other words: totally par for the course where US politicians go. Bashing the ‘Cito is a rote, bipartisan affair.

And finally, to anyone who still thinks being gay is the “gateway” to AIDS in this late day and age. “Scientifically”, yet. Tell it to all the heterosexuals — oh sorry, “real men” — who’ve contracted that goddamn disease…some of them, no doubt, thinking it was a “gay plague”, and that they wouldn’t need to take precautions. Better still, tell it to all the lesbians who haven’t got it, and never will, unless some fucked-up straight dude tries to administer some “corrective” rape. Go over to Africa and tell it to the villages where there are no young adults, just children and their grandparents, because AIDS killed off everyone in between. I hope the derisive laughter fucking deafens you.