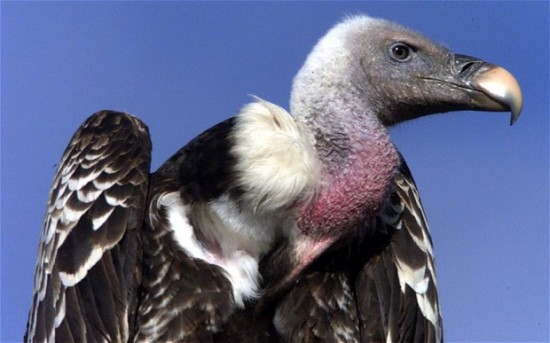 And no, this is not a metaphor for the spy industry. This shit is absolutely literal.

Sudanese officials are said to have concluded that the bird was a secret agent after discovering it was fitted with GPS and solar-powered equipment capable of broadcasting images via satellite, according to Haaretz newspaper, which cited an Egyptian website, El Balad.

The vulture also had a tag attached to its leg with “Israel Nature Service” and “Hebrew University, Jerusalem”, leading to accusations that it was on an Israeli surveillance mission.

The reports follow allegations by Sudan that Israel carried out the bombing of a munitions depot near the Sudanese capital, Khartoum, in October, after jamming the country’s radar defences.

Israel has made no comment on the raid, which left two people dead. The arms depot was said to be supplying weapons to the Palestinian militant group Hamas in Gaza.

Oh, the cracks I could make about Israeli spies being vultures. Now Israeli vultures are spies.

And of course, you know who is denying it:

Israeli officials have acknowledged that the bird, which can fly up to 375 miles a day, had been tagged with Israeli equipment but insisted it was being used to study migration patterns.

Ohad Hazofe, an ecologist with the Israel Nature and Parks Authority, told the website, Ynet, that it was one of 100 vultures fitted in October with a GPS system equipped to take distance and altitude readings but not surveillance images.

“That’s the only way we knew something had happened to the bird – all of a sudden it stopped flying and started travelling on the ground,” he said.

And here we thought radio tracking transceivers were state of the art for tracking bird migrations. Those awesome Israeli scientists decided to go all out by fitting vultures with the kind of equipment which is, quite coincidentally, used for aerial surveillance. And all this just HAPPENS to coincide with some very interesting deaths. But we’re just supposed to accept their “explanation” that this was in the name of science?

A similar discovery in Saudi Arabia last year prompted local media to report that a bird, later identified as a Griffon, had been “arrested” under suspicion of spying as part of a suspected “Zionist plot”.

Saudi officials later dismissed the speculation and criticised journalists for jumping to conclusions after accepting Israeli explanations that the bird was part of a migration study.

Well, maybe the Saudis would like to buy a bridge.

This entry was posted in Gazing on Gaza, Isn't It Ironic?, She Blinded Me With Science, Spooks, The WTF? Files. Bookmark the permalink.