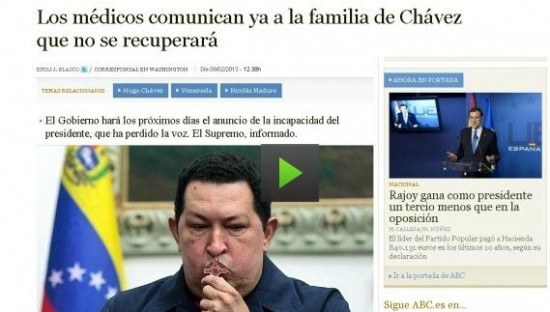 “Doctors have already told the Chávez family that he will not recover. Venezuelan government to announce in the next few days the incapacity of the president, who has lost his voice.”

The Spanish newspaper ABC claims to be certain of the deteriorating health of Bolivarian leader Hugo Chávez, and affirms that he is no longer in any fit condition to govern. The latest article, called an “exclusive” by the paper, attempts to reawaken controversy over the future of Chávez.

According to ABC, the Venezuelan leader has lost his voice, and will not recover; the Government of Venezuela could make the announcement of the president’s incapacity in the coming days.

This information comes just as the president marks three months since his departure for Cuba, where he is receiving treatment for cancer.

Chávez’s health has spawned other so-called “exclusives”, even though the information published has all turned out to be false.

Near the end of January, another Spanish daily, El País, published a photo, claiming it was a picture of Chávez intubated on a hospital bed.

However, it was actually a capture from a video on medical practices published on YouTube in 2008, showing a patient physically resembling the Venezuelan head of state.

Venezuelan authorities termed that action a “transnational media power offensive against the Bolivarian Revolution and Comandante Chávez, a campaign using the press as spearhead.”

According to numerous experts, this type of media attack against the Venezuelan president will not cease until Hugo Chávez reappears in public.

In the opinion of political analyst Basem Tajeldine, the major international media are “experts in manipulation, entrapment, and lies.” Tajeldine adds that “we have already seen in the past how they have taken a line of action in demonizing the Bolivarian Revolution.”

Meanwhile, what arrives in my inbox today but this, this and this…all, basically, just anglo media douchebags, pimping the hell out of the bogus “exclusive”. Haven’t they learned anything from the disgrace of El País?

So why are they making asses of themselves yet again? Well, it’s all in an effort to sow confusion and doubt, and maybe build support for a US-led “democracy promotion” effort that could only result in another fascist coup, like the one in Honduras in ’09. (Or the failed one in Venezuela, in ’02. The one that turned around in less than 48 hours. How soon they forget!)

But really, what they’re doing is just a vast waste of money, time and effort. If they were smart, they’d cut it the fuck out and just stick to plain old reporting. But that would mean reporting that Venezuela is now long accustomed to REAL democracy and independence, rather than banana republicanism and oil-state client status. The people have spoken; Chávez or no Chávez, the revolution is going to go on, and the Bolivarian constitution is not about to be circumvented by any opposition calls for new elections. Even if he doesn’t make it back, his vice-president is still legally authorized to govern in his place…and if he becomes unable to carry out his duties, the president of the National Assembly will take over, per the constitution. Like it or not, Venezuela will never again be ruled by a US-friendly puppet dictator (masquerading as a “democrat”!) from the oligarchy.

And the Venezuelan people will not be swayed by Operation Mockingbird, either; they are so onto the CIA and its media gambits that it’s downright hilarious to see shit like this still going on at this late stage of the game (and in the age of Wikileaks, too!)

I would also like to point out here that Chávez has just recovered from a respiratory infection, and that his much-trumpeted loss of voice is actually just a temporary result of having been intubated for a longer period of time. When he had the infection, the crapagandists were already writing his obituary, prematurely. If he were really going to die, I expect that a respiratory infection would have been enough to do it. Pneumonia, when fatal, is a rapid killer; it takes most of its victims within hours or days, not weeks…or two fucking months. That’s the amount of time it takes to clear in someone whose immune system is compromised, eg. a cancer patient. (Like, oh, say, Chavecito.)

I have to say this: As much as I despise all these corporate presstitutes and their crapaganda, I hope none of them ever have to go through a long, difficult and involved cancer treatment themselves. But I’m sorely tempted to wish it on them…because if they did, they might finally gain some scientific insight into the condition, and maybe (mirabile dictu!) some empathy for a man about whom they obviously know nothing, but just love to hate. (Yeah, I know…I’m dreaming. They’ll probably just die unregenerate. And stupid.)

Meanwhile, Chavecito’s recovery continues. Call me a crazy Canuck, call me a Chavista, hell — you could even call me Shirley, but I’m gonna take the word of his government deputies over some crappy Spanish gossip rag that probably never got any of its hacks within a mile of the Cuban coastline. He’s gonna make it.*

And oh boy, am I ever gonna rub these Koch-suckers’ noses in it when the ‘Cito returns to his presidential desk in Caracas safe and sound, and vocal as ever.

*And if you doubt me, read this. (You’re welcome!)

This entry was posted in Barreling Right Along, Crapagandarati, Cuba, Libre (de los Yanquis), El Predicto Speaks..., Fascism Without Swastikas, Huguito Chavecito, Isn't It Ironic?, Not Hiding in Honduras, Schadenfreude, She Blinded Me With Science, The United States of Amnesia, Under the Name of Spain. Bookmark the permalink.