The ironies of the Venezuelan opposition, part 10 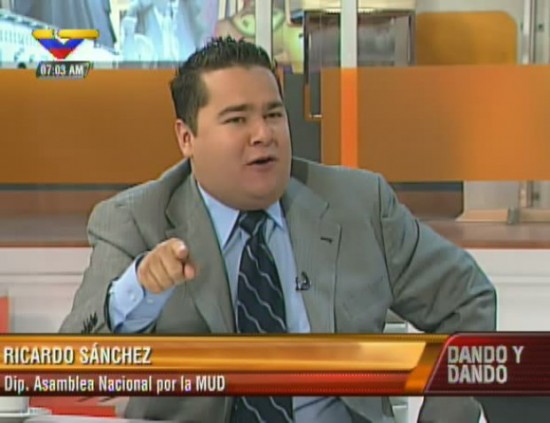 Howdy, folks. In today’s episode of VenOpIronía, we get something really interesting: an opposition deputy giving an interview not only on state TV (VTV), which allegedly “censors opposition voices”, but he reveals something the Chavistas among us have already long known or at least suspected. And it’s a source of great consternation, at least for him. So, let’s hear what he has to say:

Opposition deputy Ricardo Sánchez, who withdrew his support from the right-wing presidential candidate on Tuesday, accused Henrique Capriles Radonski and his campaign command of trying to use student groups only to create violence and thus destabilize the country.

“We uphold the right to protest. What we don’t uphold is trying to manipulate the movement, like they did in 2007, to generate situations with lamentable outcomes,” Sánchez said during an interview on VTV’s Dando y Dando.

“There were interests and actors who wanted to take advantage, and we prevented that from happening. We want to prevent what happened to us from happening now to the young people. They’re trying to use the students as cannon fodder in a plan that began on March 12. A plan of agitation, with demonstrations in the regional seats of the National Electoral Council, in an attempt to discredit the electoral system.

The plan “has an international component with the declarations of the US Undersecretary of State, Roberta Jacobson. They’re trying to use the parliamentary tribune so that they can attack Venezuela from abroad. Now we see deputies of the National Assembly traveling out of country to contribute to that component, which is trying to clear the path for the non-recognition of the electoral process.”

Sánchez revealed that “they talk without batting an eye of producing an event in which the aspirations of the ‘Simón Bolívar Commando’ never come about, so they advance a plan of discredit.”

During a speech in the state of Zulia, which was televised, Capriles said: “A young adult who is now 18 years old grew up with this [Bolivarian] project, and has gone astray because of this project, not through any fault of his mother or his father.”

Sánchez responded: “The one responsible is Henrique Capriles Radonski. In everything the student movement did, during the year 2007, we never saw [the opposition leaders] Julio Borges, Henry Ramos Allup, or Capriles Radonski. It’s really irresponsible, daring to say that we have to contradict the revolution with someone else’s skin.”

I’ve added the links so you can see exactly what’s going on here. This is an old, old tactic of the State Dept., one that hasn’t changed since Dubya tried and failed to derail the Bolivarian project of Hugo Chávez in the noughties of this not-so-“American” century. It’s still trying to use the “student movement” of the Venezuelan opposition (the oligarchy, really) to generate violence, as they did in 2007, when Chavecito was re-elected to his third term. The violence is not the product of “insecurity”, as it is often presented. It is orchestrated and directed all the way from Washington, and its purpose is to derail the Bolivarian Revolution, so that all the good it has done can be undone as quickly as possible.

Of course, there are several things wrong with this plan. Let’s examine them one by one.

Firstly, the Bolivarian Revolution did not begin with Hugo Chávez, it is not limited to him, and it will not die along with him. We are talking here about a liberatory struggle that is no less than 200 years old. Es larga, la lucha. Generations of Venezuelans (and other Latin Americans too) have fought and died defending their country against foreign direction and interference, be it from Spain, from Britain, or from the United States. Their fight did not end when Bolívar died; it had then only just begun. What makes ignorant, ahistorical pipsqueaks like Roberta Jacobson think it’s going to end now that Chávez is physically dead? It didn’t start when he was first elected in 1998, nor when he launched his failed civilian-military uprising in 1992, nor even when he was born in 1954. This revolution began when Simón Bolívar took up his sword against all empires. And by all empires, I really do mean ALL of them…including the sneak-thievish capitalist pillaging made possible by the Monroe Doctrine. Bolívar saw that one coming, too. And generations of Venezuelans have heeded that warning, and taken up the fight again and again. If anyone at the State Dept. thinks they have decapitated a snake and that the path is once again clear for whatever, they are in for a helluva shock. They are in a battle with nothing less than the collective spirits of two centuries of revolution. Good luck fighting against that!

Of course, they’re also dumb enough to think they can appropriate the name of Bolívar, to slap that on their sham of an opposition campaign, and basta. (Jorge Rodríguez made fun of that, and I found it pretty funny myself.) And therein lies another snag. The people of Venezuela are all literate and educated now, thanks to Chavecito’s efforts (and the tremendous support of Fidel Castro, who furnished the teachers). They have become intensely familiar with the reality of what Bolívar strove for, and they aren’t stupid. They won’t be fooled by this transparent bit of crapaganda that Capriles has put on. And apparently he knows it, too; hence the plans for violence.

But here, too, the plan hits a snag. As Nicolás Maduro himself noted the other day, there is no taste for violence among the Bolivarians. He feared a second “Bogotazo” following the death of Chavecito; that never came. Venezuela is not Colombia. History demonstrates as much; the betrayal of Bolívar by Santander prefigures all the profound differences between the two neighbor countries that exist today. Colombia seems condemned to violence as a direct result of that historic curse. Venezuela has taken a different path. Chavecito’s death, while every bit as tragic and untimely as that of Jorge Eliécer Gaitán, has NOT unleashed mass riots and decades of civil war. Nor will it, ever. That’s because, unlike Gaitán, Chavecito had power and time enough to put all the crucial and necessary constitutional changes into place, so that his country would be not only transformed, but able to go on transforming itself without him. And in turn that is because, of the two countries, Venezuela is and has long been the more rebellious. While the one falls easily to every manipulation the gringos devise and has dissolved into violence as a result, the other resists and, oddly enough, remains at peace from within, even despite profound internal changes. Venezuela is ready to take its own reins in hand and rebuild itself; Colombia, if it goes on as it has done up to now, may never get there. In fact, Colombia suffers more with Chávez dead, because he has done more than any of its own politicians, with the honorable exceptions of Piedad Córdoba and Gustavo Petro, to secure peace between the government and the FARC, and to bring about peaceful transformation from within.

But of course, the State Dept. is tone-deaf to all this; its own actions reveal as much. It’s had to let the Venezuelan opposition import right-wing paramilitaries from Colombia in repeated efforts to destabilize Venezuela, all to no avail. The Bolivarians have not fallen to the provocations as expected. They have maintained their composure. Time and again, with and without Chavecito, they have stood their ground peacefully, and laughed as the destabilization plans, one after another, lost their wheels and veered off the road, coming to rest ignominiously in the ditch.

This one is bound to fare no differently. After all, the functional definition of insanity is to keep doing the same thing over and over again, expecting the results to just miraculously change. And yet, the gringos think the Bolivarians are crazy, for repeatedly electing and re-electing a certain brown-skinned working-class campesino from the plains who used to be in the army, and getting good results out of him?

The irony of all this may be lost on the State Dept., but it isn’t lost on me.

This entry was posted in El NarcoPresidente, Fascism Without Swastikas, Huguito Chavecito, Isn't It Ironic?, Isn't That Illegal?, The United States of Amnesia, Under the Name of Spain. Bookmark the permalink.