The ironies of the Venezuelan opposition, part 22 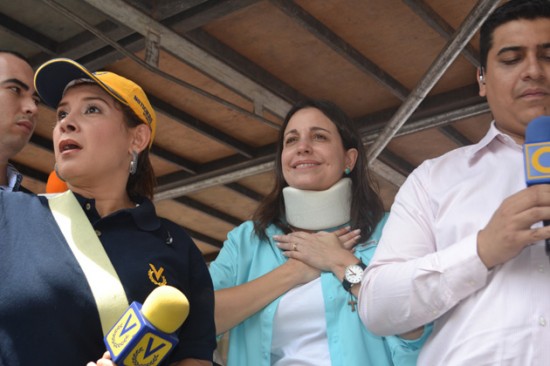 María Corina Machado, Washington’s darling, flanked by the only people in Venezuela who find her even remotely credible: the “reporters” (note the quotes) of oppo crapaganda channels Venevisión and Globovisión, respectively. As a presumptive victim of the brawl in Venezuela’s parliament the other day, it’s a wonder and a miracle that she can even be seen in public with all her injuries. So, tell us, MariCori: where does it REALLY hurt?

In spite of having FOUR fractures to the bridge of her nose, according to her own words, and wearing a collar (obviously around her neck) to “improve” said nasal fractures, María Corina Machado confirmed that she will be travelling to Bogotá on Thursday to meet “with leaders of the opposition”, the president of the Colombian congress, and, obviously, with “journalists”.

The objective of the trip, she says, is “to make visible the situation of Venezuela.”

Note: In the midst of all her “suffering”, María Corina still took the time to put on earrings the same color as her shirt…

One would expect someone with four fractures to the bridge of her nose to be bandaged out to there, and have so much bruising and swelling around the eyes that she could barely see, much less be seen. Yet there she is, looking remarkably well, with tasteful little turquoise earrings and everything. And she’s even going to Colombia today, to show what a horrible country Venezuela is, presumably against doctor’s orders. What a trouper! Perhaps MariCori had a little help from the same makeup wizard at Globomojón who livened up Julio Borges for the cameras? In any event, one doesn’t wear a whiplash collar for a broken nose. If you’re going to make up stories, MariCori, can’t you at least make sure the details match? If you could find earrings to go with your blouse (in that condition!), it shouldn’t be any problem for you.

Oh well. At least one other Venezuelan oppo’s behavior matches his statements…although in ways he clearly hadn’t thought all the way through:

“The lie will always triumph. The good always conquers. We have to take the hatred of a few and convert it into energy to fight more!”

Um, Julio…since when does a lie serve the “good”? And yeah, interesting choice of words there. “The hatred of a few”…that wouldn’t be your side, now, would it? Nahhhhhh, of course not. They’re only the noisy minority who lost the election to a dead man they hated, after all…

And your stage manager doesn’t seem to do any better at keeping things under his hat, either: 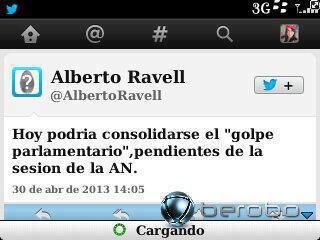 “Today the ‘parlimentary coup’ could come together, watch the National Assembly session.”

Note the date and time. This was tweeted right before all the shit started to hit the fan in the Hemiciclo. It was planned violence, and good ol’ Albertico Federico seems to have seriously believed no one was watching his tweeter for the cues. Only his loyal sycophants, of course.

Meanwhile, Majunche has almost dropped out of sight. But not to worry, he’s still up to his usual tricks. And one of them is blatantly asking for foreign interference in the politics of his own country:

“We will exhaust all internal means, but we are in no doubt that this case will end with the international community,” said presidential ex-candidate Henrique Capriles Radonski, in reference to the elections of April 14, which Nicolás Maduro won with 50.61% of the vote.

During an opposition march on May 1, Workers’ Day, the losing candidate insisted on not recognizing popular will, and attacked the head of state once more as the latter was addressing the revolutionary workers’ march in O’Leary Square in Caracas.

The call for foreign interference as a means of violating the decision of the Venezuelan people has become evident during the past week, as four members of Capriles’s party, Primero Justicia (PJ) promoted the non-recognition of the institutions of the state during a tour of four European lands.

Then, the PJ secretary-general, Tomás Guanipa, accompanied by Edmundo González, a co-ordinating member of the opposition’s international liaison, stated that they had visited Spain, Germany, Belgium and France, where they met with right-wing organizations to solicit their support for non-recognition of the institutions of the Venezuelan state.

In spite of the repeated attempts of the right-wing to discredit the Venezuelan electoral process and the victory of Nicolás Maduro, every country in the world has recognized the results of the elections, except the United States.

If these hopeless bumbling idiots are the best Washington can do for local allies, it’s no wonder the locals are no longer fooled by the show they put on. And they won’t vote for them, either. Even the vaunted “international community” no longer gives a shit for them. Even the spooks couldn’t help them. Just a pity they can no longer rig elections in their favor, like they used to before Chavecito. Ha, ha, ha.

This entry was posted in Fascism Without Swastikas, Huguito Chavecito, Isn't It Ironic?, Isn't That Illegal?, Spooks, The United States of Amnesia. Bookmark the permalink.