The ironies of the Venezuelan opposition, part 40 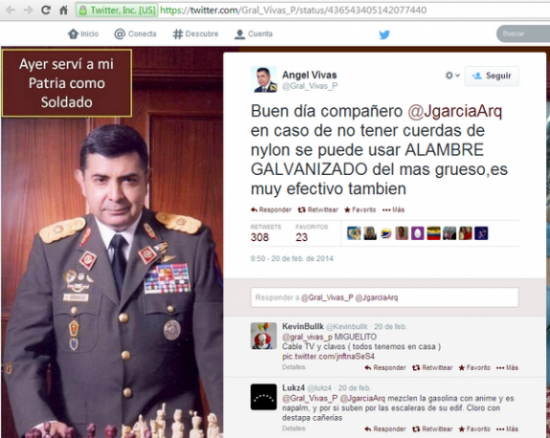 “Good day, comrade @JgarciaArq, if you don’t have any nylon ropes you can use GALVANIZED WIRE of the thickest kind, it’s very effective as well.” Ladies and gentlemen, Venezuelan ex-general Ángel Vivas, giving free advice to the yoots on how to murder innocent motorcyclists in Caracas. The sign above his head says “Yesterday I served my Homeland as a Soldier”. He’ll be here all week. Try the chicken, and don’t forget to tip your server.

Howdy, folks, and welcome to a landmark edition of VenOpIronía. We’ve got a lot of ground to cover tonight, so let’s get on it. First stop: Caracas, where this happened: 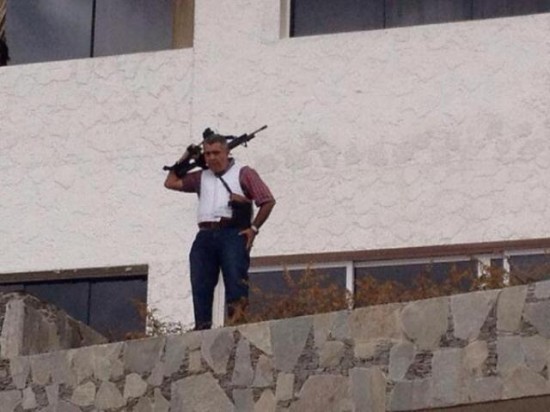 Yup, that’s General Vivas, he of the noxious tweeting habits. He’s in his civvies, and holding a ludicrous standoff in a very fancy neighborhood. And he’s got blood on his hands, which may be why he’s posturing like a macho madman, instead of handing himself over to the authorities like a decent human being:

The president of Venezuela, Nicolás Maduro, called for an investigation of retired army general Ángel Vivas, for instigating violence and ordering [opposition demonstrators] to string up nylon ropes and wires during their guarimbas, causing the deaths of at least two people.

On Friday night, Santiago Enrique Pedroza, 29, died trying to pass a barricade, when he was caught by a taut wire which he could not see, on Rómulo Gallegos Avenue in Caracas, and was strangled to death. In the western state of Mérida, a woman died of the same causes.

Maduro said that the Caracas case had to do with a young man who worked in a supermarket, was a sports leader in his neighborhood, and a Chavista who had celebrated his birthday just the day before. “We have already identified who strung the wire. They will go to jail,” he said.

Here’s another view of the ex-general, making like Charlton Heston: 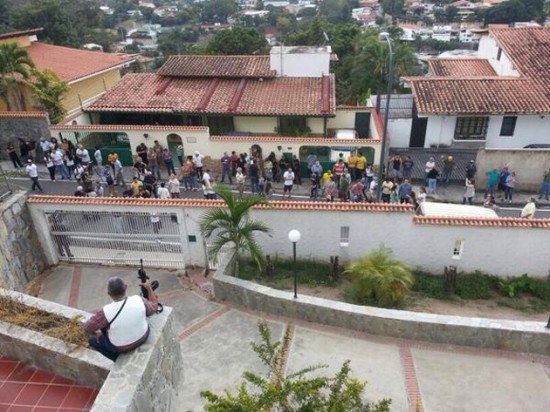 As you can see, he’s drawn a small crowd. Which is par for the course with the Venezuelan oppos, although they do make a touching effort to pretend otherwise. Sorry, guys, but there is just no such thing as a popular oligarch in Venezuela!

Meanwhile, not to be outdone by the recent arrest of Prettyboy Leo and the not-yet-arrest of ex-general Vivas, Maricori has piped up again…and is calling for moar dirty war:

On Sunday night, audio was revealed of opposition deputy María Corina Machado on the Zello social network, divulging instructions for “participating in civil disobedience and active guarimbas, so that all Venezuela’s streets would be closed on Monday.”

The audio was broadcast by Mario Silva on his program, La Hojilla (The Razorblade).

There, one could hear Machado say: “Gentlemen, I repeat: This is not the time to fold your arms. This is not the time to go to the beach, it’s not the time to enjoy the weekend. This is the time to show the government who we are, and why we’re fighting. There are brothers laying it all on the line for Táchira, there are brothers who gave their lives in the last few days for us. We have to avenge them, gentlemen. We have to show their mothers that their sons’ struggle was not in vain. We have to participate in civil disobedience and active guarimba, so that on Monday morning, all the streets of Venezuela are closed, please. I invite everyone to participate in active struggle.”

Translation mine. Audio link added, so you can hear her actually say that.

Of course, MariCori and her fellow putschists had to be disappointed. Not only was their plan for a “Great National Barricade” leaked, it also flopped. All the cities they planned to cut off, including Caracas, stayed glaringly open. Galvanized wires, nylon ropes, and gun-mad ex-generals notwithstanding.

Guess too many of those “peaceful” little putschists were off at the beach, eh MariCori?

1 Response to The ironies of the Venezuelan opposition, part 40