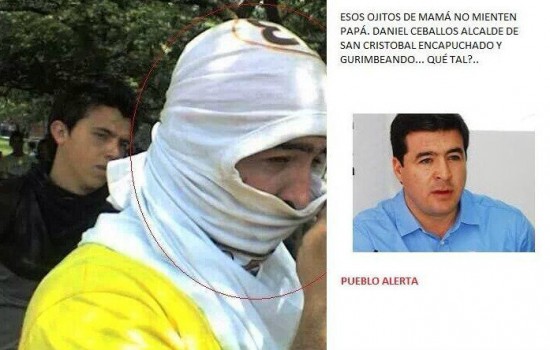 Well, well. What have we here? Oh, none other than the catch of the day, hooded like any fine young fascist thuggie of the Venezuelan streets. And now he’s in custody, finally:

The Venezuelan minister of the Interior, Justice and Peace, Miguel Rodríguez Torres, reported on Wednesday night that the First Control Tribunal had ordered the capture of Daniel Ceballos, the mayor of San Cristóbal, in the state of Táchira. He has now been captured by the Bolivarian Intelligence Service (SEBIN).

Rodríguez also announced on Wednesday night that another National Guard officer had been killed in the same city, as a result of violent actions on the part of the Venezuelan right-wing.

Daniel Ceballos, you may recall from an earlier post of mine, learned some of his odious tradecraft from the Mexican drug gangs. And now he’s met the same fate they all should.

PS: Oh joy, the MUD has squeaked up, calling Ceballos’ arrest “vile” and a “violation of human rights”. I guess they haven’t seen the dummies he ordered his goons to hang from trees to intimidate any local Chavistas. Or, hell…the photo above, in which he’s got his shirt yoinked up over his head in a failed effort to disguise his rather distinctive features.