“Not All Men” is still too many 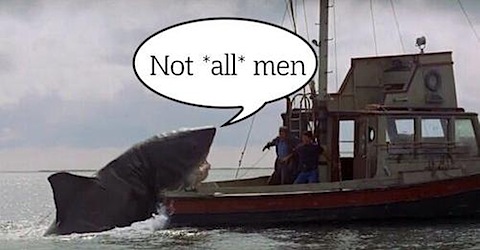 Not all men are like Elliot Rodger, the 22-year-old who stabbed three roommates to death before going out on a shooting spree motivated by an unholy cocktail of misogyny, mental illness, and frustration at his “incel” status and his failure at picking up women.

Not all men are like this bunch of hooligans, who took potshots at some young women just for not having sex with them.

Not all men are like Marc Lépine, who went on an antifeminist crusade with a Ruger, killing 14 women and wounding several other people.

Not all men are like the boys who harassed me on an almost daily basis when I was between the ages of 12 and 17 — the same ages which, according to Julie Lalonde, demarcate the age bracket in which the greatest number of males will commit sexual assault.

Not all men are like the older man who rudely propositioned me behind the wheel of his car when I was 20, grabbing my hand and sticking my finger in his mouth and telling me he wished it were my nipple.

Not all men are like the young guy who pulled up to the curb next to me in Toronto and tried to get me into his car, thinking I was for sale just because I was female and walking alone.

Not all men are harassers, rapists, murderers or creeps. But tell that to any woman who’s ever had a too-close encounter with one of them. “Not all men” is cold comfort to an awful lot of women.

“Not all men” is no comfort to me. I still have trust problems thanks to all those guys who made my life a shitpile over the course of my formative years.

“Not all men” is no comfort to one who was a student, and volunteering at the Queen’s Women’s Centre, when the Montréal Massacre went down. I remember how so many of the victims were in exactly my own age bracket then, too. It’s no comfort to me, because I went to school — and the Women’s Centre — terrified that I could have been next. And if not me, then maybe some other young woman I knew.

No, of course not all men are like that. Not even a majority are. At least I hope so. But I honestly don’t know. I’m not the one to tell, because I have run into way too many who were like that.

“Not all men” still covers an awful lot of men.

“Not all men” is still just too damn many, because NO man should be like that.

This entry was posted in If You REALLY Care, Just Pissed Off, Men Who Just Don't Get It, Sick Frickin' Bastards, Uppity Wimmin. Bookmark the permalink.