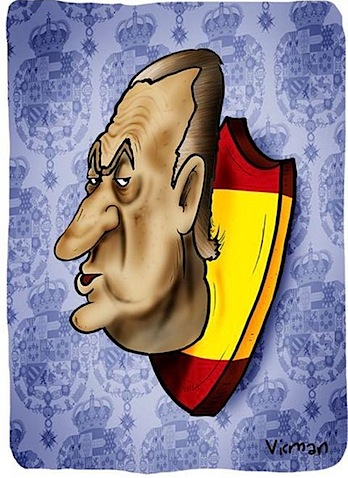 Oh, oh. “Uneasy lies the head that wears the crown” has never been more true in Spain than today, as yet another inconvenient truth (for the monarchy, anyhow) comes to light:

62 percent of Spaniards support a proposed referendum of monarchy versus republic, following the abdication of the king, according to a survey by Metroscopia, released today.

The survey, the first of its kind following the abdication announced by King Juan Carlos on June 2, found that only 34 percent are against the popular consultation, and 4 percent are indifferent.

The proposal is supported by broad sectors of the political scene and the citizenry, who from the moment they learned of the monarch’s decision have been taking to the streets, demanding the right to decide which type of state the Spaniards want.

The monarchy, however, has the support of the right-wing Popular Party (PP) and the Spanish Socialist Workers’ Party (PSOE), who together have more than 80% of the votes in the Congress of Deputies, where the decision over the succession and referendum will take place.

Republican politicians and analysts believe that the surprising abdication was decided after the Europarliament elections of May 25, when the PP and PSOE, supporters of the monarchy, suffered a significant loss of votes.

If the tendency of the European elections translates to the Spanish general elections of 2015, PP and PSOE will not obtain even 50% of the congress, making the process of monarchic succession, which must be evaluated by the Spanish parliament, much more complicated.

According to the Metroscopia survey, the referendum proposal enjoys particular support among young Spaniards, ages 18 to 34, at 74%, but with PSOE voters as well — 68% of them saying they support the consultation.

The PSOE leadership, though admitting that their party has republican roots, supports monarchic succession with the argument that its existence was one of the agreements for the transition from the dictatorship of Francisco Franco (1939-75) to democracy.

The greatest agreement with the leadership of their party comes from the voters of the United Left (IU), 86% of whom support the referendum, and the PP, 60% of whom are opposed.

On June 11, the Congress of Deputies is slated to approve the law of abdication and succession in favor of Felipe, son of Juan Carlos, a date also slated for demonstrations in favor of a referendum throughout the land.

And STILL the mainstream media aren’t covering this rather momentous story. Well, maybe they’ll cover the riots that are sure to follow when Spaniards take to the streets protesting their “new” monarch, and the police take to repressing them as they did during the demonstrations of the indignados during the budgetary crisis. Expect a lot of stupid-playing and “who could have expected?”s. Gonna be one helluva shitshow, kiddies…

PS: Oh, this is too lulzy. His Royal Twitness sez he abdicated so Felipe wouldn’t “wither like Prince Charles” waiting for his crack at the throne. Looks like he may do so anyway, if 62% of Spaniards don’t want him!

This entry was posted in EuroPeons, Under the Name of Spain. Bookmark the permalink.