Wankers of the Week: Raise the Franklin!

Crappy weekend, everyone! Well, how about them apples — Stephen Fucking Harper has Columbussed the Franklin expedition! While our nation’s historical archives are being gutted and trashed and burned, there ain’t nothin’ like a heart-warming photo op to prove that Harpo is the Greatest Guardian of History in the History of Ever. So, to celebrate, let’s raise the Erebus and the Terror, and then keelhaul him…along with all these other history-makers:

1. John Fucking Trumbo. Once more, with feeling: The Founding Fathers weren’t fundamentalists. They were Deists. They were largely irreligious. And they were more than specific about NOT requiring public prayers, much less ones directed at any given god. And if the US constitution isn’t proof enough of that, there is always the Treaty of Tripoli, Article 11.

2. Pat Fucking Robertson. Patwa wants an 80-year-old fan to get a job so those tithes keep rollin’ in. Item: Patwa is over 80 himself. And if he needs the money so badly, shouldn’t HE get a job, too? Not that he’s terribly qualified; Patwa seriously believes that it’s all those “girl on girl” movies that turn people gay!

3 and 4. Jon Fucking Ohlman and Cody Fucking Hudson. Need another reason not to shop at WallyWorld? Okay, how about some deer pee…brought to you by yet two more fine, tacky People of Wal-Mart?

5. Brian Fucking Kilmeade. Women who get punched out in elevators should “learn to take the stairs”? Well, by that token, dudes whose own faces invite punches should learn to keep their big mouths shut.

6. Karen Marie Fucking Dilworth. And because it wouldn’t be a wankapedia without a real, live wanker, heeeeeere’s Florida Woman!

7. Andrea Fucking Tantaros. Since when is it Barack Obama’s job to police the NFL? Shouldn’t that be, I dunno, the NFL’s job? But, uh, since you asked, yes, he’s come out with a statement condemning violence against women…again. Now, how about YOU do the same, instead of going on pretending that misogyny isn’t a real and constant problem?

8. Will Fucking Hayden, AGAIN. For raping a 12-year-old…AGAIN.

9. Chris Fucking Heben. Christ, what is it with right-wing gunhuggers and racism…and lies? This one invented three black dudes and a car out of thin air. Still doesn’t explain how he got shot in the stomach. You don’t suppose it could have anything to do with drumming up publicity…and sales of his overpriced idiot shirts…do you?

10. Mark Fucking Driscoll. Yes, Hipster Pastor is in the news again. This time, over something he wrote long ago, on a forum, under a silly pseudonym. And why not? If you call women “penis homes” and insist that men’s dicks are on loan from God, don’t you deserve all the ridicule you can get?

11. Rob Fucking Ford. The RoFoShitShow continues, with a possibly-drunken presser. And questions about his health. And a former associate’s tell-all book, which may or may not be out in time for the municipal elections. And with the company he keeps. Such as… 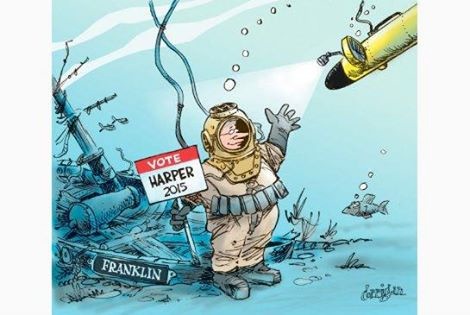 13. Phil Fucking Robertson. No, AIDS is NOT a punishment from God for being gay. The first victims were definitely heterosexual, and in Africa, where the disease originated, the majority still are. Haven’t we been over this before? Why yes, we have — 30 fucking years ago. How nice to see that some people are still just as willfully stupid today as they were back then.

14 and 15. Kory Fucking Watkins and Janie Fucking Lucero. Remember the meme-guy who thought it his job to patrol the drugstore with an assault rifle, keeping the foot powder safe from the dental floss, and vice versa? Well, his wife’s just as dumb. Along with several other gunsuckers, they’ve been busted for harassing the cops in Texas. With all this open-carry shit going on, it’s getting harder to tell the vigilantes from the robbers, innit?

16. Greg Fucking Abbott. The Civil Rights Act of 1964 was meant to abolish all impediments to equal voting rights. So why is the fucking attorney-general of Texas violating it by calling out an armed raid on a voter registration drive? Oh, probably because he’s also currently running for governor…and very likely to lose.

17. Dustin Fucking Siggins. And speaking of losers, there’s this troll…who is busy slamming and slut-shaming the woman to whom #16 is slated to lose. Desperate times… 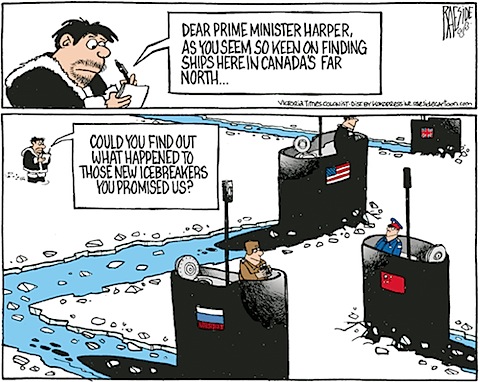 18. Sarah Fucking Palin. Meanwhile, in Alaska, Screech and Tawd and their brood of oddly-named juvenile delinquents got into a dust-up at a local redneck shindig. Just keepin’ it classy!

19. William T. Fucking Price. And speaking of classy, check out his victim-blaming interpretation of the Ray Rice elevator punch-out kerfuffle. Apparently, WTF Price knows all the reasons why women stay with and even marry their abusers, and it all boils down to Alpha Male Shit.

20. Ted Fucking Robinson. Aaaaand MOAR classy victim-blaming. Well, at least this one will get a longer suspension for it than Ray Rice did.

21. A. J. Fucking Delgado. Aaaaaaaaand even MOAR classy victim-blaming! Good gawd, how pathetic is it when a FUX Snooze guest makes Baby Jeebus Hannity look like the more reasonable and empathetic one? This one is so appallingly dumb that she actually thinks Janay Palmer “knocked herself out”. Yes, in those words. Stop punching yourselves in the face, battered women! Stop victimizing the poor menz!

22. Steven Fucking Gillard. I met so many guys like this one at j-school. All of them too happy to swallow right-wing stink-tank emissions holus-bolus, and all of them too happy to ignore all issues surrounding their own privilege. And all of them, naturally, quite insufferable when they got to ranting. And that’s the saddest part, because they were otherwise seemingly nice, friendly guys. Tellingly, none of them are still my friends.

23. Tamara Fucking Holder. And again, an idiotess on FUX Snooze who makes Baby Jeebus look good by comparison, saying what-about-teh-menz. Yeah. Because it takes balls to hit a woman in an elevator, of course.

24. Ray Fucking Fournier. If working in the public school system is so terrible, I’m sure you’ll do just great out of it. Let someone do the job who CAN do it.

25. John Fucking Osborne. And that goes ditto for you. 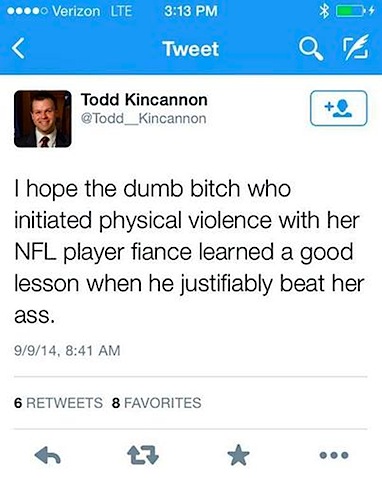 That’s why. If anyone ever smashes HIS face in because of something stupid he said to provoke it, I’ll be sure to rub his nose in it. If it’s not already broken, that is.

27. Ted Fucking Cruz. Used to be you could get cheap and easy applause by making noises in support of Israel at a right-wing speechy thingie. Even if you were a complete idiot. Looks like a shark has been jumped here, because Ted got booed. And no, Canada still doesn’t want him back!

28. David Anthony Fucking Wiggins. Dude, you sure have a strange idea of “equality”. Perhaps you wouldn’t mind, then, if a woman gave YOU some? Also, cops beating up men ≠ domestic violence. Words, they mean things. Learn the meanings of the words before you use them.

29. Ronald Fucking Richie. Oh, NOW he walks it back? Thanks to this man, an innocent man trying to buy a BB gun was killed by police. He straight-up lied that the dead man was loading it and “pointing it at people”. AND he was kicked out of the Marines for “fraudulent enlistment”. Sounds like this guy’s got nothing going for him but his gift for fraud. But hey, he’s white. The dead guy is black. So, I guess that makes it all okay.

30. Ben Fucking Carson. You’re “not sure” that domestic violence is a big deal? Ben, kindly come out of that bubble NOW, please. We need the plastic. 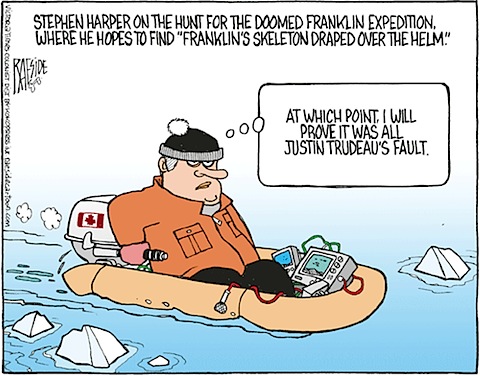 31. Robert Fucking Pittenger. Maybe firing gay people is a “freedom” YOU enjoy, but where I come from, it’s a violation of their basic human rights. Shame on you, you disgusting excuse for a bastard.

32. Roger Fucking Goodell. The only thing that lies worse than an NFL commissioner is a cheap rug. (Oops. I think I just insulted cheap rugs there.)

33. Doug Fucking Ford. Well, this was a foregone conclusion. Ford’s Law still holds: Whatever this family of fuck-ups can fuck up, they damn well will. So, since Tweedledum is now out of the running for the mayoralty, onaccounta health problems, Tweedledee is stepping in. And Tweedledee’s constituents are, shall we say, UNDERWHELMED. Yup, gotta love that RoFoShitShow…the whole family gets in it up to their drug-dealing eyeballs. PS: Well, well, well. What have we here? A backup plan already in place as early as May? Yup, this is smelling more and more like a set-up all the time. 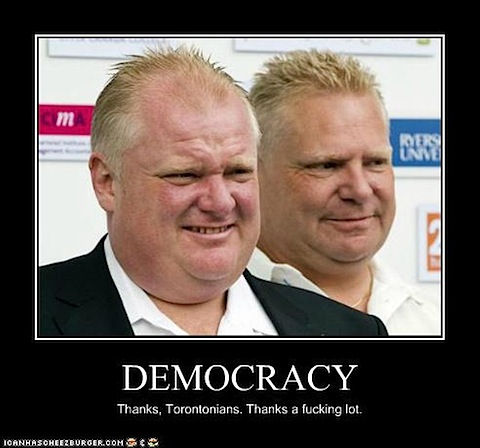 34. George Fucking Zimmerman. Why is this psychopath still trusted with a penis compensator — er, gun? Why why why WHY???

35. Rush Fucking Limbaugh. Why is this fucking pigman still stinking up the radio airwaves? Why why why WHY??? 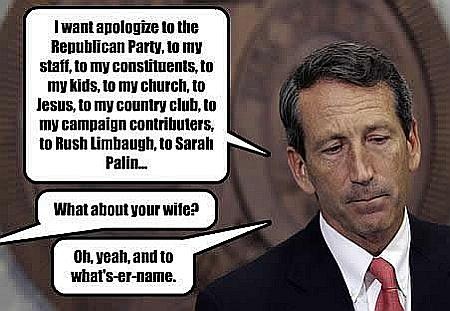 37. Russell Fucking Pearce. What to do about poverty? Hey, this guy knows: Sterilize all the women! Never mind the dudes…just the women. Never even mention the prospect of a vasectomy, because men gotta spread their seed around. Apparently, balls are sacred. But ovaries and uteri? On the chopping block with ’em! Because it’s always a woman who’s to blame for everything.

38. Chuck Fucking Woolery. Oh noes, the Muslims are coming to your town! Um, Chuckles? The Muslims are here already. In MY town. Have been for decades. And they haven’t done anything wrong. Not so much as a jaywalking ticket! Explain THAT to me. Oh wait, you can’t. You’re just some jackass who hosts a boring old game show. Shut up and sing, Chuckles!

39. George Fucking Visnich. Laying off a cancer-stricken employee is the “humanitarian” thing to do? Um, since when? Oh yeah, that’s right: Since it cuts her off from those expensive but potentially life-saving employee benefits like insurance and sick days. Capitalism: saving lives right and left! 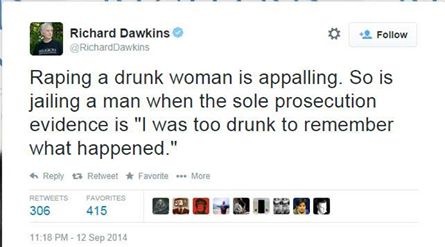 That’s why. Apparently, like Cee Lo Fucking Green, Dickie thinks that if she can’t remember, it’s not really rape. And that her incapacitation means the dude should be let off so he can do it God knows how many times again, with impunity.

And finally, to the fucking NFL. Yes, all of it. Because the pro football league is all too happy to exploit women, and won’t lift a finger to help them when they are abused. That much is clear whenever Super Bowl season rolls around, and domestic abuse incidents suddenly spike. And when “valuable” players get less of a suspension for cold-cocking their fiancées than for pot possession. And when other “valuable” players get away with rape. And when team owners can get away with sexual assault, repeatedly, because they own a fucking football team. As long as that system remains unquestioned, it remains unchallenged and unchanged. And as Keith Olbermann so righteously pointed out, that makes everyone involved complicit and guilty. All of them must go. (And Ray Rice’s fucked-up fanbase, too.)

This entry was posted in W is for Weak (and Stupid). Bookmark the permalink.