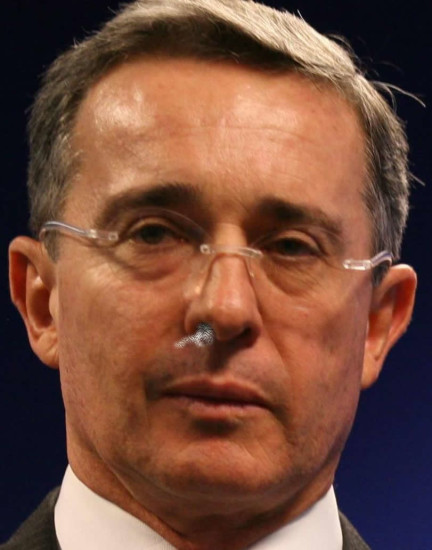 Are you all fired up for the New Year, kiddies? I sure am. Especially since I know that someone is going to be facing the music and dancing then…on hot coals, natch:

The information is surfacing and the circle is narrowing: Álvaro Uribe Vélez, president of Colombia from 2002 to 2010, is the subject of an investigation by the International Criminal Court in The Hague, as a possible author of crimes against humanity.

Everything indicates that Uribe will be charged with being mastermind and organizer of actions which have caused a number yet to be determined of murders of peasants and political opponents, actions perpetrated by paramilitary groups, members of the Colombian army, and agents of state security. In fact, he who was head of the secret services under the rule of Uribe, Jorge Noguera, who was jailed last year and tried in Bogotá for various crimes, has been accused as well of having organized the assassinations of various opposition politicians.

Uribe is also under investigation for having organized an armed gang which carried out “clean-up jobs” on his own cattle ranches.

Among the crimes which The Hague is investigating are the so-called “false positives”, referring to murders of peasants accused without proof of being members of the FARC, whose deaths were presented as if they were those of “enemies” killed in combat. In an attempt to justify these crimes, Uribe declared on various occasions that the “false positives” were “isolated cases”; that is, few and the product of errors.

Against that excuse, the facts at the hands of the International Criminal Court indicate that the deaths caused “by mistake” in the so-called “isolated cases” add up to more than 3,000. This number, which is not yet definitive, is based on the information supplied by, among other sources, the authorities of that self-same South American country, including the Commission of Peace of the Congress of Colombia.

The investigators consider that the paramilitary actions and some of those carried out by the armed forces and state security were part of a political plan of institutional character organized at the uppermost echelons of the government.

With the intent of mocking justice, the ex-president tried to set in motion a political force called the “Pure Democratic Centre”, in order to head up a political campaign for the next senatorial elections, since if elected, he could mock (or at least try to) the actions of the International Criminal Court.

3,000 “false positives” is more victims than died on September 11, 2001, for those who are keeping track of such things. So yeah, that makes El Narco worse than any terrorist. And bear in mind that the full death count isn’t even in yet. It could go a lot higher.

Something tells me that he won’t be thumbing that coke-smeared nose of his at international justice for very much longer, though, since he’s hugely UNpopular in his homeland. As befits a civil-war criminal, naturally.

This entry was posted in El NarcoPresidente, Fascism Without Swastikas, Isn't That Illegal?, Law-Law Land. Bookmark the permalink.