Wankers of the Week: It’s Wack Friday, ya bastards!

Crappy weekend, everyone! And a happy Wanksgiving Weekend to our friends south of the 49th Parallel. Between the Turducken and the Piecaken AND the Wack Friday madness, it’s a wonder you people can still walk. My hat’s off to all of you, truly. And now, with no further ado and in no particular order, our roll call for the week:

1. Rush Fucking Limbaugh. Because it’s been awhile since I’ve listed the Pigman, let’s just give him the top spot here. And why not? When you’re an “I’m not a bigot/racist/xenophobe” bigot/racist/xenophobe, you’ve earned it. Special bonus for claiming that some of his best friends are Syrians, too. Yeah, I’m sure they are. And I’m sure they don’t hear the bigotry, racism and xenophobia he spouts, either. Hey, he doesn’t. Remember, his hearing got eaten by all the drugs he’s done!

2. Ezra Fucking Levant. And how about our lesser northern Pigman, folks? He’s mad at the French for not getting all islamophobic and gun-mad, even though he did try to whip them up a bit. Even sweeter, he’s now living under an NDP government in Alberta, a Liberal PM named Trudeau in Ottawa, and a carbon tax that makes all his Schmethical Oil crapaganda look like a clown show. Which, of course, it was.

3. Ben Fucking Carson. And speaking of clown shows, the Idiot Savant of Neurosurgery has claimed that he “saw film” of American Muslims cheering 9-11. Uh, WHAT FUCKING FILM?

4. Donald Fucking Trump. Not to be outdone, The Donald also claims he saw Muslims in the streets of New Jersey, cheering when the Twin Towers fell. Only, of course, that never happened, either. Seems that he and Ben are engaging in a bit of folie à deux, eh? PS: Nice Nazism you got there, Herr Trump. PPS: I have lost the ability to even. PPPS: And if anyone else needs proof of his unfitness for office, how about this? Or this? Or this?

5. Rick Fucking Santorum. Ah, Buttsploodge. It’s been awhile for you, too, hasn’t it? Let’s not let a few nasty-wasty facts get in the way of our poopy frothing, shall we?

6. Marco Fucking Rubio. Figures that this shameless opportunist would think the Paris terror attacks were a great thing for his campaign. When you lack substance and smarts, scare tactics are just like candy from heaven, eh? PS: And also this. Religion excuses everything, including stupidity, eh?

7. Kevin Fucking Swanson. If God wants to annihilate entire countries and has the power to do so, why the hell doesn’t She just get on with it already? Maybe because this hateful preacher, sack of shit though he is, isn’t worth wiping out the rest of a perfectly salvageable country just to get rid of his sorry ass. That’s probably it, isn’t it?

9. Robert Fucking Kiger. No, you wouldn’t get beaten up in a black church just for sticking your big, dumb, white face in. If you got beaten up, it would be for shooting off your racist mouth. Most likely, though, you’d probably just get escorted unceremoniously out of there.

10. Phyllis Fucking Schlafly. Earth to Phyllis: More Mexicans are now leaving the US than flocking to it. Also, why are you not dead yet, you horrid anachronistic fossil?

11. Sarah Fucking Palin. Yup, Mama Grizzly wanked again this week. And this time, it was by being shocked that there is actually already a process in place for the US to screen refugees! Shocking, I know. And there goes yet ANOTHER stupid ‘winger talking point. At this rate, they’ll have none left by the time the next election rolls around. An election in which, I hereby note, the Paliness isn’t standing for anything anyway.

12. Suzanne Fucking Atanus. Crikey! Another bad penny comes back to haunt the Repugs. I wonder if she has any idea that in Canada, same-sex marriage has been legal for a decade, and we have fewer tornadoes than the gay-hating red states.

13. Sam Fucking Harris. Awww. Is somebody bitter because Noam Chomsky whupped his widdle ass in a debate? Yes, he is! Diddums.

14. Robert Fucking Couture. Since when do Catholics have “prayer teams”? Isn’t that a fundie thing? And since when do priests of the Catholic church get to pimp them out for profits, and use the proceeds — from FUNERALS, no less — to break their vow of poverty?

16. Richard Fucking Dawkins. And in other “surprise” news, Dickie’s butthurt that (a) a Muslim kid really did build his own digital clock, and (b) said kid is now suing the people who put him in handcuffs and interrogation. I think the real reason for his butthurt is that deep down, he knows that Muslims were doing science while his ancestors were all dying of plague and superstition in the Dark Ages. And it’s eating him alive.

17. Scott Fucking Adams. Meanwhile, a once-mildly-funny office-drone cartoonist has taken it into his swelled head that since his crap sells well, he is actually a suuuuuper-genius. And is now using that to push the idea that women owe men sex, or else men will blow shit up — and that men who think like this are somehow “normal”! Somebody please inform him that the men of Daesh are sexually enslaving women and still blowing shit up. And murdering the cute young girls they’re sexually abusing, too. Oops! There goes another dumbfuck suuuuuper-genius theory. PS: Also, Donald Trump being president? HAHAHAHAHAHA. Dream on, little man.

18. Jonathan Fucking Koppenhaver. And speaking of males resorting to violence over sex, how about this one? Yup, he’s one entitled fucker, all right. And he sure has some fucked-up ideas as to what “love” means. But he’s hardly the only one, and that’s to be expected in a culture where everything is commodified. Including women. Right down to their last orifice.

19. David Fucking Wright the Fucking Third. Why the double Fucking? Because that’s how stupid he is to be tying his dick in knots over how “Sharia law” is going to take over the US when, in fact, it’s Orwellian McCarthyites like him who are the biggest terrorist menace of all. PS: He can dish it out, but he can’t take it? Boo fucking hoo! 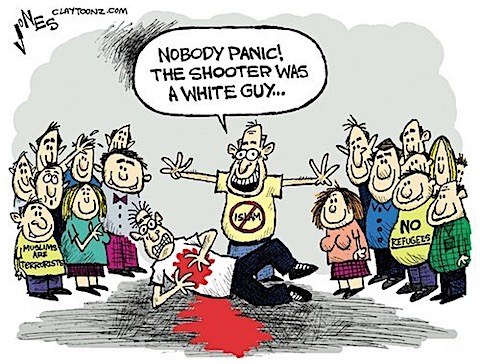 20 and 21. This guy’s fucking parents. You have adult offspring, and you’re acting like you never graduated middle school. Grow the fuck up, you two!

22. Wayne Fucking Hazzard. Atheists are like Daesh? Um, Pot…go look in the mirror before you go lobbing slurs at Kettle, kthxbai.

24. Benzi Fucking Gopstein. And just so you know that nobody has a monopoly on religiously motivated terrorism, there’s this guy. Pride of Apartheid Israel, represent!

25. Shmuley Fucking Boteach. No, you are NOT “America’s Rabbi”. You’re nothing more than Sheldon Adelson’s fawning yes-man. And you really have no business taking out ads anywhere trying to tell John Kerry how to do his job when you don’t even rightly know what your own entails. I respectfully suggest you begin by removing your head from your tokhes.

26. Bo Fucking Dietl. When you don’t know diddly about whom to blame for what, just blame Obama. That’s all Bo knows…

27. Mike Fucking Jolley. He spent $500 on an ugly, plagiarized sign to advertise — proudly — that his is a monocultural community of bigots. And then they proved just how bigoted their whole town is by crowdfunding his hate-sign. Gettin’ real tired of this “politically incorrect” shit, y’all.

28. Marine Fucking Le Pen. Keep your nose out of our politics, you fascist swinebag. And go suck face with Daesh’s leadership.

29. Frank Fucking Pavone. Oh joy! Just as an anti-choice gunman shoots up yet another clinic (in Colorado), this asshole just has to pipe up about the need to exploit the stigma of a procedure that he, an old presumably-celibate man (and probably a closeted one) will never need to get for himself.

30. Ted Fucking Cruz. When even kindergarteners have a better understanding of climate science than you, it’s a sign that you need to get the fuck out of the presidential race and let the intelligent grownups talk, sonnyboy.

And finally, to the fucking Erdogan mafia family of Turkey. Yup, they’re all MASSIVE wankers…not only for ordering the illegal shootdown of a Russian plane over Syria, but also for objectively and materially supporting Daesh. When a US general comes out in favor of kicking Turkey out of NATO, you just know that something is rotten in Ankara. And it’s not just the head of state, but his son who’s profiting — obscenely — from the terror mafia that’s oppressing Syria and Iraq, and holding Europe hostage to boot. Ordinary Turks are not happy with the situation, and who can blame them? Time to oust this motherfucker and ban his entire party from power, permanently.