Wankers of the Week: Drumpfed!

Crappy weekend, everyone! And a buttload of congratulations to the lovely, windy city of Chicago, whose wide-awake citizenry blew away the biggest gasbag in present-day US politics in a massive show of sense and solidarity. Good job, Chicago, and more power to you. And lots, lots less power to these wankers, in no particular order:

1. Donald Fucking Drumpf, Jr. Yes, that’s right, the little buffalo chip off the ol’ block-o-shit is back on the list this week. Why? Because he retweeted lies and slander spread by a known white supremacist who really should get his own tweeting rights revoked as well. Both of them are a dead waste of oxygen, and neither one deserves any platform on the Internets. PS: Ha, ha!

2. Theodore Fucking Beale. Yes, that’s right, “Vox Day”, failed science fiction writer, the piece of shit whom Drumpf the Younger retweeted. He’s the racist fuck who tried to get an innocent Bernie Sanders supporter blamed for the disgraceful display of a real fascist Drumpfite. Time to pull his tweeter plug once and for all, yes?

3. Megyn Fucking Kelly. No, nobody’s “free speech rights have been shut down”. What you saw in Chicago was actual freedom of speech, trumping (pun fully intended) fascism. But since you clearly don’t understand how these things work, maybe a nice, simple stick drawing is in order:

4. Birgitt Fucking Peterson. Guess what? The Nazi-salute granny is NOT a Bernie supporter, as Wankers #1 and 2 have claimed. She’s one of their own! And get this: She claims Der Drumpf’s opponents don’t know what Nazism is? Sez she’s seen the real thing with her own eyes? I call BULLSHIT. She was actually born a year too late to have seen any real, first-time-round Nazis with her own eyes, much less remember them. But I will give her one small point: Yes, the Repug party most certainly does need to be broken up. It attracts nothing but the dimmest of the dim anymore. Including, as it happens, the likes of her.

5. Jeanine Fucking Pirro. What diploma mill graduated you, “Judge” Pirro? If you don’t understand the common definition of “taking responsibility”, you clearly don’t understand the legal one, either. Or, for that matter, what the First Amendment actually says. (Hint: It doesn’t cover fighting words.)

6. Donald Fucking Drumpf. How considerate of Der Drumpf to warn us in advance of his plans to be a war preznit. And that he plans to restart the Mexican-American War all over again, completely forgetting how many Latin Americans (some of whom have been promised US citizenship in exchange for their service!) are in the troops of the current, unrejuvenated US army. Reason enough not to vote for him, ¿verdad? PS: Someone grab the fire extinguisher, I smell smoke coming from his pants. PPS: Hey ladies, what say YOU treat HIM like shit, this time ‘round? PPPS: And it looks like even the disgrace that is Pete Rose considers Der Drumpf to be political cholera. Ha, ha.

7. Mark Fucking Burns. No, Bernie Sanders doesn’t need to meet Jesus. But it seems that you probably do.

8. Dan Fucking Seum. When your schtick is stopping “government intrusion”, you’d best get the hell out of politics altogether. Otherwise, you end up telling rape victims that their suffering and need for justice is less important than the rights of criminals to go on getting away with it.

9. Marc Fucking Thiessen. Nice to see that Der Drumpf is getting love from BushCo, eh? And here we thought that era in US politics was dead and gone. Nope! It’s being resurrected by an idiot with a waterboard. Lovely!

10. Joel Fucking Pollak. Need more proof that Breitbart is not a real news site? Get a load of how they treat their so-called reporters. Apparently it’s more important to uphold Der Drumpf’s reputation than it is to keep his goons from manhandling a sympathatic journo who only came to ask a few lousy questions! PS: Aaaaand BOOM. Ha, ha. PPS: Well, well. Look who’s a suck-up to Der Drumpf! Guess this explains it all, eh?

11. Sarah Fucking Palin. Oh look, Moosolini is screeching and projecting again. Does this idiotess have any sober moments anymore? At ALL?

12. Joel Fucking Osteen. Thanks for reminding us why you don’t deserve any more of anyone’s money. And why it’s high time preachers from megachurches were taxed at the same rate as all the other multimillionaires. And also why the old progressive taxation system needs to make a comeback!

13. Glenn Fucking Beck. If God has been preparing for the election of Ted Fucking Cruz for the last ten years, wouldn’t one think She could pressure someone to loosen the requirement that a US presidential candidate be, you know, native-born?

14. Corey Fucking Lewandowski. Would it surprise you greatly to learn that Der Drumpf’s campaign manager is almost as big an asshole as he is? No? Me neither.

15. Jerry Fucking Falwell, Jr. Der Drumpf is like King David? Well, if you’re talking about the guy who had another guy whacked by a mafia so he could steal the poor bastard’s wife, yeah, that sounds totally in character for him.

16. Owen Fucking Labrie. Bro, please. You think your life has been “torn apart in the media”? You ain’t seen nothin’ yet. Especially since the justice system isn’t finished with you.

19. Carlo Maria Fucking Viganò. Well, now we know who invited Kim Fucking Davis, the slacker clerk, to the papal appearance in Washington. And now we know who’s fired. Arrivederci! And a big fat Vaffanculo to you, too. Don’t let the door hit you…no, actually, please do! 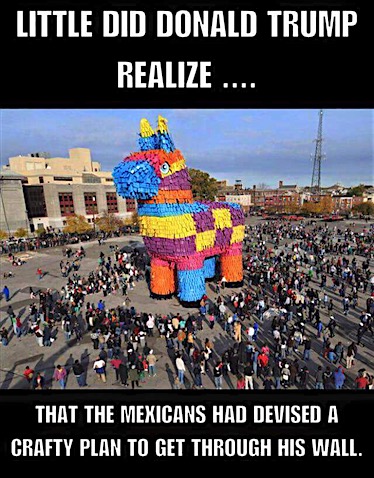 20. Craig Fucking Rowland. So, rape kits are unimportant because, and I quote, “the majority of our rapes that are called in are actually consensual sex.” I don’t know by what means he arrived at THAT conclusion, but if that’s his belief, maybe he and his cop shop should also stop investigating robberies, because those are obviously just voluntary giveaways of wallets, cars, and sundry other valuables, right?

21. Joe Fucking Scarborough. Be careful what you ask for when you tell the ladies to smile, Joe…you just might get it. (Orrrrr maybe not.)

22. David Fucking Duke. Hitler’s image, rehabilitated by comparison to Der Drumpf? At this rate, he’s gonna come back from the dead to tell both of you to stop giving him a bad name!

23. Marilyn Fucking Gladu. Aren’t you glad the Cons are out of power, now? I know I am. Because there’s really nothing uglier than a Canadian dominionist fangirling for Der Drumpf.

25. Daryush Fucking Valizadeh. Poor Roosh V. Ever since it was revealed that he was literally living in his mother’s basement, he’s been casting around desperately for a way to make other assholes like him again. Somehow, though, I don’t think that an “emergency plan” for when one of his oozy followers murders an unarmed, innocent protester is going to do it, though. The white supremacists have already decided that Roosh — whose roots, ironically, are literally Aryan (Iranian) and Caucasian (Armenian) — isn’t white enough for them.

26. Anders Fucking Behring Fucking Breivik. Why the double Fucking? Because that’s how whiny and asinine he comes off, complaining about the three whole fucking rooms he has to himself at Club Fed of Norway. He should be thankful he’s not getting the Jared Fogle treatment right now.

27. Arthur Fucking Orr. Too poor to buy food? Tough shit! You don’t get any means to dig yourself out of poverty, not even a car to get around in to and from job interviews! Yes, that’s right: This bozo’s plan to get people off welfare is actually a great way to keep them on it — and in penury — forever. But hey! It’s Alabama. Teh Stoopid LIVES there.

28, 29 and 30. Greg Fucking Gutfeld, Juan Fucking Williams, and Kimberly Fucking Guilfoyle. There’s a very good reason there’s no “Irish Lives Matter” movement (outside of white supremacist hate sites, that is), and it has nothing to do with the superior character of uncomplaining, servile white people who just “got over it”. It’s because their ancestors did not cross the Atlantic in chains, they’re not the victims of ongoing racism, and indentured servitude is NOT the same thing as slavery, you fucking idiots.

31. Galen Fucking Weston. One day, farmers’ markets are going to kill someone? Ho, ho, ho. More like someTHING, in his case. And that thing is his profits…which Loblaws, like many other supermarkets, props up by selling expired and unsafe foods under false Best Before dates. But yeah, keep telling us how dead we’ll be by buying fresh food direct from the producer, big boy. As P.T. Barnum used to say, there’s one born every minute!

32. Steven Fucking Scholz. When all you’ve got is a hammer, every problem looks like a nail…and when all you’ve got is a shitload of guns, why not shoot up the neighborhood just for the hell of it? Well, among other things…because PEOPLE LIVE THERE. And guns are made only for one purpose, and it ain’t to alleviate boredom, you fucking jackass.

33. Janet Fucking Porter. Finally, FINALLY, the people of Ohio have spoken, and at least one anti-choice “heartbeat bill” wanker has lost. But she’s still getting listed, because, you know, she’s still a wanker!

34. Scottie Nell Fucking Hughes. Riots are a good thing, says one of Der Drumpf’s superannuated pom-pom girls. Well, I guess they would look that way to someone who’s never been tear-gassed or had rubber (or live!) ammo fired at her ass in one.

35. Frank Fucking Gaffney. Well, I knew he was a deranged fuckin’ asshole, and I’ve often listed him here for it before. But he’s just gone to a whole new level of depravity by joining forces with Ted Fucking Not Even Eligible to Run Cruz.

37. Bibi Fucking Netanyahu. Not content with his current apartheid wall, now he wants to surround all of Israel with one. To keep out the “wild beasts”. Where the fuck have we heard this rhetoric before?

39. Matt Fucking Walsh. Men will be “leaders” on the subject of abortion on the day they all can become pregnant. Until then, they can stay the fuck out of women’s bodies. Got that?

40. Jeffrey Fucking Lord. No, violence is not in the DNA. Nice dogwhistle there, racist boy.

And finally, to Bob Russel, a.k.a. BR44475@gmail.com (IP: 73.219.161.68), of Newburyport, Massachusetts. Bob was kind enough to inquire about my mental health. I hope the answer meets your expectations, Bob, since you certainly picked the perfect place to ask. Maybe next time, you’ll be polite enough to keep your opinions about me to yourself like a good little self-respecting conservaturd, hmmm?