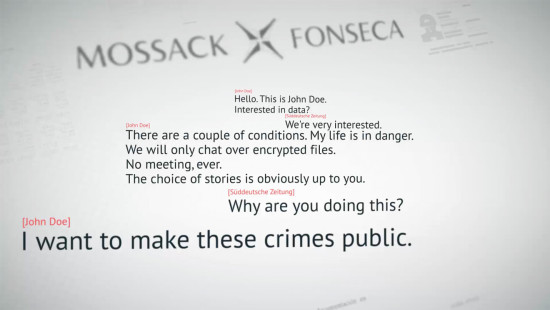 Hola! And a very buen día to todos ustedes. As leaks from the Panama Papers continue to trickle out in publications around the world, I thought it might be worth mentioning what is, and what is not, being “leaked” concerning Venezuela. Some of you might be surprised at this, but I’m not, because it fits a well-established pattern that will no doubt “inform” (cough) media reports up here in the anglosphere, too, as it always has where Bolivarian Venezuela is concerned. Here’s the story, by AlbaCiudad’s Luigino Bracci, via Aporrea:

The leak of 11 million documents which reveal how wealthy and powerful persons use fiscal paradises to launder money, evade taxes, and hide their wealth, were made known on Sunday by the International Consortium of Investigative Journalists (ICIJ). The documents come from the Panamanian firm Mossack Fonseca, and some 270,000 (2%) mention Venezuela. Although in the majority of countries, there are politicians, businesspeople, bankers, celebrities, and persons of all political tendencies involved, it’s not like that in Venezuela: they are trying to limit denunciations to Chavistas. And that’s no coincidence: the journalists analyzing the Venezuelan documents work for the websites RunRunes, Armando.info, El Pitazo, and Efecto Cocuyo, all of them of marked opposition tendency and linked to the Instituto Prensa y Sociedad (IPyS), an organization which has received hundreds of thousands of dollars in financing from the National Endowment for Democracy (NED), USAID, and the US State Department.

The leaked documents are records of persons who opened offshore companies in fiscal havens with the Panamanian firm Mossack Fonseca. The data were brought to light on Sunday in a joint project of more than 300 investigative journalists from around the world, from 109 media outlets. It’s also been said that this is the largest declassification ever made. Some 2.6 terabytes of data, 1500 times greater than the famous Wikileaks “Cablegate”.

Despite the abundance of documents concerning Venezuela (some 270,000 of them), there have only been four cases of Venezuelans published, all of them supposedly connected to Chavismo: Adrián Velásquez, supposed former chief of President Chávez’s bodyguard, and his wife, Claudia Díaz, said to have been “Chávez’s nurse”; General Víctor Cruz Weffer, a former functionary tried for corruption; and an ex-executive of Petróleos de Venezuela (PDVSA), Jesús Villanueva.

Strangely, in the case of Venezuela, there is no mention of businessmen, right-wing politicians, bankers, sports personalities, or celebrities. The obvious partiality of the reports causes one to suspect that they are only publishing cases linked to a certain political position: Chavismo.

This contrasts with the publications of the Panama Papers in other countries. In Argentina, president Mauricio Macri appears to be involved, along with his father Francisco and brother Mariano. But there is also a person close to the Kirchners, and even the soccer star, Leonel Messi. In Spain, there is Pilar de Borbón, aunt of King Felipe VI, and the Spanish film director, Pedro Almodóvar. In Mexico, there is Juan Armando Hinojosa, known as the “favorite contractor” to Mexican president Enrique Peña Nieto. In Peru, they mention César Almeyda, former chief of Peruvian intelligence and advisor to former president Alejandro Toledo. In Chile, there’s Alfredo Ovalle, ex-president of the Chilean Confederation of Production and Commerce. In Panama, there’s Riccardo Francolini, a very close collaborator with the ex-president of Panama, Ricardo Martinelli. And there are also persons close to Russian president Vladimir Putin, as well as British prime minister David Cameron.

To what do we owe this bias in the Venezuelan case? Probably it’s due to the fact that the journalists involved, all of them, are employees of openly oppositionist digital media, and are in no way objective or impartial, and are also frequently accused of being financed from abroad in order to attack the Venezuelan government. Some of these media are known for their lack of journalistic rigor, for failing to verify the information they publish, and for putting out gossip and rumors, almost always against the government of Nicolás Maduro or his predecessor, Hugo Chávez.

It must be clarified that, at the time of this writing, the Panama Papers documents have not been made public; they cannot be browsed or downloaded by anyone other than the journalists of ICIJ. Privacy reasons, protection of sources, and the immense volume of data and the large number of persons wanting to access the same, would indicate a technical challenge.

According to a note on Efecto Cocuyo, the journalists analyzing the documents are Alfredo Meza, César Batiz, Ewald Scharfenberg, Fabiola Zerpa, Katherine Pennacchio, Laura Weffer, Lisseth Boon, Roberto Deniz and Ronna Rísquez, under the co-ordination of Joseph Poliszuk, editor of Armando.info — a website which describes itself as “investigative journalism”, but whose tendency is markedly anti-leftist.

All these journalists have been members of, or have received training, aid, or recognition from, the Instituto Prensa y Sociedad Venezuela (IPyS-Venezuela), a non-profit organization created in Peru, which lawyer and investigative journalist Eva Golinger has denounced for having received millions of dollars in funding from the National Endowment for Democracy (NED), the State Department, and USAID in order to work with local media and design messages and propaganda against the Venezuelan government.

“IPyS, created in Peru with USAID and NED money, and later established in Venezuela in 2003, received $49,975 US from the NED in 2009 to ‘promote and defend freedom of expression and press freedom in Venezuela’,” wrote Eva Golinger in 2010. “IPyS also received more than $821,000 in 2008, directly from the State Department, along with the Venezuelan organization Espacio Público, for a two-year project to ‘promote freedom of expression’ in Venezuela, finance journalism programs in Venezuelan universities, and train hundreds of journalists in the use of ‘innovative’ media.”

Golinger describes IPyS as a propaganda agency, financed with US money, as well as being used to attract, recruit and train new journalists favorable to their causes.

In fact, Ewald Scharfenberg, one of the investigators who will publish information from the Panama Papers, is president of the Board of Directors of IPyS Venezuela, and one of their principal spokespersons and trainers. He has also been a correspondent for Reporters Without Borders, another organization financed by the US State Dept.

Alfredo Meza is also a member and editor of Armando.info, along with Joseph Poliszuk, and is a correspondent for the Spanish daily newspaper, El País, according to his Twitter profile. Meza has also given courses and workshops, along with Sharfenberg, under the aegis of IPyS, in various parts of Venezuela and in right-wing local media such as El Nacional.

César Batiz is founder and co-ordinator of the websites El Pitazo and Poderopedia, both rabidly oppositionist. The latter is described as a denouncer of the links and ties of power in Venezuela. Batiz won awards from IPyS in 2014 for several multimedia projects and his coverage. Last September, PSUV parliamentary deputy José Ávila denounced Batiz as having been contracted by the US to write reportage with the purpose of “trying to deceive, pressure and persuade the US government with an opinion template which would allow it to take actions against the government of Venezuela.”

Laura Weffer is founder and director of Efecto Cocuyo, an openly oppositionist website.

Without passing judgment on the integrity of these professionals, the fact is that, in a country as markedly polarized as Venezuela, it is impossible to think that this team could generate materials not of anti-Chavista character, surely omitting personages from the business, corporate and political spheres of the Venezuelan right.

It remains to be seen if the data from the Panama Papers will be released in their entirety on the Web, with tools for the public to explore them, in order to get a better idea of the real contents of the 270,000 documents referring to Venezuela.

Translation mine. Links added, also mine.

Interesting, isn’t it, how only right-wing opposition websites were selected to handle the Venezuelan leaks? And how they’ve only published four paltry accounts, to date, out of more than 200,000 of them? What are these yellow journalists trying to hide? Perhaps their own, or perhaps their owners’, involvement?

One thing they can’t hide is their ties to the US State Dept., and that’s mainly because THOSE guys are only throwing them peanuts compared to what’s been squirreled away offshore, in the Bahamas or wherever, with the help of Mossack Fonseca & Co. Also, the State Dept. is actually required to disclose who it throws money at abroad, at least in response to FOIA requests. Eva Golinger has been relentless in her pursuit of those, and you can read all about it here.

Meanwhile, for a wee bit of comic relief amid all this super-serious bullshit, here’s what Alfredo Meza has seen fit to retweet on his yellow, yellow tweeter:

“Regarding the #PanamaPapers of Venezuela, officialism has only been able to say that we’re with the CIA.”

Cute, Ewald, really cute. Except, if you read what I translated above (accurately and in its entirety), you’ll note that the CIA isn’t even mentioned. Only the NED, USAID and the State Dept., and their ties to the “journalists” and their organizations down yonder.

But it would certainly underscore the quality of these “professionals” and their oh-so-unbiased professional work in Venezuela, no?

This entry was posted in A Man, A Plan, A Canal, Chile Sin Queso, Crapagandarati, Don't Cry For Argentina, Fascism Without Swastikas, Good to Know, Huguito Chavecito, Inca Dink-a-Doo, Isn't It Ironic?, The United States of Amnesia, Under the Name of Spain. Bookmark the permalink.