Wankers of the Week: Damn Rooskies!

Crappy weekend, everyone! And a very crappy one to all you commie spies out there in Moscow, snurk. Don’t worry about the New Cold War, we’ve got you beat for cold weather here in Canada, easily. Just hand over the moose and the squirrel, and no one gets hurt. Except of course the following, in no particular order:

1. Marine Le Fucking Pen. Oh sure, charge refugees to have their “children taken care of”. People who came with literally NOTHING, and who are often already in debt to the smugglers who brought them in. How’s that supposed to work again? Oh yeah…by appealing to the Frenchness of the French, and appeasing the xenophobes. Silly me. I guess I just don’t understand this fascist merde.

2. Bill O’Fucking Reilly. Oh lordy, here goes that Billo-made War on Xmas thing again. Hey Billo, go easy on the eggnog, wouldja? Or at least, stick to the non-alcoholic kind during working hours. Wouldn’t want to start humping a loofah while you’re on the air, would you now?

3. Sarah Fucking Palin. Oh, Quitbull. How is it that you managed to quit everything halfway through…except acting like a moron? Because if you had any brains in that stripey head of yours, you’d have learned that the original War on Christmas was fought by the Pilgrims, who didn’t believe in celebrating that pagan holiday. PS: HAHAHAHAHAHA! Like hell you will.

4. Pamela Fucking Taylor. Hey, Clay County Development Corporation, are you really sure you want this ape in heels working for you? STILL? Because, y’know, keeping her around isn’t exactly a good look. Especially since she’s as ungrammatical as she is unqualified and unprofessional.

5. Lance Fucking Wallnau. Oh, so college profs are “intellectual pedophiles” who “molest the minds” of their students? Gee. Where is the anti-PC brigade when you need them? Out to lunch, apparently. Because this guy is one hell of a special-snowflake advocate, calling for all church-ridden idiots to be forever insulated from heretical thought. And they’re not saying boo!

6. Theresa Fucking May. And speaking of intellectual sheltering and PC-ness, how about the apartheid wall that’s being built against honest discussion of Israel and ITS apartheid wall, by a certain unelected and very unprogressive PM of Britain?

7. Tom Fucking Horn. By now you should know better than to trust anyone or anything that appears on Jim Fucking Bakker’s televangelist show, right? Right.

8 and 9. Steve Fucking Hawes and Dick Fucking Venn. And speaking of “by now you should know better”, how about these guys? Yeah. They chose to write shitty letters to the editors of the LA Times, in which they made the fascistic internment of Japanese Americans out to be a Good Thing. Never mind that people actually died in those camps, that none of them were spies, and that all of them lost their hope of a decent life in their adopted country thanks to government-sanctioned racism. “Unbalanced” news coverage? I’d say these idiots are the unbalanced ones.

10. David Fucking Grisham, Jr. Santa Claus isn’t real? Neither is your imaginary friend, preacher-man. See how it is when two can play at that game?

11. Bibi Fucking Netanyahu. He’s not worried about Der Drumpf’s (or his followers’) antisemitism? Stands to reason. In his eyes, even the stinkingest Nazi is a better Zionist than the overwhelmingly left-leaning US Jews.

12. Philip Fucking Davies. Well, looky here. An antifeminist wanker has gotten himself elected to a commission on women and equality. His great idea for gender equality? Send more women to jail. Yes, really. And just think, this was in Britain. Der Drumpf didn’t even have to appoint this one! The Brits have just proved that the US doesn’t have a corner on fucking idiocy, after all.

13. Lorne Fucking Gunter. Meanwhile, out in Alberta, here’s a shitty “journalist” who hasn’t even the common courage to admit that he took a bribe before he went on record as defending Ezra the Putz. Or was it before he went on a cruise with Ezra? I don’t know. But I bet HE does.

14. Kanye Fucking West. He didn’t vote. But if he did, he would have voted for the comb-over who now wants to make him “an ambassador of sorts”. For what? Pussy-grabbing? Sweet Jeebus.

15. Tom Fucking DeLay. Maybe HE “got over” slavery…but then again, none of his ancestors were dragged across the Atlantic in chains, so there was nothing for him to get over. Except, of course, himself…which he will NEVER be over, because he’s the fucking Bugman, and all the chemicals he huffed have eaten his brain.

17. Theodore Fucking Beale. When is a Nazi NOT a Nazi? Apparently, when the Nazi himself says so. Fuck this “alt-right” ‘winger-PC bullshit, Ted…you ARE a Nazi. OWN IT.

18. Riley Fucking Herchenbach. Trying to get a woman fired from the company she owns, because she tried to set you straight on your dumb ass? Oooooooo, dude…how embarrassing for you. On so many counts, too. Ha, ha.

19. Alex Fucking Jones. Look, a shiny object! Too late for the inane distraction, Alex…we all see how hard you’re trying to shove #PizzaGate (and that preposterous slander I listed you for last week) down the memory hole. Also, are you forgetting that Der Drumpf’s own “soul-cooking parties” put those of your imaginary Illuminati to shame?

20. Condoleezza Fucking Rice. It’s been a while since Dubya’s Auntie Condi has been mentioned here, but it’s nice to see she’s lost none of her talent for backing a winner…and by “winner”, I mean a corrupto out the wazoo.

21. Milo Fucking Yiannopoulos. Aaaaaand there he goes again, being a drunken, self-serving douche with no redeeming social value whatsoever, posing as a “speaker” at a university. And harassing a trans student so badly that she’s now being forced to leave. But let anyone bar the door against him, and he’ll whine about how his Freeze Peach is being squashed. Who’s the special snowflake, again?

22. Gordon Fucking Klingenschmitt. Susan B. Anthony probably said it best when she said (and I’m paraphrasing) that she didn’t trust anyone who knew well what God’s will was, because it invariably coincided with their own. And conversely, John Jacob Jingleheimer shouldn’t be trusted, because everyone who disagrees with him is oh so conveniently “demon-possessed”.

23. John Fucking Bolton. Der Drump is BIGLY upset about lies, lies, LIES! So much so that he’s now installing this lying sheepdog as his deputy secretary of state. Yup, this shitshow is just gonna keep right on shittin’. 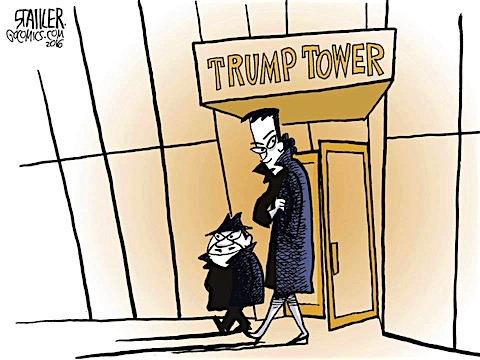 24. Lorrie Fucking Goldstein. “There you go, you colossal donut.” Care for some Ozonol? Because you sure smell like you got burned!

25. Fred Fucking Couch. Remember Affluenza Boy? Well, looks like he’s a chip off the ol’ block. Dear ol’ Affluenza Dad has no respect for public institutions, either…and no qualms about pretending to be a uniformed member of one.

26. John Fucking Sousa. Oh sure, you’re not a racist. Because making deportation threats against students of other colors is totally not a racist thing to do. Lemme guess: Anyone who points your racism out is the REAL racist? Yeah, thought so.

27. Bill Fucking Gates. Drumpf may have the “opportunity” to be like JFK, but in fact he’s going to make like Mussolini. And if justice prevails, he’ll probably end up hanging by his feet from a gas station roof like him, too.

28. Eric Fucking Drumpf. First he was going to auction off his own sister as a coffee date to the highest bidder — for charity, natch. But then someone must have twigged him to how bad that looked, especially since it’s a massive conflict of interest, so he stopped the auction. And well-heeled perverts everywhere sniffled and were sad. Bawwww!

29. Tony Fucking Perkins. Yes, Rex Tillerson must be stopped, all right. But not because of abortion or Teh Ghey. It’s the crapitalist conflicts of interest, stoopid!

30. Pat Fucking McCrory. Wow. Spiteful much? I guess being soon to be out of power must be getting to Gubnor Hatemonger, because he’s trying desperately to disempower the guy who beat him fair and square at the ballot box. Tyrants gonna tyrant, eh?

And finally, to the so-called “alt-right”, again. These pasty little shits with their ugly haircuts. These flying monkeys whom the black tweeters are ridiculing as we speak. They’re actually trying to get taken seriously as a Political Force To Be Reckoned With? So much so that their so-called intellectual leader (and coiner of that idiotically PC name for what’s otherwise just a motley bunch of Klukers and Nazi-punkasses) is considering running for office. In Montana. Where his own mother, who disagrees with him politically, is facing economic ruin thanks to him. If he does try it, I hope he gets his pasty ass kicked. The country is already facing total ruin thanks to their Dear Leader, Der Drumpf, and these guys are just gonna dig that hole deeper? They’d better be prepared to be the first to fall into it when the shots are fired. Because there is no way this can end well.