Wankers of the Week: Oops, Kellyanne did it again… 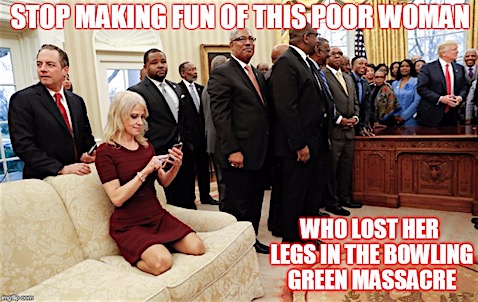 Crappy weekend, everyone! And a very crappy one to Kellyanne Fucking Conway, who seems to be having yet another week from hell. I kinda-sorta feel you, girl…up to a point. I mean, I haven’t sat on my feet, on a couch, since I was maybe 8 years old…and never in shoes. My folks brought me up better than that. And here are this week’s other badly-raised brats, in no particular order:

1. Tomi Fucking Lahren. It’s hard out there for a white-grievance pimp, isn’t it? Especially when Iranian film directors win Oscars. There, there, widdle snowflake. Aren’t you happy that Daddy Drumpf kept the bad creative man out of your country? Diddums!

2. Joshua Fucking Feuerstein. No, Joshie dear, your Jesus isn’t cancelling out all the whammies we Witches laid on your Daddy Drumpf, either. But it sure is fun seeing you blow a gasket over it all.

3. Robbie Fucking Gatti. Good lord, dude, did you fall face-first into a vat of chocolate syrup? No, you thought you were being cute by putting on the blackface and wearing your everyday clothes, and claiming you were going as Tiger Woods for Halloween. That’s a very strange way of “seeing only character”. The only character I see in you is that of a pious hypocrite. 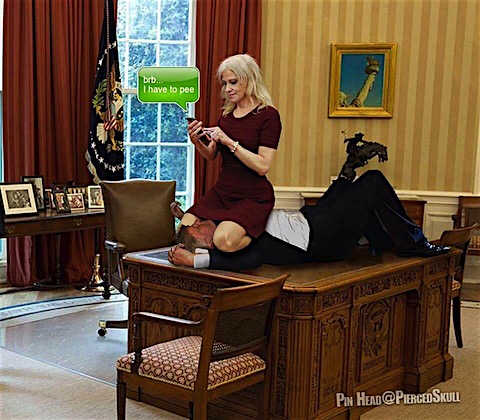 4. William Fucking Happer. No, carbon dioxide is NOT “demonized”, much less like “poor Jews under Hitler”. For one thing, carbon dioxide is a chemical. You literally cannot persecute chemicals. They are not people. And for another, someone who is not a climate scientist has no business calling climate science a “cult”. Especially if he’s from the cult of climate-science denial.

5. Tucker Fucking Carlson. And while we’re on the subject of the cult of climate change denial, get a load of him, flipping out at Bill Nye for trying to deprogram him. Bill, you’re a champ. And Fucker? You’re a chump.

6. Kellie Fucking Leitch. Pro tip, would-be CONservative leader: If you’re going to rail about “out-of-touch elites”, could you try NOT FUCKING ACTING LIKE SUCH A FUCKING ELITIST YOURSELF? Thanks awfully. PS: Also, WTF is up with this video? Were you on drugs, or was your propagandist? Ugh. PPS: Ha, ha, ha, NO. Trust me, lady…we’re laughing AT you, not WITH you. And by “we”, I mean regular Canadians, and not just the media.

7. Greg Fucking Locke. Oh dear, looks like someone REALLY hates it when people donate to Planned Parenthood in his name. You know what to do, Internets.

8. Sean Fucking Spicer. Oh dear. Looks like Sean Sphincter is really living up to his accidental nickname. And he’s doing it by smearing made-up shit all over REAL reporters, who are reporting real news whether he likes it or not. PS: And the Sphincter is also smearing dead navy SEALS. Lovely! 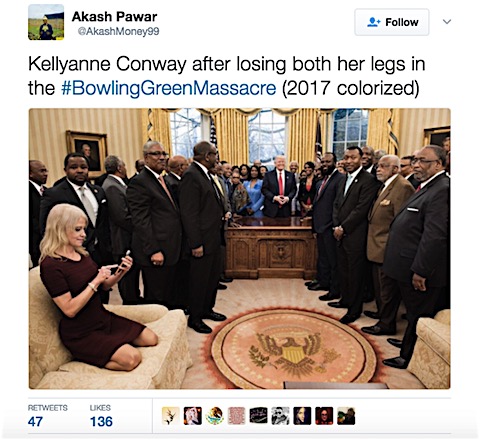 10. Bonnie Fucking Verne. And while we’re on the subject of people who should have nothing to do with children EVER, how about her? She’s all for killing undocumented immigrants. What the hell kind of example is THAT supposed to send???

11. Wayne La Fucking Pierre. And then there are those who should have nothing to do with guns EVER…including The Peter, who’s so paranoid and so far removed from reality that I think every firearm he owns should be confiscated just for his own safety.

12. Robert Fucking Davi. Washed-up has-been D-lister says WHAT? Drumpf is “virtuous”? Strange idea of virtue this cretin has, considering his boy is the most corrupt US presidunce in the history of ever, AND a pussy-grabbing john, to boot. 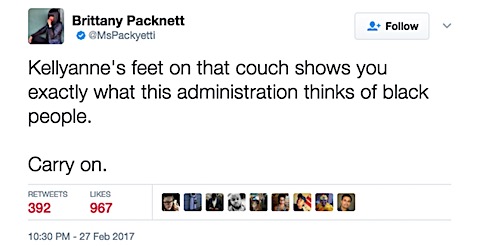 13. Rick Fucking Santorum. Pre-existing conditions are a “scam”, are they? Well, then. This begs the question of Icky Ricky Buttsploodge and what his stupidity and dissociation are — and why HE’s not getting kicked off HIS plan.

14. Gary Fucking Naeyaert. So, you like shaking your wife (and any other woman who opposes you), eh? Well, maybe someone ought to shake YOU, Mr. Charter School Bully…and by that, I mean the way a terrier shakes a motherfucking RAT.

15. Andrew Fucking Pierce. So, trans people are “gender fascists”? For what — EXISTING? Figures that the Daily Fail would publish such drivel. Along with bullshit about how Justin Trudeau is going to pose nude for a gay magazine, which he hasn’t done and never would. And just think, kiddies, this one is mad because he claims to have fought for gay rights in the Eighties. O RLY? Not as a Tory, he didn’t. Meanwhile, out in the real world, at least four of those “gender fascists” have been killed just this past week alone. By REAL fascists. 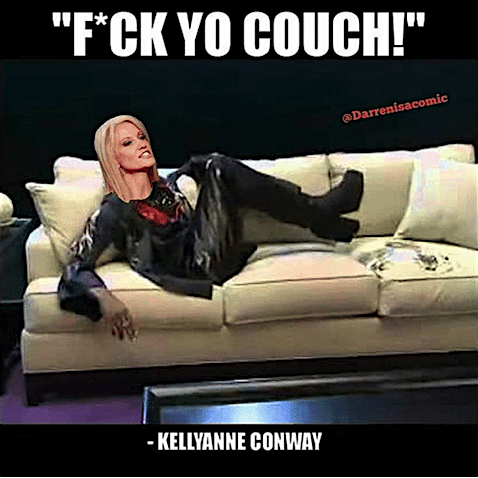 16. Kevin O’Fucking Leary. So, now we know…he’s not just a sexist, he’s a sexual HARASSER. Who uses no-pants skyping to retaliate over having to “work for women” at the CBC. And then he calls himself a “feminist” when challenged on his pantsless antics? Christ, is this man 12 years old?

17. Jeff Fucking Sessions. No, JugEars McMarbleMouth, pot does NOT cause violence. You might be thinking crack. Or meth. Or booze. Or whatever the fuck you’re on. But pot? The worst it could lead to is two stoners drowsily arguing over who gets the last bag of chips at the corner store. PS: Another lie? Boy, BYE! PPS: Aaaand BOOM! Time to live up to your words, Jeffy-poo.

18. Mark Fucking Chelgren. Hey! Remember him? The guy who wants to “balance” academic faculties in Iowa by (illegally) inquiring into the voting habits of prospective hires? Well, guess where he got HIS education? Yeah…at a not-so-reputable institution. Maybe you’d best leave the balancing to the steakhouse scales, eh pal? 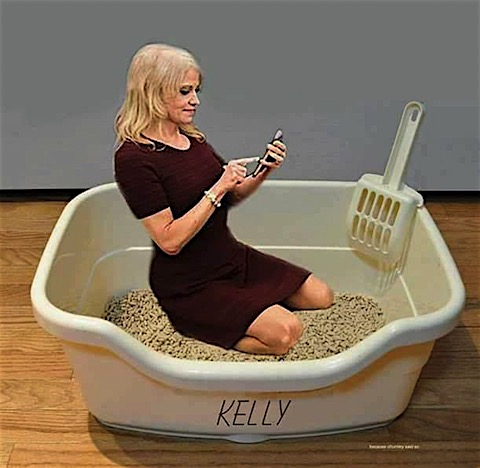 19. Paul Fucking Ryan. You know how those Randroid Repugs are. They “never give up on a dream”. Especially when it involves being the literal death panel for tens of thousands of uninsured US citizens a year. You know, kind of like Nazi Germany but without all the swastikas and cattle cars?

20. Janusz Fucking Korwin-Mikke. Women need to be paid less because they’re weaker and stupider than men? That’s a weak and stupid argument from a weak and stupid man, whose weaknesses and stupidities include racism and sexism. Maybe HE should be paid less, too — a LOT less. Maybe even nothing at all, at least in the Europarliament!

21. Sebastian Fucking Gorka. I know I’ve been laughing at this idiot all week, but really, how can one NOT? I mean, he just keeps jumping up and down, pointing and gesticulating, obviously begging for the attention from the major media. Yeah, yeah, dude, we get it. You’re an unqualified dunderhead with a pompous way of talking. We KNOW! Don’t make everyone review your laughable diploma-mill Ph.D. dissertation, now…

22. Ingrid Fucking Carlqvist. And while we’re on the subject of unqualified dunderheads with a hard-right hate-on for Muslims, how about HER? Surprise, surprise, Sweden doesn’t like her…but FUX Snooze does.

23. Mike Fucking Bost. Hooboy. Where to start with him? Well, how about the fact that he’s too big a wimp to appear at town halls anymore. Seems to be a trend, especially over there on the right…and the further right you are, the less you can stand the heat, apparently. But what should really get him booted the fuck out of the kitchen is his racism. I mean really — who says “orientals” anymore, much less linking Asians (I’m assuming the Chinese, during the Cultural Revolution) implicitly with barbaric behavior? Ugh.

24. Gregory Fucking Lenehan. “Clearly a drunk can consent”? Not when she’s passed out in the back seat of a cab, she can’t. Jeebus. Does anyone have to explain incapacitation and unconsciousness to you? How the hell did you even graduate high school, never mind law? And how the fucking hell did you become a judge with such a poor sense of judgment? 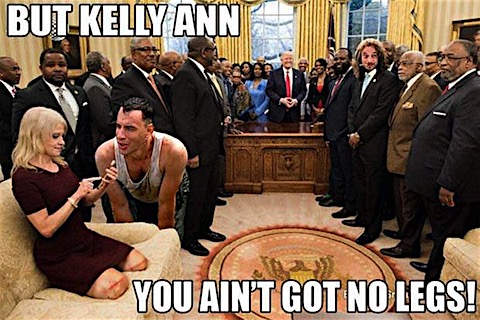 25. Ron Fucking Johnson. Nothing says “man of the people” like sending cease-and-desist letters to constituents who keep trying to contact you because they need your fucking help. You can put on the other pointy hat and go join #23 in the corner for that. 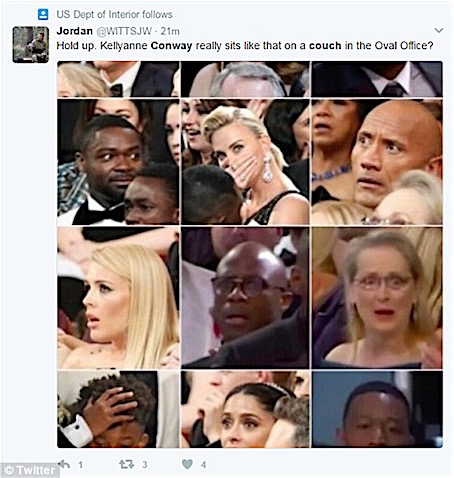 28. Brandon Ray Fucking Davis. Doesn’t matter who’s president (for however long) now. The law still says that you don’t get to run people down, even if they’re gay and you’re drunk and you don’t like it. How about THEM apples?

29. Thomas Fucking Quiggin. Lest you think that #21 is just an anomaly from Transylvania, via the US of Amnesia…nope. We have far-right, Islam-obsessed, terror-happy freak scenes in Canada, too. And he is one of them, and just as unqualfied as his Transylvanian-American counterpart. Oy, oy, OY.

30. Roger Fucking Marshall. Just because there are some poor people who don’t want healthcare, doesn’t mean you can get away with the “so I shouldn’t have to pay for them” excuse. If they don’t want it, they won’t use it. Meaning, they won’t cost you a cent anyway. You, sir, are not only a pious feckin eejit, you are a shitbag who takes Jesus’s name in vain. 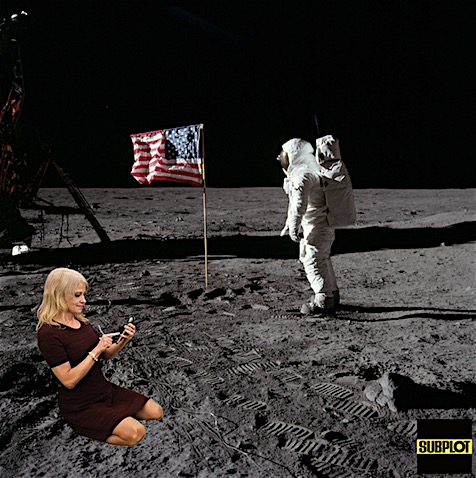 And finally, to Der Fucking Drumpf himself, AGAIN. He really outdid himself this week with the claptrap, literally using a bereaved woman to trap the claps for him and make him look “presidential” to the talking heads, who of course were stupid enough to oblige because no one wanted to be the evil meanie to point out that the poor dear lady was being shamefully used. As usual, it was up to Michael Moore to say what no one else in the media dared. But hey! Pity it’s not working. How do I know? He’s even lost FUX Snooze. And everyone knows how they clap like well-trained seals for any terrible thing anyone with an R after their name does! And now the Big Orange Baby is whining that the very word “Resist” is slowing him down too much. It’s cutting into his golf time at Mar-a-Lago — oh sorry, the Winter White House, you guys! And it’s got him so distracted that he can’t even spell a simple two-syllable word in his tweeting anymore. (Keep that shit the fuck UP, y’all hear?)