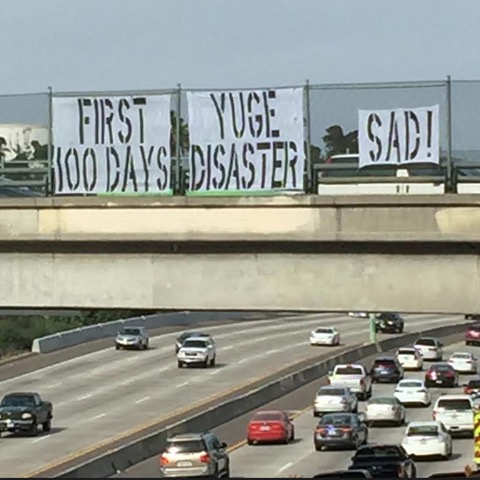 Crappy weekend, everyone! And a very crappy one to the White House Squatter in Chief. You made it to 100 days in office, and that’s including all the weekends you went golfing at Mar-a-Lago on the taxpayer dime after promising to be the Hardest Working President Ever. Congrats, I guess. Especially on your epic economic fail! Hey, Amurrica is greater again already, amirite? And here’s who else is falling flat on their ass this week, in no particular order:

1. Donald Fucking Drumpf, Jr. Yeah, him. And you won’t believe what got him listed this week. Because who the fucking hell kills pregnant prairie dogs for “sport”???

2. Tim Fucking Nolan. And while we’re on the subject of people from the Drumpfian orbit, there’s this guy. Who did something much more predictable than #1, in that he engaged in trafficking and prostitution of a minor. Say, isn’t that what the Big Boss ALSO did?

3. Mike Fucking Huckabee. Billo’s been fired for making FUX Snooze look bad (or TOO bad, rather, since they don’t care if they look sexist and nasty until they start losing sponsors). So who’s gonna pick up the slack? Yeah. THIS guy. Aaand FUX is still looking pretty damn terrible. Good job, guys!

4. Mick Fucking Mulvaney. No, stupid, a border wall won’t protect anyone from diseases. People can get sick and die without help from out of country, especially since the US healthcare system is so damn shitty.

5. Ivy Fucking Taylor. No, unbelievers aren’t “broken”, and their lack of beliefs don’t cause homelessness. You’d be surprised at how many people living on the street are, in fact, believers. And their God let them down. But not as much as other people did, because it’s human callousness to one another, not to God, that really causes homelessness and poverty.

6. Steve Fucking Farese. Women are such good liars because they’re the weaker sex, huh? Well, dude, that’s a lie on two counts. So. How’d YOU get so fucking good at it? Oh yeah, that’s right…you keep getting your dick mixed up with your head! 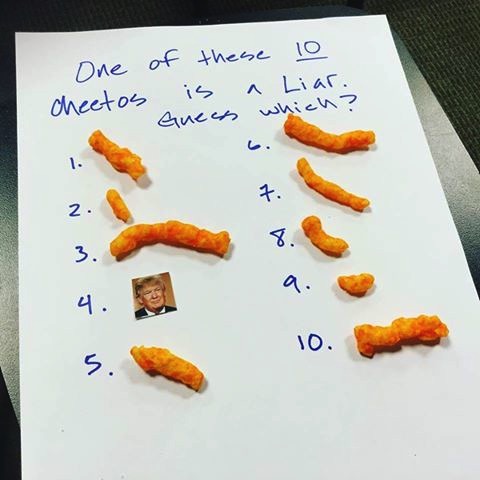 7. Cheryl Fucking Hall. Your Drumpf hat is religious headgear? You, Florida Woman, are part of a dangerous, devil-worshipping cult. Take that thing off your head at once!

8. Sean Fucking Hannity. Oh surprise, surprise. The Baby Jesus, that paragon and champion of Repugnican Family Values™, is also a sexual harasser! Gee, what are the odds, given that he worked for a channel that harbored, hired, and was RUN by sexual harassers? PS: Petulant punkass is petulant. Cry moar, Baby Jeebus. PPS: Since when is Debbie Fucking Schlussel a “liberal”? She is a fascist, yes, but that’s the only part you got right. Silly Baby Jeebus.

9. Sheri Fucking Few. “Make America America Again”? Uh, that’s MAAA for short, and it sounds like just the kind of blatting you’d expect from right-wing sheeple. Which, of course, she is. The question is, when was “America” (i.e. the United States, which is NOT a continent, much as some might think it is) ever NOT “America”? It’s been so aggressively “America” this whole time that the world is collectively rolling its eyes hard enough to glimpse its own brain. 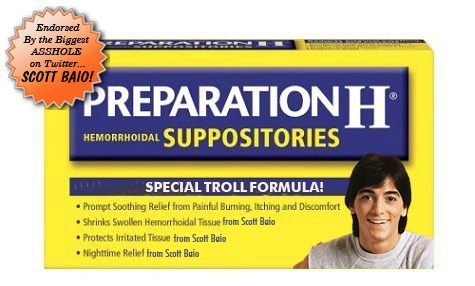 10. Scott Fucking Baio. Joanie may have loved Chachi, but everyone else thinks he’s a dick…and what he had to say about his former co-star’s death has not exactly done anything to change that. Well, other than dig the hole deeper, of course. Hey shitass, she died of CANCER, not drugs and alcohol. And dammit, why couldn’t it be YOU instead? PS: Nice of you to send your wife to do your dirty work, you little shit.

11. Theresa Fucking May. She’s unelected, and what’s she doing? Everything she can to stay that way, apparently. Up to and including disenfranchisement of expat voters. Does she think they’re all progressives, perchance? How funny it will be when THAT gambit blows up in her face, along with all the others.

12. Sarah Fucking Palin. Yee-haw! Snowbilly Grifter has done it again. And what is it this time? Telling people they have to “earn” their “free” college tuition. Um, Quitbull…words mean things. Free things don’t have to be “earned”. Also, you’re no longer in power anywhere, and therefore, in no position to tell people what they should or shouldn’t do to get college tuition. Go back to your meth lab and don’t say another word, ‘kay? 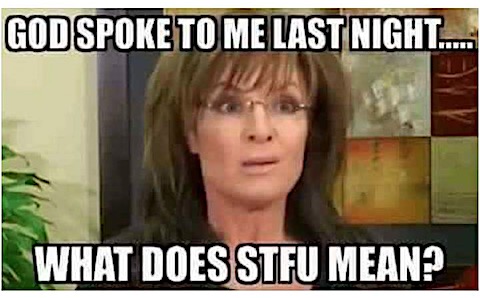 13. Kellie Fucking Leitch. Get the fuck out. No, that’s not a message to border-crossing refugee claimants, Kellie…that’s what I have to say about you and politics in general. Get. The. FUCK. OUT.

15. Milo Fucking Yiannopoulos. Yeah-Nope never learns, does he? Berkeley has made it abundantly clear that they want nothing to do with this opposite-of-fabulous douchebag and his ugly habit of setting trolls on innocent people, but he’s planning to come back and occupy it. In the name of FREEZE PEACH, of course…which he seems to think he owns and has invented (yeah-nope, and YEAH, NOPE.) For his sake, I hope he has some damn good medical insurance, because he’s probably gonna need it when the dust settles and the Antifa are through with his coked-out, drunken ass. PS: Still waiting for your apology for radicalizing these two fucking terrorists, Milo! 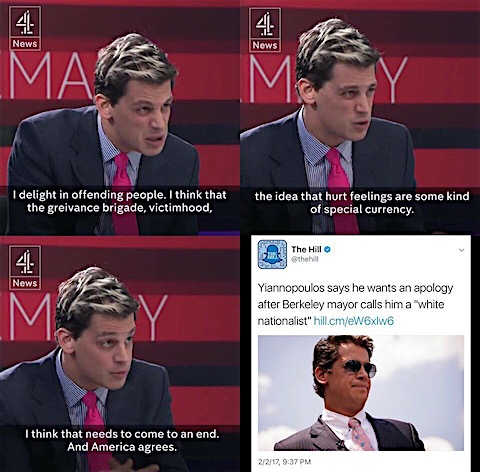 16. Sebastian Fucking Gorka. He may be one of Drumpf’s “advisors” (say that in a Wile E. Coyote Sooooooper Genius voice, kiddies), but he sure as fuck ain’t no expert. And he can’t handle questioning by undergrad students. What diploma mill did he get his Ph.D. from, again? Because he doesn’t even understand what cultural appropriation means. PS: Ha, ha!

17. Alex Fucking Jones. Yes, it’s been a banner week for the Tinfoil King. And this week has seen him get sued by a yogurt company, and also bragging about a lot of teenage sex that I’m pretty sure he hasn’t had, unless he counts the number of women who’ve told him to go piss up a rope. Aaaand not surprisingly, he’s lost custody of his kids as a result of all that and, I’m sure, a whole lot more tinfoily stuff that we didn’t get to hear about.

18. Mike Fucking Enzi. Telling LGBT kids that they’re “asking for it” by just being themselves? Smells like victim-blaming to me. Guess Wyoming STILL isn’t living up to its billing as “The Equality State”. Also, nice nopology, asshole! 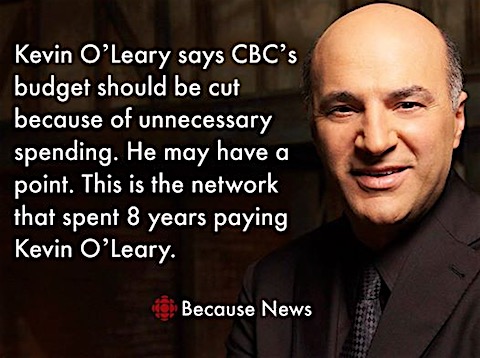 19. Kevin O’Fucking Leary. Yay, he’s dropping out of the Con leadership race! But he’s now endorsing…Maxime Fucking Bernier? Yeah, this is a distinct case of Dumb endorsing Dumber. Could be worse, though, he could be endorsing #13…who is not only fucking stupid, but seriously fucking SCARY. PS: Ha, ha.

20. Jesse Fucking Watters. So okay, #14 is most emphatically NOT a feminist role model. But does Billo’s former sidekick really have to sexualize her like that? Does he? Ugh. PS: Nice lame excuse-making, too.

21. Sean Fucking Spicer. He blames Obama for a security clearance that his boss handed out? Dude, I blame the White House Easter Bunny.

22. Ammiel Fucking Hirsch. Jewish Voice for Peace is a terrorist group? Oy fucking vey. And here I thought they were a Jewish PEACE group. One that doesn’t consider Israel to be some kind of holy grail, but a source of grief for their Palestinian brethren. And one that considers peace, not Zionism, to be the best expression of their Jewish souls.

23. Dave Fucking Daubenmire. Look, Mr. Amurrican Taliban, I’ve got a lot of problems with FUX Snooze requiring its women to wear dresses and sit at a camera angle that highlights their legs. But that’s just it: It’s FUX Snooze requiring them to do this. They’re not doing it of their own free will. They don’t get to wear pants. And they are NOT “inviting” sexual assault, although I’m sure Roger Fucking Ailes, Bill O’Fucking Reilly, and all the rest of the creepers would like nothing better than to read it that way, so they can all go on getting away with murder.

24. Jason Fucking Chaffetz. He’s quitting Congress, but he’s still rushing to squeeze in that last-minute Obamacare via surgery to remove some 12-year-old screws and pins in a leg he broke long ago. While denying it to the taxpayers who foot (heh) his salary. It doesn’t get much more wanky than that, does it?

25. Randy Fucking Weber. Oh, dry the fuck UP, you whited sepulchre. God doesn’t care a shit about same-sex marriage or legal abortion. We’ve had the former here in Canada for over a decade, and the latter since 1988, and nobody’s upset about it except maybe Charles Fucking McVety. And who the hell cares what HE thinks? He’s a toxic turd, just like YOU.

26. David Fucking Duke. Creep, get your grotty fascist mind out of white girls’ pants. And everyone else’s pants too, for that matter.

27. Marine Le Fucking Pen. And speaking of grotty fascists, how about her? She’s out to erase not only Muslims, but Jews from France. Don’t be buying that “moderation” hype, mes amis. And don’t kid yourself that it’s just “secularism” that she’s promoting, either. Secularism means no official state religion, not official persecution of minority religions by the state! 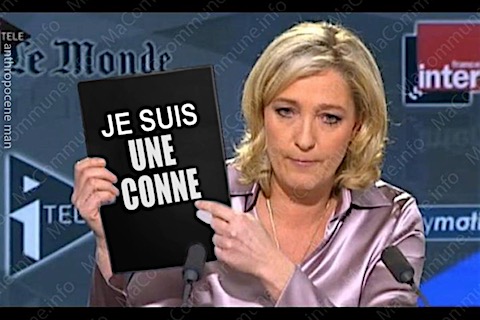 28. Andrew Fucking Anglin. And continuing with the “grotty fascist” theme, since we’re on a roll here: Apparently, the great national goal for all these white supremacist proudboys is to get their sadistic little jollies (VERY little, in the case of Andy, who’s 5’2” and 140 pounds sopping wet) from making fat chicks cry and, like Brave Sir Robin, running away from any man who comes to a woman’s defence. Yes, REALLY.

29. Wayne LaFucking Pierre. Yes, folks, The Peter is still wanking. And no wonder: Gun sales have sagged since the threat of Obama coming to take your guns away has waned! He has to gin up sales for his industry owners somehow!

30. Robert Fucking Fisher. Surprise, surprise, surprise…the founder of Reddit’s infamous “Red Pill” forum is a do-nothing Repuke state rep from New Hampshire! He also has two dinky little computer repair shops. He likes to inflate his image, but he’s not exactly a hit with the ladies (whose intelligence he’s constantly insulting, not that he’s bitter or anything). He’s even a rape and pederasty apologist! It’s almost like all this shit fits in with some kind of general pattern, isn’t it? 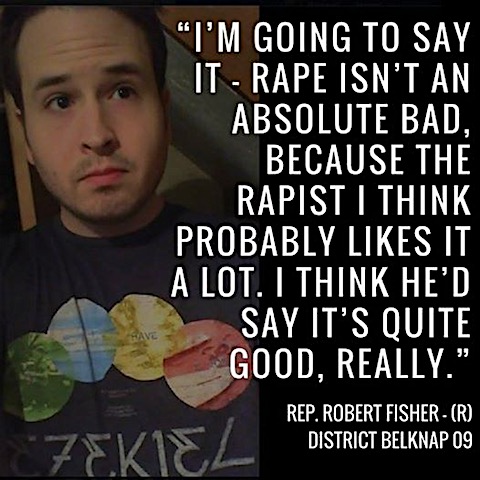 And finally, to all the right-wing terrorists out there. Especially the fucking proudboys who deliberately incite riots and think that cereal beatdowns (yes, really) are some kind of training for the racial “holy war” to come. Please, continue to make asses of yourselves. There are not so many of you, but there are plenty of baseball bats that need to be christened, and there are plenty of antifa heroes waiting for their chance to punch a Nazi in the name of REAL freedom. And given what wimps the lot of you are, it shouldn’t take much to make you cry. Or beat a hasty retreat with your tiny schlongs tucked between your clumsy legs.