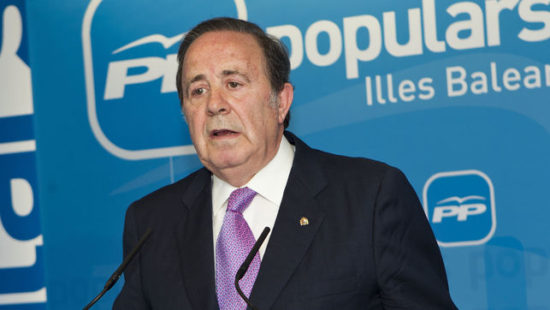 It’s been a while since I translated anything out of Spain, but this horrific report has caught my eye. And the picture it paints of the Partido Popular — the “Popular Party” directly descended from fascist Generalissimo Franco himself — is as sordid and ugly as you can imagine:

The former president of the Popular Party of Palma de Mallorca, José María Rodríguez, and regional deputy Álvaro Gijón, have attended drug and sex parties at an estate owned by businessman Bartolomé Cursach or in brothels on the [Balearic] islands.

Judge Manuel Penalva has revealed the secret, and the shit has begun to float. Every Monday they would organize poker parties on Cursach’s estate, Puntiró, and when the games were over, “there were authentic bacchanals.”

At the parties, they would ply girls with cocaine. The girls “were very well paid”, but “they had to submit to beatings, drug overdoses, and violent sexual practices” in which “sex toys” were used, or they were tied up and made to have sex with several men at a time.

A witness stated that she knows from her comrades that Rodríguez “would spend entire afternoons” in a brothel in Palma, where he would consume “expensive bottles [of liquor]” and “constantly went around picking girls to have sex with”, with whom “he surrounded himself”.

The girls refused to have sex with him because he had “some strange and dangerous tastes”, for which reason Rodríguez “ordered girls to be brought in off the street, and also boys”, so he could watch them having sex with each other or with the girls. The witness added that “Gijón also went to that place”, although “in a more sporadic manner” than Rodríguez.

She also testified that “on numerous occasions”, she saw Rodríguez coming out of the place “in a lamentable state” and “totally gone on cocaine and alcohol”, while Gijón went “in an official car” as well, in a “deplorable” state.

The witness also affirmed before the judge that Gijón and Rodríguez didn’t pay the girls, but “the house paid them”. Also, the place did not sell cocaine, but the two politicians “called nobody knows whom and they brought it to the place”, and when they were tired, “they called the chauffeur and left.”

A witness stated that at another party, organized in Mega, Gijón ordered her to go “look for more cocaine” when they ran out of what they had, and that the person who paid her 500 euros for the drug was Gijón’s current defence attorney in the case, José Ramón Orta, who at the time was working in the security sector.

The woman stated that at one of these parties, at which Rodríguez was present, a friend of hers ended up with a broken arm, and was taken by the madam of the house to Son Dureta hospital “bleeding from her mouth and vagina”. She described her friend as a “mulatto girl, Brazilian and very beautiful.”

The witness visited her friend in Son Dureta and later, this same girl “disappeared off the map” when, according to the witness statement, Cursach “gave her a lot of money to go back to Brazil.”

I’m really not a bit surprised that a bunch of old fascists and their big-business cronies also turned out to be old puteros (whoremongers), or that they vacuum up the Colombian marching powder and overpriced booze like there’s no tomorrow. After all, this is the same bunch that, back during the horrific days of the Spanish Civil War, would squirrel away the bodies of their Republican and leftist opponents — the true democrats who were rightfully elected by the Spanish people — in unmarked mass graves that are still being located and exhumed right now. Hundreds of thousands of them. There is literally nothing ugly that they would not do…and sadistically get off on it.

More to come on this and related topics. Stay tuned.

This entry was posted in Brazil is the Bomb!, Drrrrruuuugs, Fascism Without Swastikas, Filthy Stinking Rich, Isn't It Ironic?, Isn't That Illegal?, Mobsters, Not So Compassionate Conservatism, Under the Name of Spain. Bookmark the permalink.