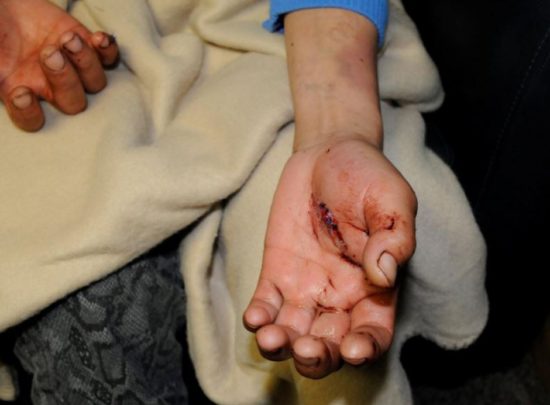 Canada has no shortage of institutional racist disgraces on its historical record. But lest anyone say “Oh, but we’ve moved beyond that!”, right in time for our 150th birthday party (which is less than a month away now), sit down and clam up. Because it’s still going on, even as we speak. And here is one particularly egregious case of it, right from our own so-called justice system:

On a Monday afternoon in June 2015, Angela Cardinal was led into an Edmonton courtroom handcuffed and in leg shackles. Metallic rattling echoed as a sheriff escorted the 28-year-old to the witness stand.

She was not the accused, but rather a victim — called to testify at a preliminary hearing after she was savagely attacked and sexually assaulted by a notorious sexual predator.

Cardinal was angry about being locked up.

“I’m the victim and look at me, I’m in shackles,” she told provincial court Judge Raymond Bodnarek.

“You’re going to go back to remand tonight,” he replied, “so that we can get you back here tomorrow.”

“Shackles,” she spat. “Aren’t you supposed to commit a crime to go to jail?”

Cardinal was forced to spend a total of five nights in the Edmonton Remand Centre during her testimony.

Angela Cardinal is not this woman’s real name, which is protected for privacy reasons. But can one seriously imagine them treating a white woman this way, even an impoverished one on crack? It’s obvious to anyone with eyes that “Angela Cardinal” is an indigenous woman.

And sure enough, several paragraphs down from the portion I’ve excerpted, we learn that Angela is “a Cree woman from Maskwacis, about 100 kilometres south of Edmonton”.

Why is a rape victim’s ethnicity so important? Because it has a bearing on the way she was treated by not only the court, but all of our society. And on the way other indigenous women in Canada are also treated. It has a bearing going all the way back in our history, even to before our 150-year-old Confederation.

The “Indian Act” of 1876 merely codified and consolidated the racist attitudes that had been percolating for centuries in the white settler colonies, and laid down the foundation of what was to become the most abusive school system in the world. Children were beaten, raped, even murdered, all in the name of “killing the Indian in the child” — a phrase borrowed from a US soldier, but which aptly described the intent of all the abuse. The residential school system was aimed at uprooting young indigenous people from their own cultures and, under the guise of “education”, forcing them to become essentially lower-grade non-natives. It taught them little, but what they learned most of all through it was helplessness. It failed utterly at assimilating the indigenous, but succeeded in making them easy targets for the non-indigenous predators of the future.

I mention this because one of those predators took advantage of the dire (but woefully common) situation Angela Cardinal found herself in: poverty. A condition too well known to too many indigenous women, and one that led to unimaginable horrors for her:

On a June afternoon in 2014, she was tired and hungry, with nowhere to call home. She convinced a tenant to let her inside a central Edmonton apartment building. She had no idea that Lance Blanchard, a career criminal, lived on the second floor.

Curled up in the stairwell next to a baseboard heater, Cardinal sang herself to sleep with “This Little Light of Mine”. But she awoke to a knife at her throat. Holding it was a six-foot-seven-inch, 260-pound convicted sexual predator.

At just over five feet tall, weighing only 109 pounds, Cardinal was at a clear disadvantage.

“Blanchard came out of nowhere, bat out of hell, grabbing me,” Cardinal testified.

She said he dragged her by the hair, up the stairs, to his dirty, cluttered apartment.

“He started stabbing me,” Cardinal said. “He said he was going to make me ugly and stick me in a closet and keep me. He started banging my head off the ground.”

Exhibit photos show Cardinal’s jacket and shoes on a blood-soaked couch. Blanchard held her at knifepoint, removed her clothing and fondled her.

“I felt disgusting,” Cardinal told court. “I wanted to get away as fast as possible, but I couldn’t. I was praying I would die before anything else happened.”

Blanchard grabbed electrical cords to tie up her legs. Court transcripts show he tried to stab her in the chest, but Cardinal put up her left hand to protect herself. Blood poured from a deep cut to her palm.

She made a run for the door, but couldn’t turn the knob with her slippery, bloody hands.

Blanchard was on top of Cardinal’s back when she pulled out a hidden phone, dialled 911, put it on speaker and threw it across the room.

The six-minute phone call to police was chaotic. On a recording, Cardinal can be heard screaming frantically in the background, “Help me. Somebody, help me. I’ve been stabbed.”

It took 27 stitches to repair the wound to her hand. Her body was covered with cuts. One eye was black and blue. Her neck was bruised from where Blanchard tried to choke her.

And this is the woman whom a judge ordered jailed so that she would not get away from testifying against her assailant.

Even though there was nothing to indicate that she would not co-operate, the court still treated her the same way the residential school system treated indigenous children: as forever wayward, unruly, and in need of a beating to make her act right.

Even though all her difficulty in testifying could be tied to her dire poverty and the trauma she suffered as a result of the assault that nearly killed her, white man’s “justice” still demanded that she be treated as a prisoner and a flight risk, rather than a victim in need of help.

And the most horrifying part is yet to come: The victim and the criminal were both imprisoned in the same jail. She was even transported in the same van as her attacker — “at least twice”!

If the judge were truly concerned about keeping them separate, as he claimed to be, why not let her go free? Why not let her stay with her mother, as she had intended to do? Can anyone imagine what was going through her head, not once but twice, having to sit in the same cramped paddywagon as her tormentor, unable to avoid seeing him, unable to evade his ugly, murderous eyes?

Women in general are treated badly by our so-called justice system when it comes to sexual assault, but indigenous women are treated infinitely worse than the general population. Institutional racism is piled on top of institutional sexism, and getting out from under it all is damn near impossible. And those who try are more likely to be punished all over again for “disobedience” than to receive the help they need, never mind justice for their abusers.

Little wonder, then, that Angela Cardinal dissociated and lost consciousness in court the way she did, even while being called upon to testify. When learned helplessness passed down through several abused generations is all you have to fall back on, that’s what you do! It’s not much of a survival skill, but it’s what is to hand.

And yet, that pitiful coping mechanism was not understood, but further punished.

Angela Cardinal did not survive to protest this injustice. Seven months after testifying at the prelim, she was shot dead in an unrelated incident. Manslaughter. The rapist, Blanchard, was tried and put away for life based on her early testimony, so he at least got something he deserved out of it all. Angela’s unimaginable suffering was not totally in vain.

As for the rest of us, the lesson is clear. If we want to do something about all the indigenous women in this country — not nation, country — who have gone missing and been murdered, we would do well to start with the so-called justice system we have inherited from our institutionally racist, institutionally sexist founders. There is nothing to amend here. We need to tear it down, and build something better in its place. A better system, with equal rights for all, where no one would even contemplate imprisoning a victim of rape in the same jailhouse and the same prison transport as her abuser, no matter what their color, no matter who they are.

I don’t know how we will go about it, I only know that we MUST. We have already lost far too many lives shilly-shallying.

Even just one is far too many.

This entry was posted in Canadian Counterpunch, Human Rights FAIL, If You REALLY Care, Isn't That Illegal?, Isn't That Racist?, Law-Law Land, Men Who Just Don't Get It, Sick Frickin' Bastards, Teh Injunz. Bookmark the permalink.