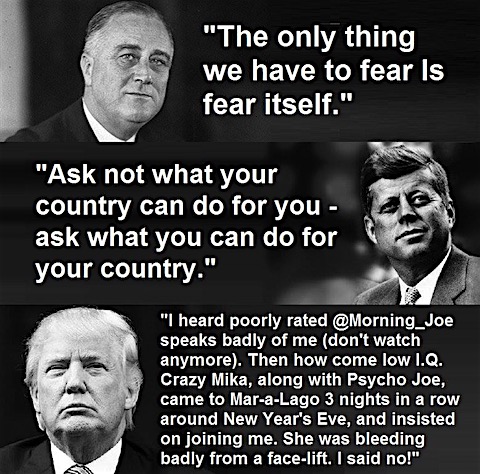 Crappy weekend, everyone! And a very crappy Canada Day to my home and native land. And an especially crappy one to Donnie, who’s just bleeding out his ears and his eyes and his wherever from that bad facelift he had. Or was it that bad scalp reduction? It’s hard to tell with Donnie, because any surgical thing he’s had done has not improved him. And here’s who else hasn’t improved this week, in no particular order:

1. Mitch Fucking McConnell. Not content to cut off the healthcare of everyone else, he’s also refusing to meet with the very group that (along with public medicine) was responsible for his recovery from polio. Is that any way to treat the March of Dimes?

2. William Fucking Todd Fucking Coontz. Why the double Fucking? Because that’s how hypocritical and greedy he is. And of course, he preached the so-called Prosperity Gospel, which holds that the rich are rich because they deserve to be, and God is rewarding them for it. Well, now he’s getting HIS reward: being indicted, and forced to render unto Caesar. Ha, ha.

3. Ron Fucking Johnson. I can’t even believe that this has to be said, but here goes: PEOPLE ARE NOT FUCKING CARS. THEY ARE FUCKING HUMAN BEINGS. THIS BULLSHIT IS FUCKING IMMORAL.

5. Andrew Fucking Scheer. Finally, after a public outcry, he distances himself from Kellie Fucking Leitch and her racist tweets. Too fucking little, too fucking late!

6. Rock Fucking Feilding-Mellen. Yes, little Tory scumbag, run as fast as you can from public criticism while Grenfell Tower still smokes and the bodies aren’t all located yet. You won’t get very far, unfortunately; Britain is a small island, and thanks to Brexit, it’s now that much smaller.

7. Inez Fucking Stepman. Who? Oh, nobody. Just some Phyllis Schlafly clonette in hipster glasses who got married yesterday and now thinks she’s dropping some Deep Politically Incorrect Wisdom on Marriage when all she’s doing is regurgitating the same “advice” women’s magazines have been giving to disgruntled wives since forever. And the sum total of it is, NO FAT CHICKS FEMINISM SUCKS GIGGLE GIGGLE AIN’T I CUTE. I suppose, on another day, I would be mildly annoyed by this tired old fetus-writes-advice-for-the-Internet nonsense, but I’m too busy catching up on my missed ZZZZZZZs. And in another five minutes, I’ll be all like “Who?” again. Because that’s just the way we old, unbothered fat chicks roll, bitch.

8. Nikki Fucking Haley. Special Snowflake sez WHAT? You wuz BOOED in Noo Yawk? Poor baby. Now you know how it feels to be queer in South Carolina!

9. Dan Fucking Picard. You’d let OD victims die to save money? Well, I guess I know what your city can do if you collapse with a heart attack or show up with cancer. You’re definitely of an age to be a high risk for both…or relapses if you’ve had ‘em before.

10. Kellyanne Fucking Conway. Willpower doesn’t work for weight loss, and it sure as hell doesn’t work on drug addiction, either. But for willful stupidity, it’s a charm! PS: It also doesn’t make spring green your color. Juuuust sayin’.

11. Justin Fucking Trudeau. Not only is he objectively pro-fascist, he’s now actually trying to convince the country that a three-and-a-half fucking kilometre sniper shot, in a country where our army ought never to have gone, is something to celebrate. On Canada Day, no less. How about a loud HELL TO THE FUCKING NO???

12. James Fucking Wiedmann. So, an all-white shindig is “a love letter to Heritage America”? That’s funny, it sure looks like a fucking bore to me. And I’m so white that I’m damn near translucent!

13. Joshua Fucking Feuerstein. Waaa, waaa, Facebook has a Pride emoji but no cross! That’s because you’ve already nailed yourself to it, you fucking moron. Get down from there, because you look like an ass and other people need the lumber!

14. Pete Fucking Olson. Meanwhile, in another corner of Right Wingnuttia, we have this guy…who’s so mean that he even begrudges his own wife healthcare, simply because something she might use is of no use to him. Well, dude, she doesn’t need prostate exams, but that’s no reason for her to abolish them, is it?

15. Paul Fucking Ryan. People will choose not to buy health insurance? Damn straight they will. When it’s priced out of reach, and it’s a choice between that and feeding themselves, what the fuck does anyone expect them to do? Stop resisting your bullshit scheme? Don’t make me fucking laugh.

16. Sarah Fucking Palin. Desperate to keep her name in the news? Yes, she is. So desperate that she’s now actually SUING the news for keeping her name in it. If only she could quit doing THAT halfway through, too…

17. James Fucking Isaac. Dude. Smashing a pane of glass at a Holocaust memorial isn’t going to wipe out what it stands for. It just makes you look as bad and as dumb as those who perpetrated the crime in the first place. But then again…I bet you’re one of those guys who think it’s clever to say things like “kek” and “cuck” all over the internet, like a fucking chicken.

18. Carl Fucking Benjamin. And speaking of dumb keks and cucks and menz that cluck: Yup, Carl of Swindon — alias Sargon of Akkad — made the cut this week. How? By sitting right in the front row as Anita Sarkeesian was speaking at VidCon. AND for expecting an “apology” from her — for “attacking” him by accurately naming him as a chronic stalker and harasser! Special dishonorable mention to the bungling idiots who let him (and assorted other InterNazis and allied scum) in. Don’t you people vet anyone?

19. Grover Fucking Norquist. Let’s hear it for the Father of the Year, folks…too cheap to buy his little daughter even a crappy guitar. Makes her save up for it herself. She finally scrapes together the exact amount, only to find out she’ll also have to pay sales tax. And then he tacks on an equally cheap, nasty “lesson” about government? Yup…he is well on his way to becoming the parent she won’t be speaking to anymore when she’s old enough to run as fast and far as her young feet will take her. Good job, Dad!

20. Matt Fucking Bevin. A “Bible Literacy” bill? I have a better idea, gubnor…how about a Treaty of Tripoli Literacy bill?

21. Marco Fucking Rubio. Mocking him is like shooting fish in a barrel, isn’t it? Nevertheless, he did kind of hand his interlocutors the ammo.

22. Piers Fucking Morgan. Same as #21, but with a British accent. Gotta love those own-goaling ammo-handers, eh?

23. Melania Fucking Drumpf. Yes, that’s right…the First Trophy made the list this week once more! And on so many levels, too: There’s her defunct (or never-existent) campaign against cyber-bullying, which her happens to be her husband’s only forte (well, that and icky sex stuff). There’s the fact that she didn’t really move into the White House after all, even though Barron is now done with his school year and that excuse is no longer valid. And then there’s the fact that she’s actually aiding and abetting Donnie’s bullying, both on and off the Internets. Does anyone in that shitty family ever make a promise that they actually keep, and which isn’t deeply and darkly shitty?

24. Alex Fucking Jones. Again with the child-slavery bullshit, this time on Mars. Tell ya what, Alex, how be we send YOU there…not to demonstrate their (non)existence, but just so no one on Earth has to be subjected to your inane babbling anymore?

25. Sarah Fucking Huckabee Fucking Sanders. Why the double Fucking? Because that’s how god-awful you have to be to get the man who killed Osama bin Laden to come gunning for YOU…with the facts.

26. Christy Fucking Clark. Finally, at long last, she has left the building. And it only took a fire crew and the Jaws of Life to extricate her, too!

27. Rush Fucking Limbaugh. The Deepwater Horizon disaster wasn’t so bad for the environment? Tell that to the people on the Gulf Coast. Particularly the fisherfolks who’ve lost their livelihood because the fish and shellfish from there are all too contaminated to eat, and too few to catch.

28. Kayleigh Fucking McEnany. Donnie Drumpf, “personable”? Oh, PLEASE. There is nothing to applaud here. How about you stop whitewashing Ol’ Pussygrabber, just this once? Even if it means saying nothing at all?

29. Dana Fucking Loesch. Beat those drums for civil war all you want, racist NRA shit-shill…but when the chips come down, you’re gonna be on the losing side, just like the original Confederates. And for the same reasons, too. Just remember that.

Nice white supremacist friends you got there, Jordie. Please, tell us more about how oppressed you are as an anti-PC white male who won’t use people’s stated pronouns to recognize their gender and all that shit. I hope this photo haunts you all the way to career oblivion, which is where you belong at this point.

And finally, to all the lovely, LOVELY fucking Tory senators who pissed on Mauril Bélanger’s grave this week by hating on the “clunky” gender-neutral new lyrics for O Canada. Funny how none of you objected to the idiotic makeover that the anthem got in the 1980s, when they inserted two REAL clunkers that totally warped it, in my eyes (and ears): a cliché (“from far and wide”), and theocratic overtones (“God keep our land”). But “in all of us command” is somehow “clunky” and sacrilegious and “an abomination”? Oh, fuck right the hell off. Especially YOU, Lynn Fucking “Residential Schools Were Really Good For the Kids” Beyak. Please spare us all the pious hypocrisies about “not watering down traditions” when you’re the same bunch who thought nothing of tearing indigenous children from their entire traditional society and culture to “educate” them in the ways of the white imperialist, and who resisted renaming the infamously-named Langevin Block for that very reason. You are nothing but a bunch of unevolved, obsolete dinosaurs, and frankly, you belong in the dust under Drumheller.