Wankers of the Week: Ding dong, Donnie is doomed

Crappy weekend, everyone! And an especially crappy one to Donnie, not that he needs to be wished it; he’s probably just glad that it’s over. We’ll be gladder when HE’s over. And here’s who else I wouldn’t mind seeing the last of, in no particular order:

1. Woody Fucking Allen. Oh my fucking gawd, just shut the fuck UP, you creepy, creepy little shit! No, really…SHUT. THE. FUCK. UP. Literally everything you have to say about sexual harassment and molestation is nothing but an indictment of Y-O-U.

2. Michele Fucking Bachmann. Oh my fucking gawd, she can just shut the fuck up too. If Donnie is a man of faith, why do we never see him praying? Or darkening the doors of a church? Or doing anything except cracking unfunny jokes about how LGBT+ people would all hang if Mikey Pence had his way? Which is, honestly, ungodly as hell.

3. Mike Fucking Huckabee. Oh my fucking gawd, Hucky Fudd…YOU too can shut the fuck up. If you can’t remember something that’s been all over the media since before the election, you are too senile and demented to be in front of a camera anymore.

4. Lars von Fucking Trier. Yeah, why hasn’t Björk appeared in any movies since that one (and only one!) she’s been in? Couldn’t be because she was working under a creepy molesty director too, could it? Nahhhhh. He even says so himself! Who you gonna believe, him or that lying bitch?

5. Richard Fucking Spencer. Oh looky, Dowdy Dickie has some ideas on women and voting. Hey Dick? I hope the next time someone punches you, it’s a woman…and she goes for your balls. PS: Ha, ha! I always did like my antifascism with a nice local microbrew…

6. Jim Fucking Bakker. If God’s gonna cut me down for mocking Jimmeh, She’d best get on with it. I haven’t got time for any more Great Disappointments.

7. Steve Fucking Scalise. The Founding Fathers “envisioned” massacres enabled by bump-stocks and the NRA? Really? Suddenly, I wish the dickweed who shot this dickweed had had better aim. And just what was that dickweed — or the one who shot all those people in Vegas — “protecting” himself FROM? No, Stevie, this isn’t about self-defence. Or freedom. It’s a vast protection racket. And guess what mafia is behind it.

8. Mayim Fucking Bialik. You call yourself a feminist and then you turn around and prescribe “modesty” as a means to avoid sexual harassment and assault? When women have been complaining forever that they still get hit on, even when dressed in shapeless sacks from neck to toe? SHAME. ON. YOU.

9. John Fucking Nolte. Because everything that goes on between peen and poon is somehow related to “status” in the sexist world of Bitefart, we get this guy, calling our denunciations of harassment and assault a “status symbol”. If you have lost the ability to even, just hashtag it #MeToo and tweet it at this motherfucker.

10. Anthony Fucking Scaramucci. Thought you’d seen the last of him, had you? Well, you haven’t. And thanks to the fact that his “news” outlet is blatantly antisemitic, you won’t be hearing the end of it (or its stupidly conditional nopologies) anytime soon, either.

11. Ivanka Fucking Drumpf. Kurt Cobain killed himself just so she could opine idiotically upon him and his music and the fashions of the grunge era, it seemed. Good thing he’s no longer here to hear that, or he’d off himself all over again, because she’s the epitome of the vapidity he railed against for most of his 27 years.

12. Alex Fucking Jones. Folks, the rumors are true. Or at least your suspicions might be, if you ever suspected that our favorite snake-oil peddler and tinfoil haberdasher likes to munch on old lead paint chips when no one’s looking. Because yeah, his super-duper-double-looper “supplements” are tainted with enough heavy metals to impede the growth of a child AND the functioning of an adult brain. And there’s no amount of tinfoil that can shield a vulnerable brain from THAT kind of damage. PS: Ha, ha. Bring on the drag queens, I love it!

13. Sarah Fucking Huckabee Fucking Sanders. Why the double fucking? Because that’s how much a chip off the shitty old block she is. Her dad is a total stooge, and so is she. And neither one of them is even good at it!

15. Jeff Fucking Sessions. So, just to recap: The Evil Keebler Elf is saying he intends to jail reporters. Presumbably for reporting, and accurately, on all the shitty skulduggery he and Donnie are up to. In short, he’s a First Amendment violator, as is his boss. Good to know…good to know.

16. Diane Fucking Black. She claims to have been an emergency room nurse, but ever since trading in her scrubs for a legislator’s seat, she’s been all about just letting poor folks die. And the most ironic thing is, she’s opposed to a law signed into effect by none other than St. Ronald Reagan, patron of bad economics.

17. Tony Fucking Perkins. No, dumbass, LGBT+ people in the military are not causing straight men to molest women. Those guys don’t need any help from anyone else, fuckyouverymuch.

That’s why. If you don’t want to go down in the ledger as a fucking hypocrite, the least you could do is tell the NRA to stop investing so much blood money in you.

19. Kellyanne Fucking Conway. WHAT fucking “haters” and “people of privilege” are trying to score political points here? Oh yeah…she and Donnie. Who the hell else? And as usual, they’re projecting like mad.

20. Paul Fucking Walsh. Well, well, looks like all the people who called the “Alt”-right a bunch of failed LARPers were more correct than they knew. Because whaddya know, here is an actual failed LARPer now, and guess who he’s also with?

21. Tracy Fucking Keen. Meanwhile, in Florida, the cleanup continues apace…punctuated by occasional racist outbursts, such as those emitted by THIS fucking moron. Who, be it noted, is NOT with any clean-up crew, but saw fit to insult them instead.

22. Cameron Fucking Padgett. Shorter: WAAAAAAA! Mommy, the beer company was mean to me when I tried to defraud them! Whatsamatter, little Nazi boy…did someone take away your brewski? Ha, ha.

23. Sandy Fucking Rios. Can’t invent a conspiracy theory to save your sorry ass? Then just pull something out of it at random, and tack the name of George Soros onto it. Done!

24. David Fucking Cross. And once more, some fucking asshole proves to the world that even if you hump a goat in jest, you are still a goat-humper. And the goat will not find you funny, either.

25. John Fucking Kelly. Pro tip, General: When you’re doing your damnedest to cover your boss’s ass, be careful not to show your own. And try not to soil yourself in public, eh?

26. John Fucking Garofalo. Meanwhile, in other news of men who disgrace their uniforms, we have this fake US Navy SEAL. Who was briefly in the navy, but never a SEAL. And finally exposed, fittingly, by the navy’s own newspaper. How embarrassing! But not nearly as embarrassing as his blind, idiotic worship of Donnie Fucking Drumpf, who never served, period.

27. Nick Fucking Kouvalis. Just like a bad penny, he keeps turning up: for Rob Fucking Ford (RIP), Kellie Fucking Leitch…and now, as a crapaganda operative for Christy Fucking Clark in BC. Gee, what were the odds?

28. Kathleen Fucking Hartnett Fucking White. Why the double Fucking? Because that’s how dumb you have to be to believe that carbon dioxide is “the gas of life on this planet” (only for plants, honey) and that established climate science is “paganism for the secular elites”. And of course, that’s also how dumb Donnie is for appointing this moron.

30. Bill Fucking Morneau. Newsflash, Bill: You’re a public servant. You answer to the public. And journalists, lest you forget, are doing the asking on the public’s behalf, so you answer to THEM, too, whether you like it or not. Now get off your high horse and come clean. 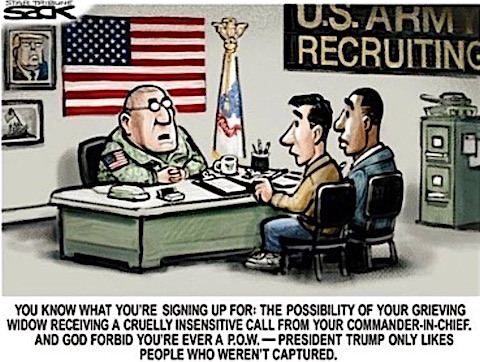 And finally, to all the fucking nimrods who still think there’s any point in “debating” fascists. What the hell for? They want people dead, and the three who were just arrested outside of Dowdy Dick Fucking Spencer’s little Freeze Peach shindig are all the proof we need that speech is not the issue — DEEDS are. And their deeds are frankly genocidal and murderous. Just like those of the ORIGINAL fascists.