Wankers of the Week: How do you solve a problem like Maria?

Crappy weekend, everyone! And a very crappy one to Donnie the Dotard, who decided that the best way to solve the problems caused by Hurricane Maria would be a massive crapaganda offensive, including touting the non-existent “miracle” of Las Vegas. Where over 50 people got killed and over 500 were injured by a gun nut run amuck. Yeah, some fuckin’ miracle. And here come all the other s’ain’ts, marching in no particular order:

1. Geraldo Fucking Rivera. Can’t see the Puerto Ricans dying for lack of aid? Well, Gerry, better put on yer glasses, then. And stick your head out the window. Because they’re all around you! PS: And this isn’t making you look better either, Gerry.

2. Victor Fucking Salva. Don’t believe the hype. He’s not a reformed child abuser; he’s a child abuser, full stop. Once a creep, ALWAYS a creep. And his latest casting call is proof.

That’s why. He just own-goaled himself with that dumb, sexist tweet. PS: This isn’t helping him, either.

4. Rush Fucking Limbaugh. The media don’t want to tie the Vegas shooter to Daesh because he has no such fucking ties, Rusty, you idiot. And if you want to know who the biggest terror group on US soil is, brace yourself: It’s white men just like YOU.

5. Bill O’Fucking Reilly. It’s been a hot minute since I’ve had Billo on the list, but what the hell. His gas-emitting ass has earned a place here right now, don’t you think?

6. Pat Fucking Robertson. And BAM! Straight out of the gate comes Patwa, with his own cockamamie theory about why the Las Vegas shooting happened. And no, it bears no resemblance, not even a casual one, to actual logic or reason. Much less the real reason the whole horror happened. Why the hell is this old coot not dead yet?

7. Sarah Fucking Huckabee Fucking Sanders. Why the double Fucking? Because that’s how dumb she is to think that mentioning the high gun-crime rates in Chicago (and its ostensibly stricter gun laws) will somehow distract anyone from the fact that Donnie and his Repug congresscronies are doing sweet fuck-all about gun crime themselves. And that they are, in fact, enabling more of it when they allow mentally ill people to own guns.

8. Kellyanne Fucking Conway. Hey, you know who else controlled the press so it would only report in his favor? Yeah. THIS guy.

10. John Fucking Thune. Shorter: What, ME do something about gun crime? No way, man, I’m just a lowly legislator in the NRA’s pocket! Oh, and have you tried ducking and covering? FREEDUMB!!!

11. Alex Fucking Jones. Aaaaand here he is, right on cue with the “scripted” and “crisis actors” bullshit. Where have we heard that before? Oh yeah: Right here.

12. Kevin Fucking Ward. Meanwhile, in Canada, we have a cop who busted gays for cruising in public parks…when he wasn’t too busy getting sexually inappropriate with teenagers.

13. Sean Fucking Hannity. Is that a threat I hear coming out of your tweeter, Baby Jesus? Wow. Some “unity” you and Donnie are all about! And if you wanna really see despicable, just look in your own fuckin’ mirror.

14. Mick Fucking Mulvaney. No, you know who needs to fix their debt problem? YOUR FUCKING BOSS. He OWES Puerto Rico $30 million for the bailout for his failed golf resort there. And he also owes Washington for all the golf he’s been playing and all the bullshit he’s been tweeting on the taxpayer dime.

15. Steve Fucking Scalise. Why won’t the media report the good news about guns, he asks? BECAUSE THERE FUCKING ISN’T ANY, YOU NRA-BOUGHT TURD. Sorry for the ALL FUCKING CAPS shouting, but DAMN this guy is dumb. And dumber still if he thinks we can’t see that he is peddling an ideology and a political line, NOT a lack thereof. He was paid to say that, people. 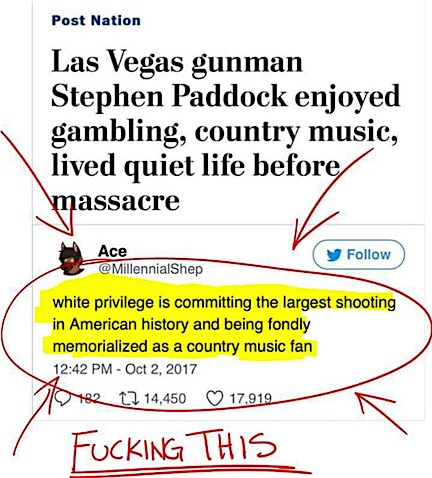 16. Dana Fucking Loesch. And speaking of paid to say stupid shit, can we talk for a moment about her? She was paid by the NRA to spout that sewage. They should have paid her to dummy the fuck up, because DAMN, that dame is dumb, too. If you REALLY don’t want to “politicize” a tragedy, then STOP USING IT TO SELL YOUR FUCKING GUN NUT AGENDA!

18. Karyn Fucking Draper. And speaking of dumb candidates, how about this one? She went so far as to blame LGBT+ people for terror attacks. Yeah, that’ll work! And pay no attention to all those MUSLIMS who happen to be LGBT+, either!

19. Dan Fucking Bilzerian. Pro tip: Don’t try to be a hero, or even LOOK like one, when you so plainly aren’t cut out to be one. I won’t even advise you to stick to your dumb selfies and jackass stunts. I will only advise that you delete your entire presence from social media, go out and get a real job, and try to live like a normal person for a change.

20. Dave Fucking Daubenmire. And of course, he has a cockamamie conspiracy theory blaming the Vegas shooting on God. Because of course he does.

21. Melania Fucking Drumpf. Nice to see that being married, and a so-called FLOTUS, hasn’t hurt her modelling career in the least. Nor, for that matter, have a couple of hurricanes. Of course, there’s still that pesky emoluments clause, which I’m pretty sure can be interpreted to mean that she’s not allowed to profit materially from her position in this manner.

22. John Fucking Edgar Fucking Rust. Why the double Fucking? Because that’s how close he comes to my mental image of a typical 4chan user: Pizza face, stupidly angry at the world, Reddit racist, registered sex offender, and oh yeah…a death threat utterer. Which is a crime, of course. But since he only managed to utter the threat (from a chain restaurant!) and not carry it out (thanks in no small part to the “po po”, as well as his overall lack of smarts), he’s just a pud-pullin’ sad-sack wannabe badass who is himself every bit as dumb as he accuses black folks of being. Which is also my mental image of a 4chan user.

23. Marsha Fucking Blackburn. Well, here’s a refreshing twist: She actually BRAGS of being, and I quote, “a knuckle-dragging wingnut”. You forgot WANKER, dear!

24. The Fucking Chapniks of Forest Hill. A Tudor stone house? What a fresh and exciting concept! …said NO architect ever. Also, pretty sure that an unoriginal idea can’t be copyrighted, much less for the purpose of a frivolous vanity lawsuit over alleged drops in property value.

25. Donald Fucking Drumpf, Jr. Dude, nobody created an “atmosphere of hate” towards your old man. He did that himself by farting up a storm, courting the “alt”-right, and stoking every fear and hatred there was in the populace. Did you sleep through his election campaign in your wet pants, or what?

26. Chris Fucking Mudgett. Never mind that 59 people got killed and over 500 injured when some motherfucker snuck two fucking dozen guns into the Mandalay Bay Hotel and Casino in Vegas and fired down on a country music concert from the 32nd floor. No sense being sensitive or tasteful when you’re the managing editor of Guns & Ammo, eh? And you have just that kind of shit to peddle to your loyal murderous idiot readership, EH???

27. Chuck Fucking Grassley. Is that an attempt at obfuscation I smell? Cleverly disguised as an attmept at clarification? Why yes, it is! And it smells just like a pee-soaked mattress in a fancy Russian hotel room, too!

28. Tomi Fucking Lahren. Snowflake sez WHAT? She’s sick of people looking down on the right-wing gun nuts who make up her ever dwinding (and aging, and dying) audience? Well, ain’t that just special. Listen, White Grievance Cheerleader, I’m fucking sick of YOU. I’m sick of your entire idiotic ilk. And I’m sick of you supporting the kind of guy who fired from the 32nd floor of the Mandalay Bay Hotel, looking down on a bunch of innocent music fans who were doing nothing to him. A guy who, it turns out, was probably a member of YOUR viewing demographic. People are dead because of your precious Second Fucking Amendment. At long last, have the common decency to shut the fuck up and go the hell away.

29. The Fucking Pope. Yeah, that’s right, the usually wiser ol’ Frankie made the list this week. Because he still doesn’t get that transgender Catholics exist, and that their “rejection” of what sex they were designated at birth has nothing to do with God.

30. Gavin Fucking McInnes. Of COURSE he celebrates the Vegas Massacre. Because he’s the scum de la scum of all shitty people. So of COURSE he would!

And finally, to the fucking NRA. Yes, all of it. Every last member who hasn’t yet cancelled their membership is complicit, and every last gun manufacturer who supplies it with money and influence to peddle in Washington, too. You all are MURDERERS. Stop screaming about rights, because it’s obvious that you don’t care about those at all. Just dry up and blow away with the fucking tumbleweeds, because I’m sick of ALL your shit.