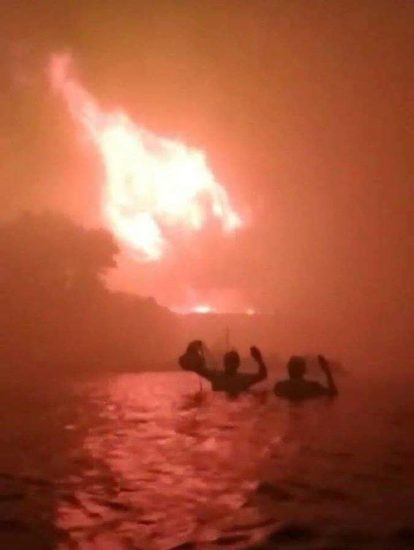 People escaping into the sea from wildfires near Attica, Greece. Original source unknown.

Well, folks, I guess we can now declare Christian charity dead. No one knows where or when exactly it bit the dust, but at least in one Greek Orthodox cleric’s heart, it’s officially crumbled to ashes and cinders:

We all know that being spiteful is a bottomless pit. And it is confirmed for one more time on the day where Greece mourns at least 50 people among them many children, dozens of injured and missing. People who lost their lives in the Greek tragedy called “Athens wildfires.” This time the confirmation of being as spiteful as possible till the end of your days comes from the lips of a man who claims to be one of the Holy Men of the Greek Orthodox Church, no other than Metropolit Amvrosios.

The holy man with endless hate in his soul was not ashamed to claim that the wildfires were the wrath of God for an atheist prime minister.

“Atheist Prime Minister Alexis Tsipras draws the wrath of God,” Amvrosios writes in capital letters his blog on Tuesday afternoon and adds “Greece is damaged from rain and fire!”

Well, how do you like that? Abandoning all logic (that’s a Greek word, by the way), the good metropolitan has decided to blame, not climate change or global warming or an unseasonably dry summer, as any thinking person might, but a socialist prime minister who hasn’t seen fit to darken the doors of a church lately. Probably because he’s too busy running a country, trying to stave off yet another economic crisis — which is also a Greek phrase — as well as answering a migrant refugee crisis which happens to be ongoing.

One would think that anyone with even a cursory knowledge of all the duties Alexis Tsipras has to attend to would forgive him for acting irreligiously, and placing the needs of his fellow Greeks (and all the foreigners in need flocking to Greece) ahead of the exigencies of God (or at least, those who presume to speak for God). Christian charity, one imagines, should reign supreme in the hearts of churchmen. But not Amvrosios:

Citing the Holy Spirit as quoted in the New Testament Amvrosios notes his conclusions:

“In times of distance from the path of God will manifest his wrath with various natural catastrophic events such as earthquakes, famine, epidemics and illness pestiferous, bloodshed, criminality, devastating fires, smoke cloud that will go up to the sky!

“Who, I wonder, is responsible for distancing the Modern Greek from God’s path? Who else? The atheist Prime Minister, Mr. Alexios Tsipras and his Associates: Here are some of their accomplishments,” Amvrosios writes and posts a long list of ‘atheism’ achievements.”

He starts from the fact that Tsipras has neither “baptized his children” nor “married his girl-friend.”

Then he accuses the prime minister and the Associates for having abolished the religious oath for cabinets ministers (not true!), removed Crosses and Icons from schools and public institutions, have scrapped the morning prayers in schools, legalized civil partnerships for same-sex couples and allowing pride parades, spread nudism and immorality, and also criminality of anarchists’ Rouvikonas.

I have no idea what Rouvikonas are, but they sound positively ghastly. At least to hear Amvrosios tell it. Personally, though, I’m kind of a fan of anarchism (another Greek word, BTW, one simply meaning “no ruling class”).

It’s pretty amazing in this day and age to hear a leading churchman descend so openly into rank superstition and frank wickedness. You would think that since Christianity is now 2,000 years old, it might have evolved a bit since the Dark Ages, but nooooo. At least, as far as Metropolitan Amvrosios is concerned, it’s still firmly stuck in medieval times.

I hereby note that orthodoxy is also a Greek word. And so is idiot.