Dear Don Cherry: This is why you (and your fans) are shit. 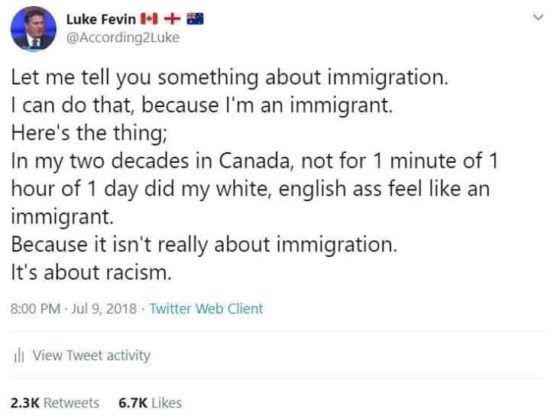 If you’re white — and more to the point, ANGLO white — you’re automagically accepted here in Canada. Everyone else, not so much.

So, Don Cherry, you’ve been fired. After some 40 years of boorish blather, which illuminated nothing about hockey except how much of a contributor to the game you haven’t been, you’ve finally been broomed out. And most Canadians aren’t sorry to see you go.

If you must wonder why that is, Don, you haven’t been paying attention.

You see, Don, the composition of this country’s population is changing. That’s no news; it’s been doing that since before you were born. (And that’s not a bad thing, either.) But now, you’ve finally been held accountable for the ignorance you’ve shown to a portion of Canadians who have always been struggling against the prejudices of old, cranky, pompous bigots like yourself. Sexist prejudices; racist prejudices; religious prejudices; and even prejudices in favor of violence and thuggery over such outlandish concepts as, gasp, FAIR PLAY.

I know you’ve never been big on fair play, ol’ son. It’s so obvious in the way you’ve slagged the Russians, the Swedes, the Finns, and anyone else who actually plays hockey, rather than just dropping their gloves and treating the crowd to a bare-knuckle boxing match. You’d much rather see the ice stained red and littered with spat-out teeth. You’re the reason behind Rodney Dangerfield’s old crack: “I was at the fights last night and a hockey game broke out!” In your view, anyone who can’t punch their way to victory, as opposed to actually skating, passing, shooting and scoring, isn’t a Real Man™. They’re just worms to be crushed.

And never more so than when those worms aren’t white and anglo.

Which brings me to this story, of a young hockey player who would like nothing more than to play…and who is in danger of being permanently bullied out of the game by racist thugs:

The first time Zachary Sukumaran was called the “N-word” on the ice, he was 12 and didn’t know how to react.

He told his father on the car ride home, and his father brought it to the attention of minor hockey officials. The boy on the opposing team was suspended for the balance of the season.

The family hasn’t taken it that far every time Sukumaran, 17, a forward for the Millbrook Stars midget rep team, has been slurred. It’s happened at least once a year since.

But on Tuesday night, in a game against Woodville, when Sukumaran was told by an opposing player, “Go back to where you came from, you (expletive deleted) immigrant,” a breaking point was reached. Sukumaran grabbed the player and threw him to the ice.

Officials intervened and Sukumaran told them what was said. The end result was Sukumaran was ejected from the game and no penalty was assessed the opponent. The referees said they didn’t hear the slur so couldn’t do anything about it.

Sukumaran has heard that before. Frustrated, he punched the dressing room door and broke his hand. He’ll be sidelined for six weeks.

Sanj Sukumaran said he’s been told the Woodville player has been suspended, but he doesn’t know if it was by his association or the OMHA.

Sanj says his son’s response was inappropriate and he has no issue with his son being ejected. His concern is that these incidents keep occurring. At midget, he said, players are told not to fight, and if they do, there are consequences.

“We don’t do the same thing for this kind of ignorance and racism. It’s something we are a little afraid to approach sometimes,” he said.

See, these are the consequences to the patented Don Cherry “Rock ’em, sock ’em” approach. And they don’t fall on those who deserve them the most. The only victim here is the kid who retaliated in frustration because he’s been called racist slurs every single year that he’s been out there on the ice.

Ironically, though, he wasn’t helped by the approach that used to fly on Coach’s Corner. Maybe it’s because that rockum-sockum approach is only truly effective (or permissible) if you’re racist, anglo, and white? ‘Tis a puzzlement.

What’s not so puzzling, though, is where the kid he fought got the message that it’s “fair play” to call an Indo-Candian an n-word (and an “immigrant”, even though, like Bad German me, he was born here to immigrant parents). He got it from an old white guy with a loud, ugly voice and a louder, uglier suit, who isn’t at all shy about his disdain for anyone who’s not an “old stock” anglo-Canadian. Hey, if a former big-league hockey coach thinks that there’s a bunch of “you people” who deserve to be looked down upon and shamed for whatever flimsy reason, it must be okay to make a visible one of those “you people” feel unwelcome even when playing that most quintessential Canadian winter sport. Eh?

It was, in fact, NEVER okay. There may have been a time when it passed without comment or objections, but that time is long over. Even now, it’s still claiming victims. And that, too, has to stop.

Don Cherry has done a lot of trashy things in his time, but the worst one was to perpetuate the not-so-tacit belief that racism and violence, ostensibly in the service of country and sport, were okay. His supporters share that belief, and like him, they’re loud and proud about it. Scratch a Don Cherry fan, find a racist, a fascist, a xenophobe, a warmonger, a bigot. And you don’t have to scratch deep or hard; they squall like scalded cats the moment they feel someone else’s fingers making contact.

They may think they’re a silent majority, but they’re a vocal minority. And they are poisoning what should be a game that everyone can play, on a level field, peacefully and with respect.

And if they wonder why the rest of us think they’re shit, they can stop wondering now.

This entry was posted in Angry Pacifist Speaks Her Mind, Bullies, Canadian Counterpunch, Crapagandarati, Fascism Without Swastikas, Filthy Stinking Rich, If You REALLY Care, Isn't It Ironic?, Isn't That Racist?, Men Who Just Don't Get It, Merry Old England, Not So Compassionate Conservatism, The Hardcore Stupid. Bookmark the permalink.