Ladies! Do you still need feminism?

Some mornings it’s just not worth gnawing your way out of the restraints, is it? I mean, with shit like this popping up in my Facebook feed, it’s enough to put me permanently OFF my feed: 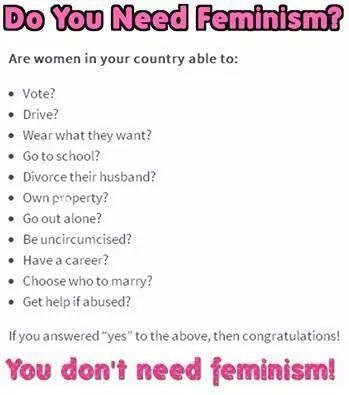 Congratulations, ladies! Your fight’s over! You won! You don’t live in Saudi Arabia! (Sorry, Saudi ladies, you’re screwed. The dude who wrote this drivel isn’t about to lift a finger to help you.)

Of course, this meme is bullshit because we still DO need feminism. Because in NO country in this world is it entirely possible for women to do the following:

Fully and freely decide when, if and how we will bear children. Men, particularly lawmakers, are still interfering with our right to reproductive self-determination. They are restricting our access to good health care, especially abortion (but not limited to that, by any means). Worse, a “Quiverfull” mentality is taking over in North America, and women are being denied the right to use birth control…because “God says so”, apparently. “Freedom of religion” is becoming a Damoclean sword held over our reproductive organs.

Walk down the street unharassed, every day, no matter what we’re wearing. Even women who are fully covered, in burqas, face harassment. And they face it from the same “enlightened” white men who wrote the above drivel. In fact, those men are the ones most likely to try to strip away these women’s efforts at privacy. As for women who don’t cover up…well, they get treated like they asked for harassment. Nobody asks for that; we just get it every day, for nothing…because we are women and girls.

Grow up and attend school unmolested. Same deal as above, but with an added dollop of interfering with our educations and stunting our career prospects from an extremely early age.

Work at any job we like, with equal rights, equal respect, and equal pay. Women are still getting harassed out of male-dominated fields. And underpaid, too. What a pity we can’t grow penises on command to prevent that!

Work at any job we like, without being sexually harassed on the job. Yes, even here in Canada, this shit STILL happens, and I can’t believe we still have to protest it. Jian Ghomeshi is hardly an exception. He’s the boss from hell that many women in many different fields have had, still have, and probably always will…until someone decides to do something about it.

Be in a relationship without violence. And by violence, I mean the kind inflicted by males upon females. The kind that enforces male supremacy and patriarchy.

Be free from sexual abuse at home. Girl children are more likely to be sexually abused growing up. And not by some stranger in the bushes, either. The culprit is typically a male relative, and he typically gets away with it, because women and girls are still being regarded as property, and his to do with as he will.

Go on dates without having to fear that our dates will sexually assault us. When we have to watch our drinks (or stir them with a finger to see if our nail polish changes color), that’s a sign of severe inequality right there. When’s the last time you heard of a woman drugging a man that way, in order to have her way with him? Not often? Not ever? Funny, because that happens to us all the time. College women even have to avoid frat parties, because this is likely to happen to them there.

Be able to report a physical or sexual assault or an incident of harassment and be immediately, completely taken seriously. And believed. And not taken further advantage of it by leering sexist pigs who think we’re “fair game” because we’ve already been through it.

Be able to report a physical or sexual assault or in incident of harassment…and actually see justice done. Because even if we report, are not blamed, are taken seriously and believed, the conviction rate for such crimes is shockingly low. Like, lower single digits low. This is inexcusable and happens with no other type of crime.

Enjoy representation in democratic government that is equal to our percentage of the population. We are 51% of humanity everywhere, but we do not have 51% of the seats in government. Not even in Iceland and Sweden is this the case, and they’re way ahead of everyone when it comes to gender equality!

Yeah, I’m sure we don’t need feminism anymore. Especially since we no longer have to deal with attitudes like this: 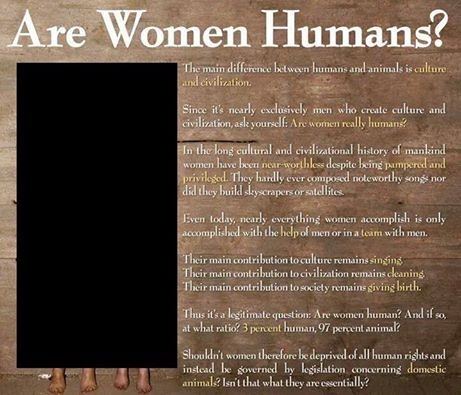 I mean, I thought this question was settled with a resounding YES here in Canada, way back in 1929. Before that, mirabile dictu, we were still not persons here, at least in the eyes of the law.

But apparently, some guys somewhere are STILL asking this inane question, even now, when it should be obvious that if women were not human, men wouldn’t be able to interbreed with them. If the answer to the question were No, then we wouldn’t be producing children; we’d be producing mules. If we were producing anything at all, that is.

As for the rest of that meme, it’s just as bad and worse. It is designed to minimize the many and crucial roles women have played throughout the history of civilization. We have always worked outside the home, often much harder than any man. We have produced important things on our own, without the help of any man. Skyscrapers and satellites? Well, gee, maybe women WOULD have produced those, too, if they hadn’t been harassed and hounded out of traditionally male careers like science and architecture! Why are male achievements privileged so much above those of women…especially things women have been doing since humanity stopped living in trees and grunting? If women aren’t human, then neither are men…and the dude who horked up this hairball clearly hasn’t evolved beyond the australopithecine stage.

As for giving birth being our main contribution to society: Well, so what? It was the only one explicitly and consistently ALLOWED us. Where did you come from, O dude who made this — fully formed from the head of Zeus? Nope. You came out of a woman’s belly after up to nine months’ gestation, probably by way of her nasty-wasty cootie-ridden vagina. Same as every other sooooper-fucking-genius male. Half your DNA comes from your mother. So does the X chromosome in every one of your cells. Even though you hate and despise her, hold her in utter contempt, and are keen to minimize the role she and every other woman plays in your life, the fact is, you can’t live without her. And this is how you repay her? You fucking parasite. You should be bowing down in gratitude that she didn’t abort you. Or leave you to die of exposure on a hillside.

And if we are so “pampered and privileged”, why are we deemed “near-worthless” and fit only to be denied all our inalienable human rights? Does this asswipe seriously believe that women are better off in chains, and that humanity would be better off that way too? Because the picture, which was blacked out by the anti-MRA Facebook group that posted this, showed the women naked and in chains. Hell, even in Saudi Arabia, women are treated better than that!

It’s very telling, isn’t it, that some men can only assert their “rights”…by denying us all of ours. And this in the supposedly “free” countries where we allegedly have so many…and yet, not nearly enough. Because no one — NO ONE — is suggesting that men be treated the way we have been for centuries, much less stripped of all THEIR rights.

Yes, we still need feminism. And as long as memes like these exist, along with the assholes who made them, we will continue to need it badly.