Argentina: The myths and meanings of the Nisman case 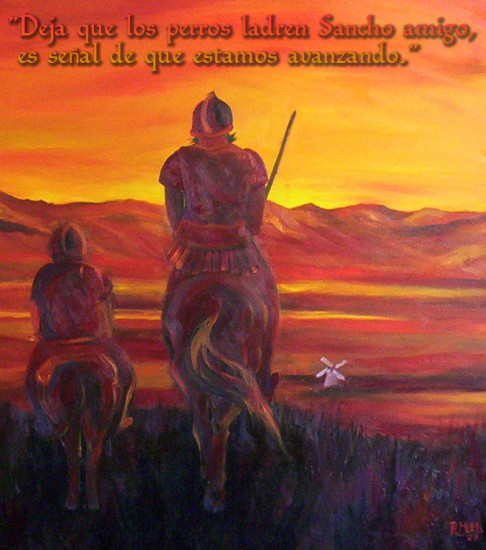 “Let the dogs bark, Sancho, my friend; it is a sign that we are advancing.” — Don Quixote

Right now, the US media is in full cry, blatting about how Alberto Nisman wanted to arrest the president of Argentina just before he died. As though that were somehow “proof” that she “had him killed”. Never mind that the arrest order in question was actually found in the trash, strongly suggesting that he had thought twice and decided against it, and that all physical indications at the scene (and on the body of Nisman himself) point to suicide. No, it’s obviously a murder, and it’s been done to cover Iran’s ass for the AMIA bombing, according to the crapagandarati!

At this point, it would be instructive to actually place the whole kerfuffle in its proper context. And to help us do so, here is Carlos Aznarez, sorting out the meaning from the myths:

A couple of questions to begin with: Reader, do you recall the bombing by Colombian airplanes, with tactical support by the CIA and the Israeli Mossad, against the encampment of FARC commander Rául Reyes, in Ecuador? It was during the first days of March 2008; Reyes was vilely assassinated on orders of the duo, Alvaro Uribe and Juan Manuel Santos. And from that moment a huge novel was spun around Reyes’ computer. There was much made of the topic, since from the moment the supposed data the Colombian intelligence services “had found”, homes were raided and numerous militants detained, under the excuse of having committed a thousand and one outrages “in the service of the FARC”. Time was passing and the great majority of the accused were absolved since, as often happens in these cases, everything designated as “criminal” was false suspicions, rampant lies, pure smoke.

With this guy, Alberto Nisman, something very similar happened. The man, it bears repeating, was only the pawn of an international strategy to condemn the Islamic Republic of Iran. And in turn, carrying out the orders of his Zionist bosses in the difficult and much-thumbed AMIA case, in order to pronounce in favor of the decreed “Iranian lead”, against various fighters of the Revolution that toppled the pro-Yankee Shah.

An agent of Mossad and the CIA, the said Nisman dedicated himself for all those years to accumulating malicious rumors disguised as “A-1 information”, with an eye to what his monitors in Tel Aviv and the US Embassy ordered, and his handlers from the SIDE whispered to him. In that compendium of gossip and distracting moves, Nisman could not connect in a decade and a half even one element which might have been taken seriously to tackle the difficulties which prevented them from finding those actually responsible for the attack. Or demonstrate, as many politically incorrect people think, that it they attacks were (including that on the Embassy) “false flags”.

With the spy, Jaime Stiusso, as his Deep Throat, and his intimate friend Lagomarsino as an extra, Nisman mixed water with oil and the result was a nonsensical summary. One day he took up against the Iranian cleric Moshen Rabani, whom he stigmatized without any proof (save the hatred and islamophobia which Zionism cultivates), another he took as true the wiretaps (330 disks) provided by the SIDE (pointing to Luis D’Elía, Fernando Esteche, Yusuf Khalil and…the list goes on) and on other occasions, he took up against various functionaries whom he connected to cover-ups. If there’s anything left to add, they also attacked Hugo Chávez, his former ambassador Roger Capella, and the Bolivarian Revolution, whom Nisman and his SIDE buddies accused, and Clarín and Infobae, among other media, took advantage to beat up on them.

In that great sea of judicial barbarities, worthy of the summaries which Baltasar Garzón was elaborating in Spain, Nisman thought he was skating on solid ice, and that nobody would pull it out from under him. The man did not foresee that his chiefs now considered him to be a played-out pawn, and promptly (and not by coincidence), a few days after the operation (also suspected of being a false flag) against Charlie Hebdo in Paris, they gave the order that he raise the bet. Now it was not enough for them with the wiretaps and the whispers in the ear by Stiusso or Lagomarsino; this time they had to involve the president herself, and her minister of exterior relations. Just them, and very ungratefully on the part of Nisman, whom they had protected so much from 2003 until the days of the Memorandum, when they fell into misfortune thanks to the decision of Netanyahu and his select group of killers. Neither the permanent “declaration of war” on Iran by the government, nor the presidential couple’s visits to the World Jewish Congress in New York, nor the persistence of Interpol red alerts to pursue any distraught Persian, would suffice. When the disciples of Theodor Herzl turn thumbs down, the least that comes out of their mouths is missiles.

The rest is known: As an obedient soldier of Mossad, Nisman left his daughter in the lurch in Madrid, and at the hands of Lanata, Magnetto, Morales Solá and all; the regiment of those loyal to the USA erupted like a tornado in the hot January of Buenos Aires. His friends in the press trumpeted: “The government is to blame” and “its days are numbered”, they bayed. However, the prosecutor realized that his 350-odd folios wouldn’t even do for confetti, and surely, at any second, he sensed that night was falling on him and that he was “more alone than one”, as the saying goes.

After that, things sped up, and the accusatory circus ended in a funeral.

In reality Nisman was already dead before taking the plane from Madrid. It doesn’t matter whether they killed him or he killed himself, the important thing is against whom his death was plotted. “Coup d’état,” wrote Alfredo Grande, with sure aim. “Power struggles and not those of those at the bottom,” he added, lucidly, the popular militant. But as well, a high-flying international operation, using a single shot (from a .22 pistol, on top of everything) to poke holes in Argentina’s sovereignty, put Iran back in the crosshairs, and strike a blow against the anti-Zionist, pro-Palestine and anti-racist movements. All for the same price.

From then on and up to now, the greater part of the population (spurred on by the terrorism of the media) believes that Agent Nisman was killed by the government, the rest doesn’t know or won’t answer, and a fringe, among whom lamentably there are a certain number of leftist militants, confused or opportunistic, not telling us that they defend Nisman, but coming very close to it. As proof there are their malignant utterances on social media or corporate TV, against the popular militants attacked by Alberto “Mossad” Nisman.

Meanwhile, no one is calling on Stiusso to testify, who continues at his job, as if he were not the reason why journalist Miguel Bonasso, in his latest book, warns of him and asks how it is possible that no one is touching him. Three or four days later, the government intervened in SIDE and threw the super-spy out in the street, unpunished. On the other hand, the victims of AMIA are sick of everyone lying to them and demand that the guilty parties appear at last (the real ones, and not those whom the genocidal Israelis want).

After many intrigues, the government dissolved the SIDE, and called for the creation of another structure, which they will obligatorily fill with the same people as before, for which reason nothing good can come of that measure. It won’t be Stiusso (as one can imagine), but others like him, accustomed to spying, sowing discord, accusing falsely, persecuting, creating projects X or Z, and even prefabricating attacks. They are already imagining “new” and dangerous scenarios.

Amid all this complicated panorama, one important fact: Strategic alliances between Latin America and China and Russia are still advancing. Two other details to bear in mind when imagining for what reason Washington — following co-ordinates set for the whole continent — supports, without any kind of subtlety, changes of government. Including in those which until yesterday it considered to be their own forces.

“It doesn’t matter whether they killed him or he killed himself, the important thing is against whom his death was plotted.”

In fact, it doesn’t even matter if “they”, whoever they are, made him kill himself. Driven-to-it suicides, like false suicides and frame-up murders, are a common thing in the land of spooks. In the end, the exact identity of the killer might be a mystery, but not the killer’s ties, or their cause.

As in my previous article on who stands to benefit from the Nisman case, this bears repeating: Cui bono? Cristina Fernández doesn’t come off better for his death, so clearly it was done not to cover for her, but to spite her. After all, she is fighting off the US vulture funds who are trying to extract yet another pound of flesh in Argentina right now, and the US media therefore has it in for her, big-time. The same goes for the government of Iran, which has had to fend off the “terror sponsor” image ever since the Revolution kicked out the Shah. Iran is currently in the crosshairs for yet another US oil war, and more so since Iraq has become politically unstable since the last one.

For whose benefit was it, then? All signs point, as always, to Israel, to the Mossad and Shin Bet, and to the Likudniks, who never hesitate to profiteer on the back of terrorism. And who are not averse to staging a false-flag incident of their own, if it benefits them.

Or a dozen, come to that.

This entry was posted in Barreling Right Along, Crapagandarati, Don't Cry For Argentina, Ecuadorable As Can Be, El NarcoPresidente, Fascism Without Swastikas, Huguito Chavecito, Spooks, The United States of Amnesia. Bookmark the permalink.