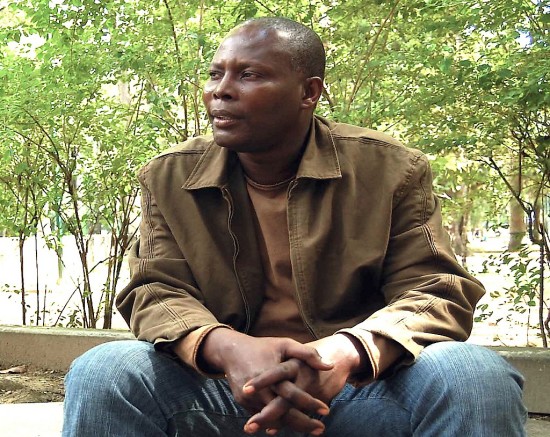 Fritz Saint Louis was a bright hope for his people in a bad time. And like so many bright hopes in Latin America and the Caribbean, he met with a violent and premature end:

The activist, who lived in the Vía Santa Lucía in Valles del Tuy, was there with his family at the time several hooded individuals entered with a shotgun and fired on him.

Saint Louis was a political activist dedicated to the struggle for the rights of Haitians in Venezuela as well as his native land, and a founding member of the Committee for Solidarity with Haiti, as well as international co-ordinator of the Casa Cultural Haitiana Bolivariana de Venezuela. He was an authentic revolutionary, a great fighter for human rights, and a great defender of the Bolivarian cause.

He was a student of Haitian history and the Haitian diaspora in the world, and the historical causes and politics of social reality of the Haitian people.

Fritz Saint Louis was an assiduous collaborator with Aporrea and a great friend of this house.

Ever onward to victory, Fritz.

Fritz Saint Louis’s murder recalls that of Robert Serra, the young parliamentarian who was killed in his home too by an armed band of Colombian mercenaries. Serra was well on his way to popular leadership in the PSUV, and probably would have become president one day if he had been able to continue. Putschists stopped him in his tracks.

That seems to be the overall plan for political assassinations in Latin America and the Caribbean anyway; has been for decades. For as long as the CIA has been active in the region, they’ve been in the business of killing hope (to borrow the title of William Blum’s book on the subject). About the only one they’ve so far been unable to touch is Fidel Castro, and for that they can thank their own government and its embargo, as well as their own comical incompetence, and of course old Fidel’s sheer wiliness and the loyalty of his own people (which they’ve often underestimated, much to their detriment). It seems natural that they would therefore turn their sights toward lower-hanging fruit: Robert Serra, Fritz Saint Louis…and quite possibly Chavecito, too, whose mysterious, aggressive cancer killed him three years ago.

But since it’s infinitely easier to send gunmen to dispatch lower-level leaders, ones who can’t afford squadrons of bodyguards like Chavecito had, it’s also easier to stage outright terror-murders in their cases, instead of making it look like natural causes (as they failed to do with Fidel, but apparently succeeded in doing with Chavecito). The purpose of murders like Robert Serra’s and Fritz Saint Louis’s is straightforward and simple: to scare others away from even TRYING to emulate them. The subtext, unspoken but plain as day, reads: If you try to do what they did, this is what lies in store for you.

What the right-wing oligarchs who contracted these killers forget, however, is the words of Túpac Katari: “Tomorrow I will return, and I will be millions.” Because it’s Latin America, where the martyrdom of one today is the movement of millions tomorrow. To avenge, yes…but also to bring long-overdue changes and freedom for the people. You can kill one or two, sure, but you can’t hope to win against an army of millions.

May the assassins fail in their purpose. May they be captured and unmasked soon. May their paymasters also be found and brought to justice. May Robert, Fritz and all the others be vindicated.

This entry was posted in Cuba, Libre (de los Yanquis), Fascism Without Swastikas, Filthy Stinking Rich, Huguito Chavecito, I Left My Hat in Haiti, Isn't That Illegal?, The United States of Amnesia. Bookmark the permalink.