Wankers of the Week: The Drumpfocalypse Inches Nearer 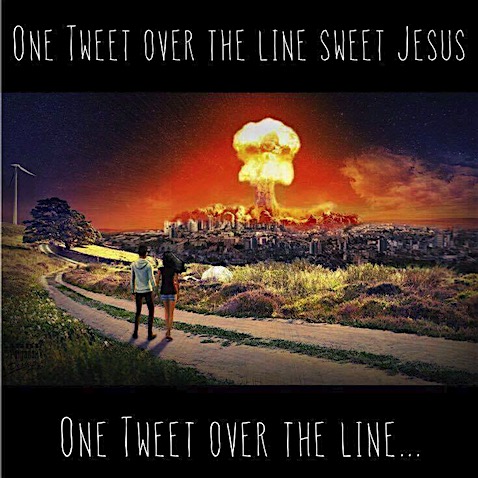 Crappy weekend, everyone! Brace yer ovaries and grab yer rosaries, the global nightmare is lurching closer every day. It’s Friday the 13th, Flight 666 has landed safely in HEL, and that’s not the scariest part. It’s now just one week until THAT DAY. You know, the one in which the US as we know it (shitty and imperfect as it so often is) commences its long journey down the black hole of the Space-Time Continuum? Yeah. THAT day. Everyone knows it’s gonna suck, the question is only how hard. As for the following, well…we already know just how much THEY blow:

1. Katy Fucking Talento. For the umpteen thousand and umpty-umpth time: NO, THE PILL DOES NOT CAUSE ABORTIONS AND INFERTILITY, YOU FUCKING IDIOT. It prevents them by preventing ovulation! Hey, kiddies, see what happens when you don’t have comprehensive sex ed, but you DO have purity culture? You get poopy everywhere! And just think, Drumpf hired this. Drumpf hired Teh Stoopid. But he has a YUGE brain! The YUGEST!!!

2. Bryan Fucking Fischer. Oh dear, someone has forgotten Article 11 of the Treaty of Tripoli. Anybody want to remind him of what it says? Because it’s still valid to this day…

3. Paul Fucking Ryan. How scared is this chickenshit? So scared that he had to hire six security guards to stop a petition from being delivered to his office. Rugged individualists are such fragile snowflakes, aren’t they? PS: Lest you think the graphic below is an exaggeration, I can assure you it is NOT. 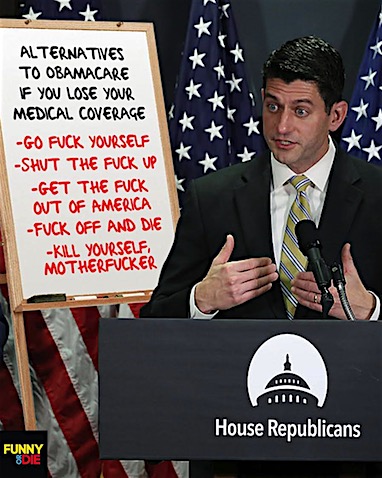 4. Shai Fucking Masot. Surprise! Repugs in the US are not the only ones adept at wanking an election in their favor. Israeli “diplomats” in the UK are the same! Gee, I wonder where they learned THAT from! PS: Oh look, they tried to undermine Jeremy Corbyn, too. What a pity no one was fooled. PPS: Sign, sign, sign!

5. Don Fucking MacIntyre. Oh look, here’s one of those imbeciles that Neil Fucking Macdonald thinks we should stop snarking about because being ridiculed somehow “empowers” them. As though listening to them politely and treating their bullshit as equal to fact somehow doesn’t do that.

6. Martin Fucking Shkreli. Oh look, PharmaBro is back in the news again! And this time it’s for harassing a Teen Vogue writer for daring to criticize his boy, Der Drumpf. And of course, he’s going the SEXUAL harassment route, because bros gonna bro, and got his troll army to brigade her, too. Creepy is as creepy does, and this douchebag is a creepo supremo. (Also, barely literate troll is barely literate.) 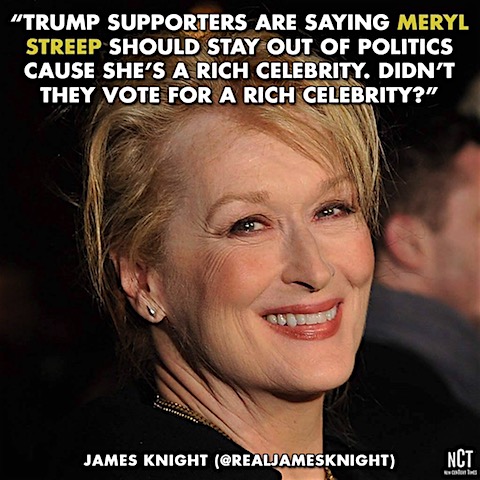 7. Jim Fucking Crichton. When a little girl has to ask her mother tearful questions about the N-word you said in her presence, that’s when you KNOW you’re a racist. But I guess mom and daughter are the real racists for making an issue of your racism, eh?

8. James O’Fucking Keefe. Oh dear, yet another prank “gotcha” video by the ineptly-named Project Veritas, gone belly-up before it could even be shot. How embarrassing! I guess he’ll just have to disrupt the Drumpf Inaugural Farce all by his widdle wonesome!

9. Kevin O’Fucking Leary. Oh look who was in Florida, addressing all the Con-job snowbirds. Yeah, that guy from Dragons’ Den, the one who thinks he’s gonna be Drumpf of the North. How about NO? Also, fuck Drumpf and fuck YOU for calling him “king”. King of piss is all he is.

Hey 1% shill, go cry harder about reverse racism and other imaginary shit. And this time, put some real feeling into it, because no one is fooled. Or, in other words: You’re not earning your inflated salary. PS: And looky here. I think we finally know why she doesn’t sound sincere!

11. Kellyanne Fucking Conway. Judge Drumpf by what’s in his heart, not what’s coming out of his mouth? Ooooooo, girl, considering that whole PEEOTUS story that just came out, you sure picked the wrong choice of words there! And what’s in the heart of a man who hires prostitutes to piss on a bed the Obamas slept in, anyway? (For that matter: WHAT FUCKING HEART???) PS: Ooooo, this “worst instincts” stuff sure opens up its own can of worms, does it not?

12. Ayelet Fucking Shaked. Oh lord, it’s her again. Ms. Little Snakes. And once more, she falls on the side of settlers, colonization, and apartheid — and of course, good ol’ Nazified Der Drumpf. How I wish a wall would fall on HER. 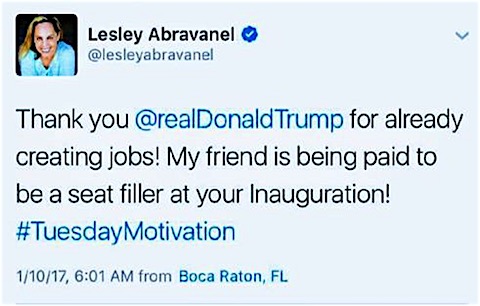 13. Yelena Fucking Mizulina. Domestic violence is a whole lot more than just “a slap”. But thanks for letting abusers off with no more than one of those on the wrist. And thanks for telling the world that Russian family culture and traditions are really just all about the patriarchy and the beatings! You actually managed to make Pooty-Poot look good, Serena Joy.

14. Marie Fucking Osmond. Much as it pains me to include someone I watched on TV as a kid, include her I must…because Marie is one of those “we have to unite” ones. Never mind that the US is being called upon to “unite” behind a man whose entire campaign is built on divisiveness, and whose entire career is built on fraud. No, she’s volunteering to sing at the inaugural farce because it’s the uniting thing to do! Hey, Marie? If they tap you, please sing “Paper Roses”…and dedicate it to the Drumpfs’ marriage.

15. Al Fucking D’Amato. Meanwhile, on board a plane, a former US senator and current Drumpf supporter tried to lead a passenger revolt…and got ejected for it. Buhbye, bozo! 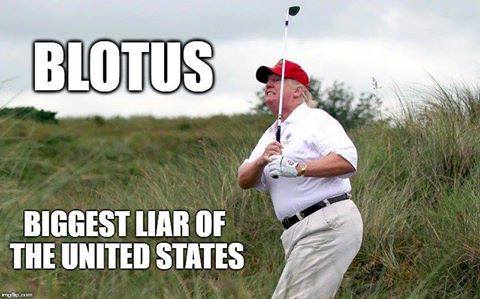 16. Amanda Fucking Willis. Because it wouldn’t be a wankapedia without someone from Florida screwing everything up royally, here’s Florida Woman…getting rip-roaring drunk on Fireball whisky at her best friend’s wedding reception, then getting into a brawl and stealing the best man’s car and almost running him over with it. Maid of Honor is clearly becoming a term of irony these days.

17. Peter Fucking Thiel. Oh look, it’s the case for kakistocracy, being made by a pile of ca-ca. Freedom from corruption is “boring” and a “bad thing”? Funny you should say that, Petey. Because if not for your influence — dare I call it INTERFERENCE? — the most crooked and corrupt administration in US history (if not the entire world) wouldn’t be about to take office. Yeah, that’s right, I’m not blaming the Russians for that…why would I need to when the real problem is so much closer at hand, and at home?

18. Bill O’Fucking Reilly. Yeah, HIM again. And he’s a LITERAL wanker this week. Turns out that Andrea Mackris wasn’t the only FUX Snooze employee he harassed with his gross-ass sexual fantasies. There was another woman, and her name is Juliet Huddy. And at least once, he called her up while he was literally wanking. Billo, at long last, have you no shame? 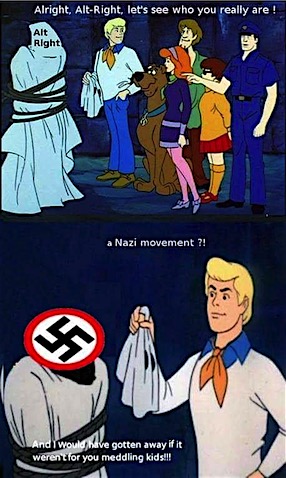 19 and 20. Jack Fucking Posobiec and Tim Fucking Gionet. “Rape Melania”? Now, now, you “alt”-Reich dumpster fires, don’t be giving Der Drumpf any more vile ideas. Seems to me he’s raped quite enough women and girls as it is. Also, ha, ha — your unmasking sure looks good on you, Nazi-boys!

21. Richard Fucking Spencer. And speaking of Nazi-boys, look who’s moving to Washington, DC. Yup, the dowdy — oh sorry, “dapper” suit-and-tie Nazi from Montana who thinks he’s started something. With his ugly haircut and poorly pronounced German? Don’t make me fucking laugh. Oh wait, he couldn’t even scare up an extra $60 for a measly parade permit to scare the Jews back home! Ha, ha. Whoops, there I go, laughing at fascists again. I just can’t help it!

22. Andrew Fucking Anglin. And just to round out the list of Nazi wankers, here’s this guy, whining about how he hasn’t heard back from the ACLU yet. Well, fucking DUH, dude — do you seriously think your plan to harass Jews constitutes “free speech”? There’s a reason why hate-crime legislation is actually popular, and no, it’s not an alien lizard Rothschild conspiracy! 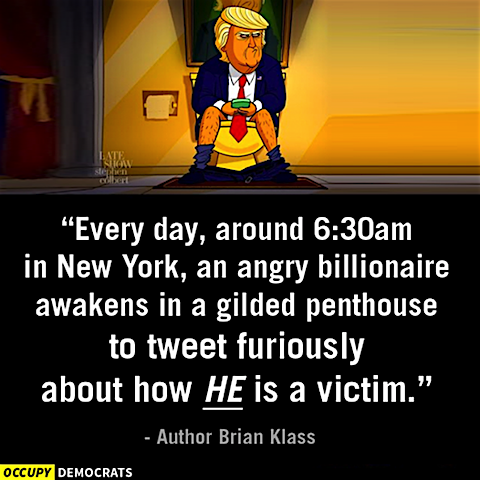 24. Kellie Fucking Leitch. “Drain the [Rideau] Canal of influence paddlers [sic] and lobbyists”, she says…while holding expensive fundraisers, attended by lobbyists, for herself. Does this woman even listen to herself? PS: Apparently not. And she’s forgotten another thing: Smart or stupid is in what you do, not in what’s tagged onto your name!

25. Ben Fucking Carson. It’s not his intention to do anything to benefit any American, he says? Well, THAT’s obvious! And just think, kiddies, this man has an MD. He and #24 are proof that you don’t need much in the way of brains or a conscience to become a doctor, and that’s fucking SCARY.

26. Paul Fucking Anka. He’s planning to sing a modified version of “My Way” for his ol’ buddy Drumpf’s inauguration? Well, then, I think it’s only fair that we all refer to him from now on as Paul Wanka. PS: Well, looky here. Somebody IS intimidated, after all! 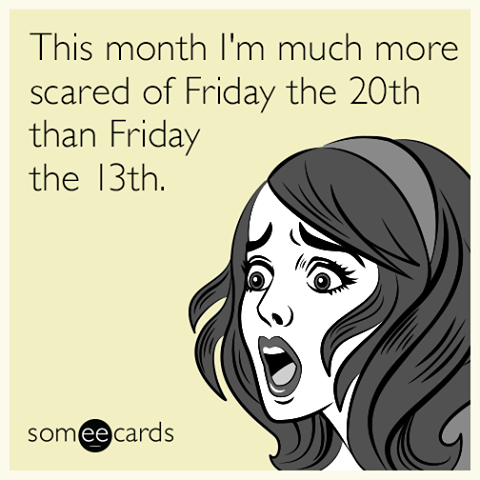 27. Marine Le Fucking Pen. What have we here? Oh, nothing. Just one fascist paying a social call to another at his humble abode. Why do you ask?

28. Bruce Fucking Borders. So, trans people won’t be able to change their birth certificates in Indiana, thanks to him? I would ask what unlucky star he was born under, but I just know it’s Anus Major.

29. Cory Fucking Booker. He dropped his prog-cred in the toilet yesterday by voting against cheaper drugs from Canada; now he’s flushed it by letting Ivanka Fucking Drumpf host a ritzy fundraiser for him. You know what to do, New Jersey readers…don’t you?

30. Bob Fucking Thorpe. Just like #28, he’s bound and determined to drag his state back into the Dark Ages. Arizona, your move! 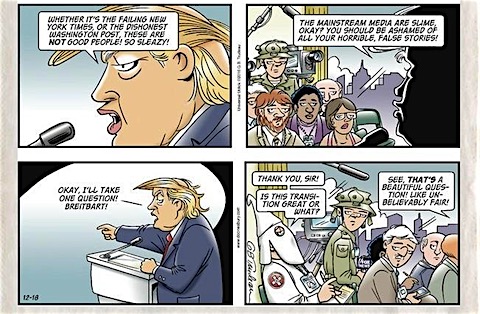 And finally, to the 13 fucking Democrats who voted against cheaper drugs for their fellow US citizens. I’ve already noted #29 as being one of them. What were their motives? In a word, MOOLAH. The drug companies bought and paid for them. And it looks like they got their wish…IN THE DEAD OF NIGHT, LIKE THE TRUE COWARDS THEY ALL ARE. May your political careers be nasty, brutish and short, you guys, because YOU are the reason your fellow US-Americans have lost confidence in the Democratic party. When there’s so little difference between you and your Repug opponents, what’s the use of voting at all?

And that, incidentally, is why you’re in such deep shit now. Time to stop blaming the Russkies, and time to start looking in the mirror. Long and hard.