Looks like Donnie’s in for a rough time during his time in Merry Old Brexitlandia. I mean, just look what greeted him from the plane earlier today: 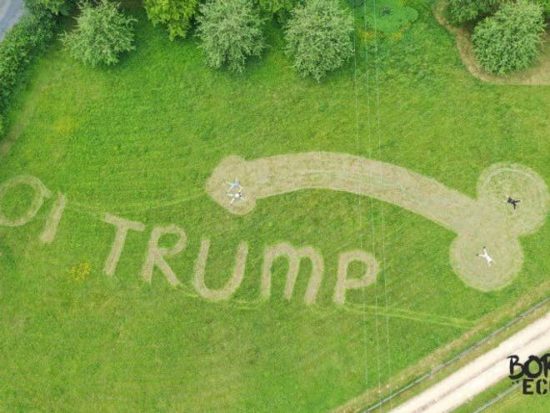 And in case you think this was just a sausagefest, it was actually part of a serious protest:

A teenager has mowed an anti-Trump message, complete with a giant penis, into the grass of his family home ahead of the US president’s UK state visit.

Ollie Nancarrow spent his weekend mowing the words “Oi Trump” into his lawn, near Hatfield Heath, in Essex.

The 18-year-old also used the mower to etch a giant polar bear, penis and the words “climate change is real” into the grass, according to the Bishop’s Stortford Independent.

The A-level student hopes that the US president will spot his creation as Air Force One approaches Stansted Airport, which is near Hatfield Heath, on Monday morning.

“Donald Trump and his denial of climate change are not welcome and I want him to be fully aware of that when he flies in to Stansted on Monday,” he said.

Oi, indeed. I sure hope he saw that and takes it to heart.

And then there’s what was projected onto the Tower of London last night: 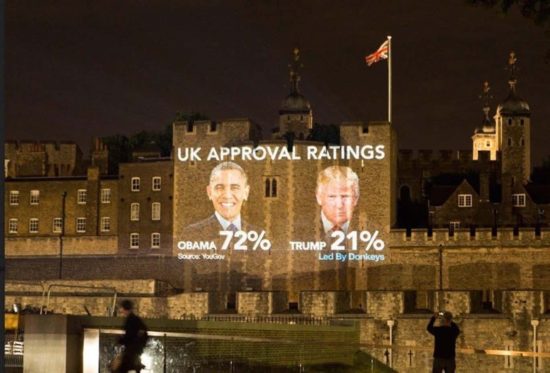 Heh, nothing like getting your egotistical nose rubbed into that Russian hotel mattress you paid those Russian call girls to befoul.

And of course, there’s also what’s set to follow him everywhere:

And the other embarrassing thing that’s set to follow him everywhere he, uh, GOES:

And oh yeah…his own words, just following him wherever the fuck he goes:

But hey! At least Melania should be amused. That is, if all that Botox ever lets her show any sign of it.

This entry was posted in Der Drumpf, Environmentally Ill, If You REALLY Care, Merry Old England, Teh Russkies. Bookmark the permalink.